The ever-rising cost of insurance premiums of Memphis Belle, coupled with steadily rising fuel and labor costs have forced the hands of the board of trustees of the National Warplane Museum to cancel the lease on one of their best-known aircraft.

The B-17 bomber that starred in the film Memphis Belle will be returned to its owners.

The B-17 at the Museum is not the actual plane, nicknamed Memphis Belle, that was the first heavy bomber to fly 25 combat missions over Europe without the loss of any crew members.

This B-17 took part in the eponymous Hollywood film in 1990. 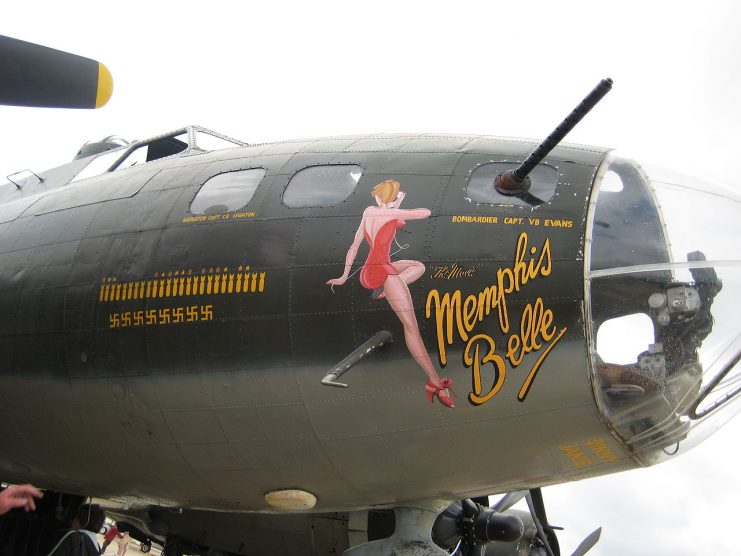 The significant increase in the cost of spares, as well as the labor required to undertake the maintenance, along with the hourly burn thousands of dollars for fuel, made the plane an expensive part of their exhibits.

The straw that broke the camel’s back was the anticipated 50 to 100% increase in their insurance premiums.

Bob Dauer, a spokesman for the Museum said the reason to return the plane was made solely for cost reasons.

The late cancellation of air shows also contributed to the Museum’s inability to continue shouldering the costs of keeping the plane.  Air shows are a significant component of the revenue stream for the Museum.

Dauer went on to say that it takes a considerable amount of human labor to generate sufficient income to cover the costs associated with the plane.

The Museum is staffed with volunteer workers, and they could no longer raise adequate funds to maintain the Memphis Belle B-17.

In a Facebook post, the Museum’s director of maintenance and restoration of the aircraft, Craig Wadsworth, said that the current insurance premium was about $90,000 per year, and they had been advised that the increase they were facing would be between 50 and 100%.

Wadsworth speculated that the enormous proposed increase could be due to a crash of a similar B-17 that occurred in Connecticut in October 2019.

In that crash, seven people lost their lives.  He stressed that this was a guess, but he had little faith in the logic applied by insurance companies and believed that the Connecticut crash was influencing the amount being charged by their insurers.

The Museum took possession of the Memphis Belle B-17 in 2016, from the family of David Tallichet.

He had died, and his family was dealing with his extensive collection of vintage aircraft that were stored in California.  The Memphis Belle is one of only 35 B-17’s that are still in existence.

When the Museum took possession of the plane, Wadsworth was delighted and said that it was the culmination of a life-long dream.

He remembered watching old black and white films such as “Wing and a Prayer,” and “Twelve O’clock High” when he was a young lad in the 1960s. He was thrilled that the Museum had been able to acquire the B-17 as an asset.

The B-17 is currently being stored in Florida at Kissimmee Gateway Airport, and the Museum says that it will remain there for the foreseeable future.

The trustees thanked the Tallichet family for allowing the Museum to take care of the B-17 for the past four years.

While they can no longer continue paying for the plane’s upkeep, they were delighted that the Tallichet family had stated their commitment to ensuring that this piece of flying history was kept operational.

They also hoped that it would return to the Museum for special occasions in the future.

The trustees were investigating if the Memphis Belle could reside with the National Warplane Museum during the summer months in some form of limited manner.

The discussions are around placing the plane on the tarmac and allowing tours with a few demonstration flights.  These discussions are in the early stages, and they are not close to a final agreement at this time.

Dauer admitted that the Memphis Belle was a massive drawcard for the Museum but said that he did not believe that attendance numbers would significantly be affected by the loss of the plane.

In spite of the loss of the B-17, museum staff are hard at work planning their 40th Anniversary air show, which will take place in July 2020.