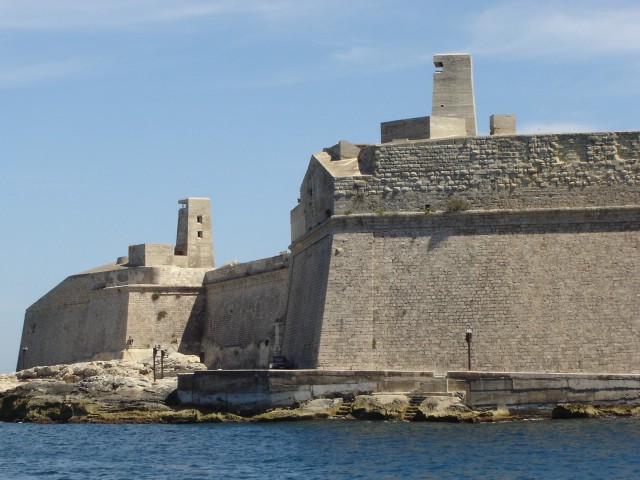 The Carafa Enceinte. The towers on top of the bastions are concrete coastal defences built in World War II, Via

The garrison of Fort St Elmo now faced constant bombardments which were followed by assaults upon the walls in which they had to confront the waves of Ottoman soldiers that were hurled at them.  Some began to waver in their resolve and felt that only a merciless commander-in-chief would keep them at the walls of St Elmo instead of withdrawing them to one of the heavily fortified castles like St Angelo, Birgu or Senglea.

La Valette was not merciless. He certainly was not indifferent to the loss of life as was his counterpart Mustapha Pasha. Valette knew, though, that every day that he could halt the Turkish advance before the walls of Fort St Emo meant a greater chance for the survival of the island. La Valette’s hopes for the arrival of a relief force lay with Don Garcia De Toledo, the Spanish governor of Sicily. The Knights of St John who were arriving in Sicily to join the relief force were clamouring to be conveyed across the intervening sea to support their brethren at Malta.

Despite their growing fury at Don Garcia for delaying their departure, the governor would not be forced into any hasty action that might end in disaster for the relief force.  Don Garcia was fully aware of the fact that nothing stood between the Turkish forces and southern Europe except for the island of Malta. If Malta was to be relieved, the force brought to bear against Mustapha Pasha must be such as to offer at the very least a chance of equitable combat. To send small groups of soldiers out in a few galleys at a time was to ensure their destruction at the hands of Admiral Piali’s navy. With the passing of each day the relief force was growing and in time Don Garcia would feel confident enough to hazard a crossing to Malta. At present however he would not hear of it. While the Knights of St John complained bitterly to the tardy Spanish governor their brethren were fighting and dying in the ruins of St Elmo.

As the Ottoman grip upon Fort St Elmo tightened, the only means of ensuring its continued perseverance was through injections of soldiers and supplies in boats from across the surrounding forts.  However, La Valette came to a point where he decided not to order more men into this deadly inferno but rather to call for volunteers only. In an age in which chivalry and bravery were synonymous with the status of a Knight and when hardship and toil had fortified the Maltese inhabitants to the hardships of life, Valette knew that there would be no shortage of volunteers.

He was to discover that bravery has the power to move men to great sacrifice and no more so than when heard that two Jewish volunteers entered the boats to go and fight and die beside men whose very religion was abhorrent to them.  The historians of the time recorded with amazement their utter surprise at the chivalry of men who would volunteer for a post of certain death in defense of a cause which was not even their own.  Such was the power of courage to inspire man to sacrifice even if it meant fighting side by side with men who they might regard in normal circumstances even as their enemy.