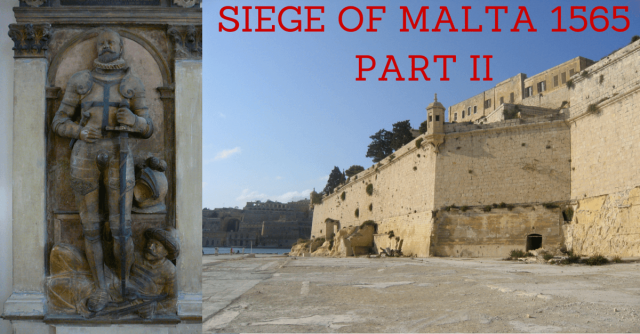 At the head of the Knights of Saint John who stood ready to repel the invading Muslim army was the renowned Grand Master Jean Parisot de Valette.  Valette had entered the Order as a youth and had risen through the ranks till, at the age of 62, he was appointed Grand Master of the Order.   Valette was a brilliant strategist who was determined to make use of the natural terrain of Malta to his advantage.

Malta, very much a barren rock in the middle of the Mediterranean, was well suited to provide excellent anchorage for the Order’s galleys and an uncongenial and hostile environment to a besieging army.  Given the condition of the island, Valette decided his best strategy would be to avoid the pitfall of meeting the invasion at the beaches and instead to allow the Muslims to debouch upon the island and to force them to take each fortified bastion through long and costly sieges.

In addition, Valette ordered all the Maltese inhabitants to shelter within the castles of the Order and to bring all of the island’s harvest with them.   Anything that might sustain the Muslims was destroyed and the wells poisoned.  Valette also knew that Malta was an island that was constantly swept by inclement weather and that the first priority of the invading enemy would be to secure a safe anchorage for the sultan’s fleet.

The harbour of Marscumuscetto was the most ideal spot for the Muslims to safely anchor their ships and for this reason, Valette strengthened Fort St Elmo which stood at the entrance to the harbour  and which Mustapha Pasha and Piali would have to conquer before any further investiture of the island could occur.  Thus, because of Valette’s overall strategy of a war of attrition and the Muslim need for safe anchorage, Fort St Elmo was to become the hinge upon which the entire fortune of the Muslim campaign was to turn.

Don Garcia de Toledo, the Spanish viceroy of Sicily, promised to assist the Knights of Saint John as soon as he could muster a relief force sufficient to repel the Turks.  In the meantime, members of the Order of Saint John who were stationed throughout Europe began to make their way towards Sicily in the hope of finding passage to Malta and thus being able to assist their brethren against the sultan’s army.

On the 18th May, 1565, the massive Ottoman armada anchored off the coast of the island and the pride of Sultan Suleiman’s great military state disembarked and began to lay siege to Fort St Elmo.  The Turks brought up their cannon and emplaced them on the surrounding Mount Scriberras and the northern arm of Marsamuscetto Harbour.  At the command of Mustapha Pasha an enormous barrage upon the tiny antiquated star-shaped Fort St Elmo.  The bombardment marked the beginning of one of the bloodiest and most hotly contested campaigns the might of the Ottoman Empire had ever encountered.