A Bridge Too Far is based on the book with the same title, which was written in 1974 by the author Cornelius Ryan. The movie was adapted afterward by William Goldman and screened in 1977; it is known as one of the most epic War films. This movie had Richard P. Levine and Joseph E. Levine as producers and Richard Attenborough as director.

This movie narrates the true story of Operation Market Garden (and its ultimate failure) that occurred during World War 2. This Operation was an attempt by the Allied forces to push through the German lines and take several tactical bridges in the Netherlands. The main bridge was at Arnhem, and the main point of this Operation was to outflank German defenses so that they could end the War in time for Christmas in 1944.

The title of the movie comes from a comment (unconfirmed) that is said to have come from British Lieutenant-General Frederick Browning, who was a Deputy Commander of the First Allied Airborne Army. He’d supposedly said ‘I think we may be going a bridge too far’ before the operation to Field Marshal Bernard Montgomery (architect of the Operation).

This was the earliest ever war movie in which all actors were placed in a boot camp before filming. Richard Attenborough placed a lot of the extras in the film (mainly soldiers) through a mini version of this boot camp and housed them in barracks throughout filming.

Major Fuller, the intelligence officer in the movie, was actually named Brian Urquhart. They renamed this minor character as the character played by Sean Connery was also known historically as Roy Urquhart (commander of the British Airforce Division

The Arnhem Bridge, in the nearby town of Deventer

The Arnhem Bridge depicted in the movie was actually a bridge North of Arnhem and is in Deventer. A replica of the Arnhem Bridge still existed in the 1970’s. However, it was sitting in a landscape that was now too modern and was not suitable to use as a city in the 1940’s.

The filming that focused on the air scenes were all completed in 1976, at the beginning of September. This culminated in a number of air drops of approximately 1,000 men, as well as supplies being dropped by several Dakota aircraft. Joseph E. Levine Presents Incorporated (the film company) procured these Dakotas.

All aircraft that were used had to be licensed to officially carry passengers and be fully registered. There was originally a deal to purchase ten, but this deal failed when airframes on two failed to have the required jump doors. In total, eleven Dakotas were brought; four were bought by Levine and seven more were loaned while filming.

Frost objected to a scene

Lt. Colonel Frost had objections to a particular scene where Anthony Hopkins, the actor portraying him was to run across a road while under fire. Lt Frost claimed he constantly walked. The scene was left alone however as they thought the audience wouldn’t believe that he walked.

Hopkins, himself, stated that he was unable to make himself walk as he could not stay calm with the gunfire and fake explosions that were in that scene.

The officer with the Umbrella

Major Harry Carlyle, the character that wielded an umbrella, was based on a real-life character – Major Allison Digby Tatham-Warter who famously said that he ‘carried the umbrella because he could never remember the password and it would be quite obvious to anyone that the bloody fool carrying the umbrella could only be an Englishman.’

Major Tatham-Warter differed from Carlyle however in that he survived this battle and then was subsequently captured by the German Army. He escaped from them and assisted hundreds of soldiers to safety (with the help of the Dutch Resistance). 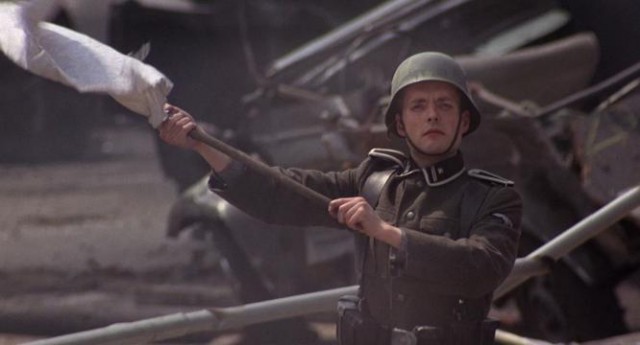 Maj. Harry Carlyle: Rather interesting development, sir. [to the German] That’s far enough! We can hear you from there!
SS Panzer Officer: My general says there is no point in continuing this fighting! He is willing to discuss a surrender![Short pause; the German waits for an answer, Frost thinks]
Lt. Col. John Frost: Tell him to go to hell.
Maj. Harry Carlyle: We haven’t the proper facilities to take you all prisoner! Sorry!
SS Panzer Officer: [confused] What?
Maj. Harry Carlyle: We’d like to, but we can’t accept your surrender! Was there anything else?[German officer walks off silently]
Lt. Col. John Frost: Right.[the officer returns to Obergruppenführer Bittrich – they converse in German]
SS Panzer Officer: They rejected our surrender offer. What are your orders, Herr General?Obergruppenführer Bittrich: Flatten Arnhem 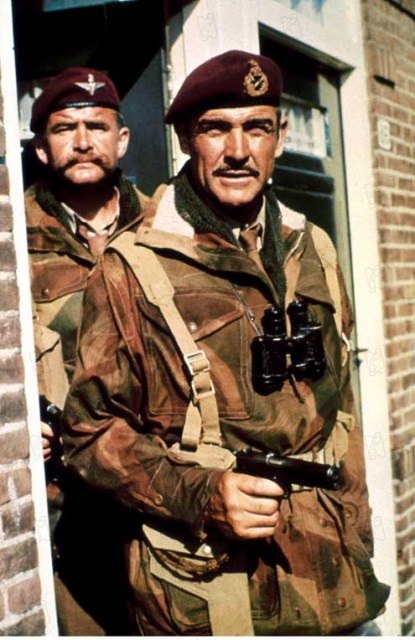 While General Urquhart was hiding from the Germans in an attic, during Operation Market Garden, he kept watching the enormous mustache that Captain Cleminson sported and kept thinking that ‘it looked weird.’

When filming the assault, led by the Americans, on the Bridge at Nijmegen, they named it the ‘Million Dollar Hour’. This was due to the fact they only had consent to shoot between 8-9 o’clock on October 3rd, 1976. This was due to the heavy traffic the filming would stop.

If this scene wasn’t complete within this hour they would have needed to reschedule; this would have cost a minimum of one million dollars (including the overtime of Redford).

To ensure this was done right the first time Attenborough ensured that all corpses, or the actors playing them, kept their eyes shut at all times in this hour period. 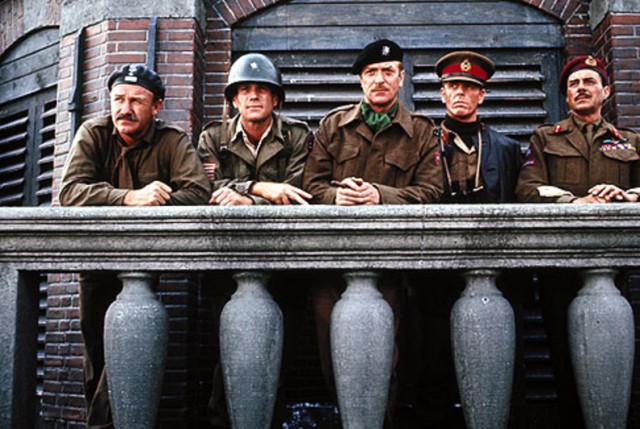 Brig. Gen. James Gavin: So that’s it. We’re pulling them out. It was Nijmegen.
Lt. Col. J.O.E. Vandeleur: It was the single road getting to Nijmegen.
Lt. Gen. Horrocks: No, it was after Nijmegen.
Lt. Gen. Frederick “Boy” Browning: And the fog, in England.
Maj. Gen. Stanislaw Sosabowski: Doesn’t matter what it was. When one man says to another, “I know what let’s do today, let’s play the war game.”… everybody dies.