As the Second World War was breaking out in Western Europe, the Soviet Union embarked on another war – one in which it would easily achieve its strategic aims, yet one which was also to leave the USSR bloodied and embarrassed. It was a conflict which would both encourage Hitler’s invasion of Russia and also allowed the Soviets to prepare a counter-attack against the Nazi invaders.

Though familiar with fighting in their own harsh winters, the Soviets were unprepared for just how bitter the Finnish cold would be. Tents were insufficient. Uniforms were not warm enough. The Russian supply lines were breaking down and the soldiers had not the supplies they needed. Ice, wind, and snow made the life of the invaders a living hell.

But like the men carrying them, the Soviet weapons suffered from the cold. Guns malfunctioned. Engines stalled. Motorized vehicles froze in the icy conditions. Even the colors of uniforms proved counter-productive, dark greens that would have provided camouflage elsewhere making men stand out against the frozen white and targets for Finnish snipers. 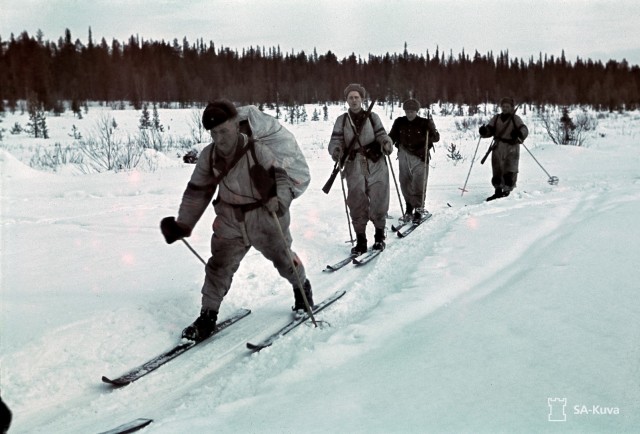 The defense of Finland was a classic example of what a smaller, less well-equipped army could achieve with courage, ingenuity, and knowledge of local conditions.

Finnish tactics adapted to the weather, the enemy forces, and the limitations of their own supplies. Troops on skis were able to move far more quickly and comfortably than the Soviet infantry, regularly out-maneuvering them. Bullets were scavenged from fallen enemies, helping to make up for the shortfall. Russian tank’s tracks were jammed with improvised devices to halt their advance.

The Molotov cocktail became the signature weapon of the war, and was so popular with Finnish troops that it was soon centrally manufactured.

Despite the existence of the puppet government, almost no-one in Finland favored the Soviet cause. The nation was united in the face of Russian aggression.

But it was Finland’s local neighbors who helped the Finns the most. Volunteers from Sweden, Denmark, Norway, Estonia, Hungary, and the Ukraine came to fight alongside the Finns. Fellow Scandinavian countries, in particular, had friendly relations with Finland and feared that the Soviets would invade them too. They supplied troops familiar with the climate and its ways of fighting, men who, like the Finns, they were able to ski into battle.

It was a peace the Soviets were willing to accept. The war had cost them hugely in terms of men, material, and reputation – it was a painful embarrassment they wanted to put behind them. Despite this, they held enough Finnish territory to seek terms that suited them.