Though World War II ended more than half a century ago, not all of the mysteries of that time in history have been solved. Questions still exist, still await answers – what happened to Adolf Hitler’s remains? Do unexploded hidden bombs sit waiting to detonate throughout Europe?

Was every secret code used during the war cracked? The answer to that final question is a stunning surprise: the skilled code breakers of the time weren’t able to crack every coded message sent during World War II. In fact, until recently, some messages sent by German agents were still coded, the world and the Allied Forces unsure of what the contents said.

Secret messages, intricate codes known only to certain militaries and certain individuals, and espionage have all played crucial roles in international conflicts and wars. Of course, with all of those encoded and encrypted messages comes the great effort to discover what secrets lie in them – and often, nations and their militaries are able to crack the codes. With entire teams devoted to code breaking, scrambling to discover the enemy’s hidden plans, it’s no surprise that many messages are intercepted and solved.

Although codebreakers in England, the United States, and other Allied nations worked tirelessly to crack the secret code that hid German messages from prying eyes, not every message saw success. Three lone messages eluded all codebreaking efforts: one found alongside the skeleton of a homing pigeon in 1982, two others left over from wartime codebreaking efforts at England’s Bletchley Park intelligence center.

Those messages garnered increasing interest as decades passed and not one expert could uncover their meaning. Each one was a jumbled group of odd letters in nonsensical combinations that left everyone stumped, and many began to believe that perhaps they would never be solved.

The Challenge of the Enigma Code

What was it that left the expert codebreakers of World War II struggling to uncover what lay hidden in those three impossible messages? While codebreakers of the time saw great success in deciphering many other messages, it was the code itself that proved the biggest challenge. Before and during the war, the German military relied on the Enigma Code to shroud every one of their messages in unreadable secrecy.

The Enigma Code was an incredible coding accomplishment, the most complex cipher system of the time – and it was nearly foolproof. As the Germans sent messages to different military divisions and units under the cover of the Enigma Code, the Allied forces felt the impact of the messages, for instance, as they suffered attack after attack by entire “wolf packs” of U-boats.

The Allied military leaders knew that they needed to find a way to intercept German communications and prevent even greater attacks and losses. So, Winston Churchill devised a plan. He ordered the Allied military’s brightest minds to decipher the German’s secret, complex code and set up a codebreaking headquarters at Bletchley Park. Celebrated cryptographers got to work – but they quickly found the Enigma Code more than a typical challenge.

They did not have to start from scratch, German military messages enciphered on the Enigma machine were first broken by the Polish Cipher Bureau, beginning in December 1932. This success was a result of efforts by three Polish cryptologists, Marian Rejewski, Jerzy Różycki and Henryk Zygalski, working for the Polish military intelligence. Rejewski reverse-engineered the device, using theoretical mathematics and material supplied by French military intelligence.

Subsequently, the three mathematicians designed mechanical devices for breaking Enigma ciphers, including the cryptologic bomb. From 1938 onwards, the Germans repeatedly added additional complexity to the Enigma machines, making decryption more difficult and requiring further equipment and personnel—more than the Poles could readily produce.

In July 1939, near Warsaw, the Poles initiated French and British military intelligence representatives into their Enigma-decryption techniques and equipment, including Zygalski sheets and the cryptologic bomb, and promised each delegation a Polish-reconstructed Enigma. The demonstration represented a vital basis for the later British continuation and effort.

Despite their best efforts and with the Polish help, it began to appear that the incredible German code was unbreakable. What made the Enigma Code so impenetrable was its method of creation: the Enigma machine. In 1942, German military intelligence began using the Enigma machine to encrypt its messages. Allied intelligence, however, failed to catch on; all intercepted messages were still approached with the belief that the Germans were using a less advanced cipher.

This mistake caused the Allies to suffer, as they missed crucial information that would have warned them of regular U-boat attacks on their ships. Throughout 1942, the Allied intelligence experts struggled to break the advanced Enigma Code and its new secrets. 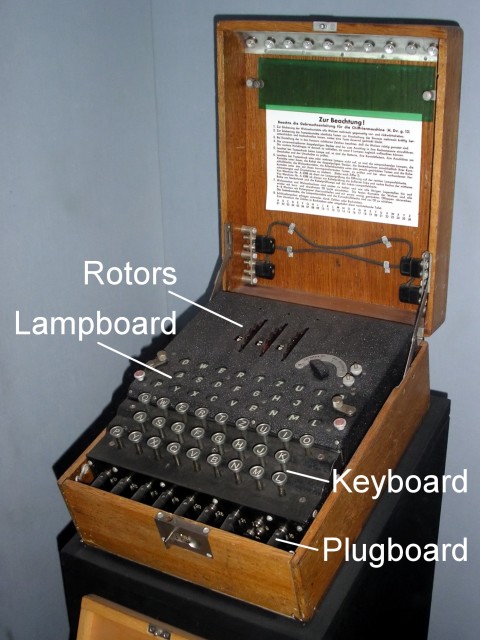 The new advancements in the code were, of course, purposeful. In an effort to confuse the Allied codebreakers and their technology, the Enigma encrypting machine used what was a called a “plugboard” to scramble messages and turn them into unreadable lines of letters.

The Germans would write out their desired message and send it through the electrical plugboard, which used an ever-changing rotor to churn out a unique coded message – essentially, the Enigma machine would turn a normal statement into what carefully crafted gibberish. To make decoding the message even more difficult, the machine’s plugboard would make sure to swap out pairs of letters. This tricky additional layer of encryption meant there were even more possible codes that the Allied codebreakers would have to crack.

Thanks to the early computer-like processors available to them, the Allied codebreakers at Bletchley Park were able to successfully intercept and decode thousands of German messages – but some messes still managed to befuddle them. Three of these messages that no Allied intelligence could crack each contained as many as 27 different five-letter code groups.

Though many tried after the war ended, those who work at Bletchley Park today (now known as the UK Government Communications Headquarters, or GCHQ) believed that the codes were impossible to break because no known German code book existed to help solve the mystery. For decades, it was thought that these particular messages were not only encoded, but given an extra level of protection with encrypted individual code groups.

The Codes Finally Get Cracked

So, what was the world to do? With no code book or information from the German military or its intelligence, and no expert codebreakers able to uncover the hidden messages hiding in those three mysterious groups of text, was there no answer to ever be found? Although it took decades, all one of these unbroken codes needed was a bit of modern technology and an interested amateur cryptographer.

About 50 years after World War II, a cryptography journal titled Cryptologia decided to publish three of the unsolved coded messages. This introduced the mystery – and challenge – to hundreds of thousands of individuals around the world, and opened up the possibility of breaking their code.

Countless readers of Cryptologia and codebreaking fans decided to try their hands at uncovering what had been hidden to the most skilled Allied code crackers during the war. Private individuals and cryptography organizations around the world offered contests for those interested in tackling these trickiest of messages. And suddenly, in 2006, a breakthrough occurred.

Stefan Krah, a professional violinist born in Germany, surprised the world when he announced he had broken one of the unsolved messages from World War II. Krah wasn’t someone with an in-depth background in military intelligence, nor was he a skilled codebreaker; instead, he was simply a fan of cryptography, one who decided that he might be able to combine his love of cracking codes with his interest in open-source software.

When Krah came across the unsolved messages, he wrote a code-breaking software program named M4 (a name meant to honor the M4 Enigma machine that originally coded the messages) and reached out to fellow cryptology fans online.

Together, Krah and about 45 assistants got the program up and running on a grid of home computers all connected via the internet. As Krah’s software ran algorithms and tried millions of code combinations, it took the human effort out of the code-cracking process as it worked to recreate possible Enigma plugboard creations.

When this exciting breakthrough was made, historians checked Krah’s message against the records of World War II – and the information in the once-hidden message was found to be correct. According to German records, the decoded message was easily verifiable. On November 25th, 1942, German Naval Commander Kapitanleutnant Hartwog Looks did send a message to others in the Navy, carefully encoded and encrypted in Enigma.

Can Krah Crack the Code for Good?

Stefan Krah’s software program brought an incredible breakthrough, one more than half a century in the making. The M4 program succeeded where countless trained, experienced, and highly intelligent codebreakers could not – but, as Krah remarked to BBC News, it’s not because the program is more intelligent or skilled.

Instead, M4 relies on a combination of “brute force” and trackable algorithms, and its speed enables it to move through hundreds of thousands of possible Enigma codes far faster than any human cryptography expert. With an ever-growing network of computers running M4, Krah and all those who run his program around the world are still hard at work cracking those last two messages from World War II.

Though the urgency and importance of these messages have faded with the resolution of that last world war, the codes still mystify and intrigue cryptographers and military intelligence alike. Despite the many Allied successes – and overall victory – throughout World War II, those deeply encrypted messages still shrouded in the Enigma Code represent just how difficult it was to intercept German intelligence so many years ago.

Still known today as one of the most foolproof codes in history, the Enigma Code was an incredible feat for those who cracked its messages and remains something of a mystery as we work to uncover the very last remnants of its existence today.