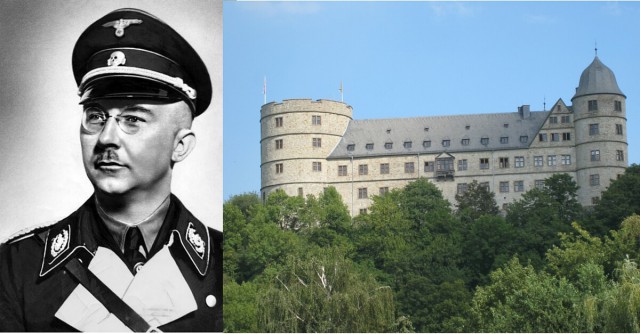 Heinrich Himmler was one of the most vicious mass murderers in recorded history and was the architect of the Holocaust. He was born in Munich in 1900 to devout Roman Catholic parents and served as a junior officer in the German army during the First World War.

By 1922, he was already interested in what he referred to in his diaries as “The Jewish question”. His diary entries of the period are littered with anti-Semitic remarks.

A year later Himmler was a member of the Nazi party, and by 1924 he had forsaken Catholicism for an increasing interest in occult practices and anti-Semitism. The course of his future life was already set, he was extremely ambitious, and in 1925 he joined the SS, becoming a district leader.

Promotion to deputy propaganda chief followed in 1927, and later that year Himmler explained his vision of the future to Hitler – he wanted to form the SS into SS into an elite powerful, racially pure personal bodyguard for the Führer.

Himmler’s philosophy resonated with Hitler, who appointed him as Deputy Reichsführer-SS. Himmler’s dream of becoming one of the most powerful men in Nazi Germany looked set to materialise.

By 1933, the Nazis were in power, and Himmler was setting up Dachau, the first Nazi concentration camp, and in 1939, he masterminded an operation to plant German soldiers disguised as Polish troops on the German/Polish border to carry out fake attacks on German villages.

This provided Hitler with the excuse he needed to invade Poland, precipitating the Second World War.

Himmler was a fantasist, and as his power grew he exhibited increasing signs of mental instability. He set himself up in 17th century Wewelsburg castle that is situated in North Rhine-Westphalia, Germany.

The castle was to be used a ‘cultural centre’ for senior members of the SS, and meetings were called by Himmler, who dressed as a Mediaeval Prince for the occasion.  Obsessed with stories of King Arthur and the Knights of the round table, he filled the castle with SS artefacts, daggers, specially marked chairs and silverware, and made plans to convert the surrounding area into an idealised Arian village.  It was in Wewelsburg that plans were made for the Holocaust – the killing of millions of Jews.

Himmler committed suicide at the end of the war when he had been captured by the Allies.

Following a £10 million restoration, Wewelsburg has been opened to the public. Schoolchildren and Public service employees make compulsory visits so that they can learn about of the worst excesses of the Nazi regime.

However, critics of the “museum of death” have cautioned that the castle could turn into a shrine and a pilgrimage site for the far right neo-Nazis.

“Unwanted right wing visitors who want to make the castle a pilgrimage site will be kicked out,” was the strong answer of Kirsten John-Stucke, the museum’s deputy director.