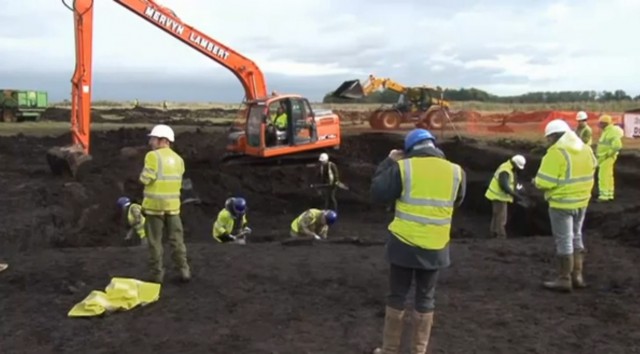 The dig to retrieve the remains of a World War Two Spitfire has continued after it was halted earlier because human remains were discovered.

The Spitfire crashed in a peat bog in the field 75 years ago and its remains have stayed there ever since.

The excavations had already begun and researchers were able to retrieve a number of remaining parts of the plane. The area is due to be restored to a wetlands site as part of a wider conservation project, so the team of archaeologists wanted to retrieve the plane before this is complete and the plane could never be touched again.

The land is owned by the Wildlife Trust for Bedfordshire, Cambridgeshire and Northamptonshire and is being converted back into natural surroundings and will join up various fenlands around the site creating 14 square miles of fen.

The Spitfire was being flown by pilot Harold Penketh who sadly died in the crash at just 20 years old. It crashed towards the end of 1940 and he was on a training flight when it is believed that the oxygen failed in the plane.

The pilot’s remains were removed from the site and he received a full military funeral back in his hometown of Brighton but now more of his remains were discovered. The plane had crashed nose down into the ground so there were only small pieces left and it was never recovered during the chaos of the war. Then over the years the pieces gradually sunk into the ground.

WW2 Aero reports that archaeologists have discovered the machine’s Merlin engine, starter motor and propeller, one of its fuel tanks, part of its oxygen system, a head rest, bullets, and part of a wing, in addition to many more components.

Several much more personal items have also been discovered, including a flying helmet with radio earpieces, a watch, and a cigarette case emblazoned with the initials of the pilot. A button from the pilot’s uniform was also unearthed and identified as one of the last things Penketh would have handled before the fateful flight.

It was through a geophysical survey undertaken by Cranfield University that showed where the pieces of aircraft were and so the team of archaeologists could begin their dig in exactly the right place.

The Defence Archaeology Group is involved and also supports a wider scheme to help recover injured veterans and army personnel.

The landscape of peat is difficult to dig in but it is hoped that the plane will be better preserved due to the high levels of water, The Telegraph reports.

It was the ideal time to recover the Mark 1 Spitfire – on the same year as the 75th anniversary of the Battle of Britain.

Once the dig is finished the hole will be filled and covered over.