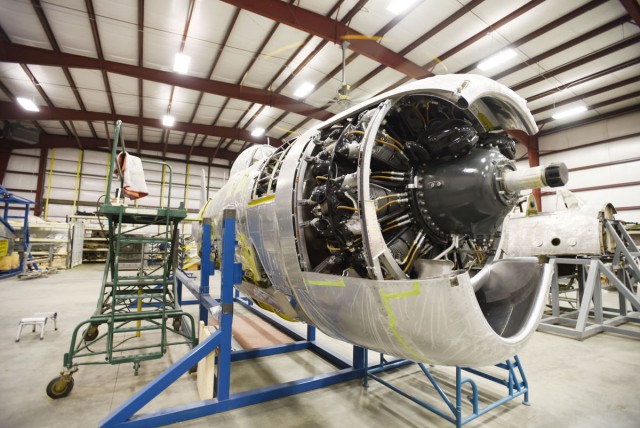 A World War Two P-47 aircraft called ‘Dottie Mae’ is being lovingly restored after a fatal crash in the last days of the war.

The Dottie Mae survived the entire war serving in more than 90 missions. She tragically crashed, not in action, but on a celebratory flight over Austria in the final days of the war. The P-47 was being flown by pilot Lieutenant Henry Mohr over Austria.

Mohr came in low, but too low, and hit the water on a lake. Luckily Mohr was rescued before the aircraft sank, but the Dottie Mae remained at the bottom of the lake for over 60 years.

In the summer of 2005 the Dottie Mae was finally pulled out from the bottom of the lake and was transported to Caldwell in Idaho, US. A local Caldwell company, Vintage Airframes, is now investing in restoring the aircraft and hopes to eventually see her fly again.

Mike Breshears is leading the restoration and has said that the P-47 is one of the most complex aircraft he has ever worked on. Vintage Airframes has been working on the plane since 2010 and thinks it will take about one more year for her to be in flying condition.

The plane is owned by a private individual in California, so once the restoration is complete the Dottie Mae will be transported there to live out her days.

Vintage Frames are using original 1944 war time designs of the plane to inform its restoration, right down to every detail such as the colour of the rivets.

Breshears says that the aircraft is actually in good condition considering it had remained under water for 60 years. Even the name Dottie Mae could be seen painted on the side of the aircraft along with some artwork on the nose of the plane.

Many P-47s were scrapped at the end of the war and many were left at airfields in France. So this is one of the last surviving.

The Dottie Mae was originally built in Evansville, Indiana, in 1944 and was one of just over 1000 that were made there. She was deployed to the 9th Air Force and was sent to fight in France, the Idaho Press-Tribune reports.

As a brand new plane her pilot was Lieutenant Larry Kuhl and it was he who named her the Dottie Mae after his wife. Kuhl is still alive and likes to keep up to date with her restoration. He has even made the trip to Caldwell to visit the plane along with other original crew members for a reunion.