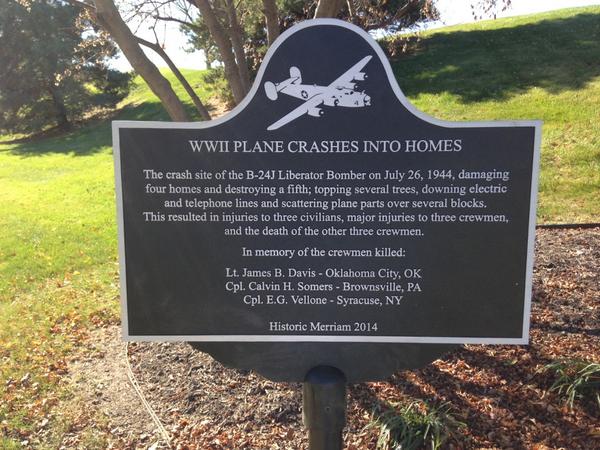 The plaque before it was stolen.

A plaque that was placed at the site of a war time plane crash in Kansas City has been stolen.

The plaque commemorated the crash of a US Air Force B-24 bomber, which in 1944 crashed in the Merriam suburb of Kansas City.

Historic Merriam is a local organisation that aims to commemorate historical sites of interest and was responsible for putting the plaque up just eight months ago.

The organisation is devastated and frustrated that the plaque has been stolen, especially since it took years for them to get authorization for the plaque to be put up.

In 1944, the B-24 was circling the area when it got so low that it caught the roof of a house. The plane spun out of control and crashed. There were three crewmen aboard the aircraft and all were killed.

Historic Merriam believes that the plaque may have been taken because the thieves might have thought it was valuable and could be melted down to be sold on. The plaque does look like it is made of bronze, but the organisation says that it isn’t, the KCTV News reports.

Local people who live on the street where the marker was placed are surprised and shocked by the theft. A lady who lives just across the road said that she had seen people taking photographs of the plaque out of interest for what happened there. But it wasn’t until one morning she noticed it had gone.

Historic Merriam says that the thieves should be ashamed of their actions. They said it had been an emotional journey for everyone involved, and was part of Merriam’s heritage but now the plaque has gone.

Local authorities have agreed to pay for the plaque to be re-made and replaced in its spot near the house where the plane crashed.