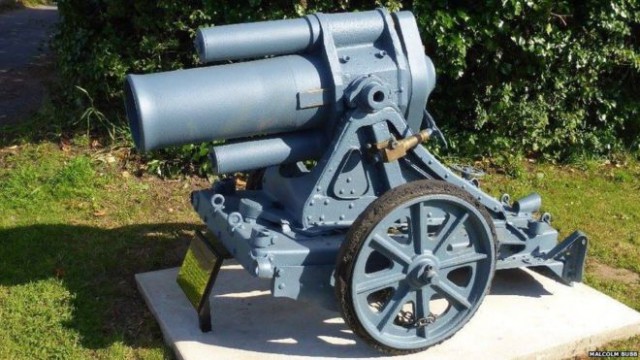 A World War One German trench mortar that was given to a village in Norfolk, England, as a trophy of the war, has returned to the village after 45 years.

The mortar was given to the village of Honing in Norfolk in 1920 a few years after World War One had ended. It was placed in prime position in the centre of the village outside the post office and stayed there for 50 years.

In 1970 the mortar was donated to the Strumpshaw Steam Museum for safe keeping and so that it could be put on display for visitors. However when the centenary commemorations of World War One were almost upon the village, the residents asked if they could have the mortar back.

The mortar is 1.2 metres in length and it now has pride of place next to Honing’s village hall.

The actual situation as to how the village was given the mortar is still unknown. The village council believes that it was either given to the village by the War Trophies Committee, or otherwise it may have come from Colonel Reginald Cubitt, who was a resident in the village and lived at Honing Hall. He fought during World War One and was the only one of his brothers to survive the war.

The War Trophies Committee was a division of the government’s War Office, which organised the distribution of war memorabilia after the war ended. The memorabilia included all sorts of military equipment including weapons, guns and artillery from not only Allied forces around the world, but also the enemy, the BBC News reports.

Many of the trophies distributed by the War Trophies Committee were later given to the Imperial War Museum and have grown its collection immensely.

According to villagers it was Colonel Cubitt who gave the mortar to the Strumpshaw Steam Museum and many residents were saddened and disappointed at the time.

Now the village has raised funds of around £250 to refurbish the mortar so that it can be sandblasted and painted.