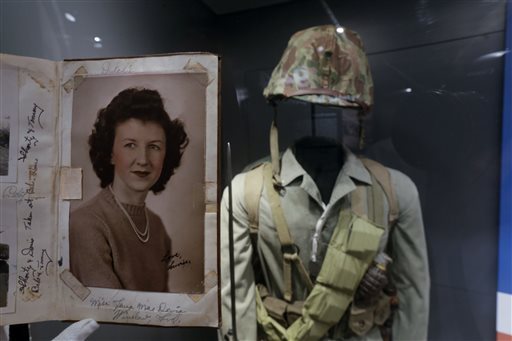 Corporal Thomas “Cotton” Jones served as a marine for the United States military during World War II. Before he was killed by a Japanese sniper in the Central Pacific, he wrote a “last request” to whoever found his diary. He wanted it to be given to Laura Mae Davis, the girl he loved.

Laura Mae Davis did in fact get to read the diary, but it took almost 70 years for her to see it. She was finally able to read her old love’s diary in a most surprising way. In 2013, while she was visiting the National World War II Museum in New Orleans she saw the diary in a display case. She was then 90 years old, and the  discovery brought tears to her eyes. There was no way to predict something like this happening after so many decades.

Her name is now Laura Mae Davis Burlingame. She married an Army Air Corps pilot in 1945. She went to the New Orleans museum to see the display that was commemorating the young marine who had been her high school sweetheart. Mrs. Burlingame expected to see pictures of him and his fellow servicemen and maybe even some articles written about them. But she was absolutely stunned to see the 22-year-old machine-gunner’s diary on display.

The curator Eric Rivet said that in 17 years of working at the museum he had never met someone who was actually mentioned in any of the articles or records on display. He happily facilitated Mrs. Burlingame wish to get a closer look. He also provided her with white gloves to protect the old pages from being damaged by the oil from her skin. The diary had been a farewell gift from her to Jones before he left for the war. The two met in 1941 at Winslow High School where he was a basketball player and she was a cheerleader. The two sweethearts dated throughout high school, but were not engaged. However, Jones did give her his class ring and took her to their prom.

The first entry was written less than a year before his death while he was a private at Camp Elliott in San Diego. In it he described the diary as a history of his days in the U.S. Marine Corps, and most of all declared his love for Laura Mae. It is clear from the diary that he was deeply in love with his girl. He closed the entry with what he dubbed as his life’s last request, which was to please return the diary to her.

Sadly, a sniper shot Jones on September 17, 1944, the third day of the U.S. assault on the Pacific island of Peleliu, in Palau. Peleliu was where the Unites States learned the hard way that Japan had changed their tactics. The battle for this island was the beginning of two and a half months of utter hell. Jones was among 1,794 Americans killed on Peleliu. A total of 7,302 Americans were injured, about 10,900 Japanese were killed, and some 19 soldiers and sailors from Japan became prisoners of war. These figures indicate the ferocity of the battle.

Burlingame was not sure why it took so long for her to get the diary. It turns out the diary originally went to one of Jones’s sisters whom she did not know very well. Jones’s nephew, Robert Hunt, who turned Jones’s artifacts over to the museum in 2001, received the diary some years after Jones was killed but did not pass it on to Burlingame because he was concerned it would cause issues with her marriage. (She said Jones and her husband had been good friends and there would have been no issue.) When Mrs. Burlingame heard that Hunt was collecting artifacts for the museum she gave him pictures and Jones’s class ring, which she had saved all those years.

In Jones’s very last entry on December 1, 1943, he mentioned winning $200 in a game of craps and how he had $320 total saved up. He thought about what a nice Christmas he could be having with his love, and contemplated how he could wire the money back home to her. He was never able to do that, but Burlingame said she was touched at how many times Jones mentioned getting letters from his parents and her. The museum scanned the diary and mailed her a copy. The 4-by-7 inch back inside cover was almost completely covered by her picture, and she had signed it “Love Laurie.”

The last wish of this gallant marine had finally been granted, even though it took almost seven decades.