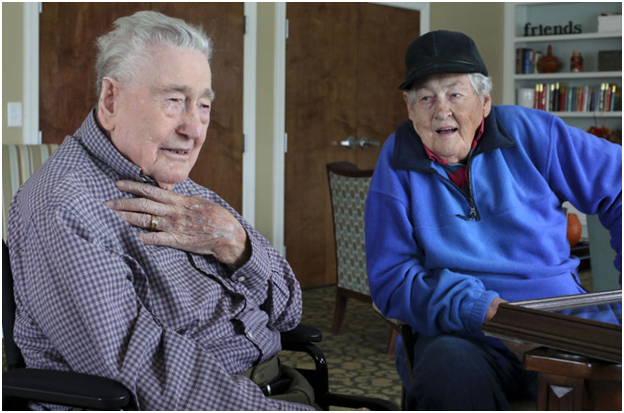 These photographs tell a tale of friendship between two old warhorses that are enjoying their pasture.  This would not have been the case 70 years ago, when George Williams, who is 95, was a bomber pilot flying B-24 Liberators for the USAF, and Gunter Buhrdorf, who is 90, was a teenager manning a 20mm anti-aircraft gun in his hometown of Bremen in Germany.

These two old soldiers were fighting on opposite sides during World War II, but now they are good friends and can share their experiences.

The two elderly gents met at the Commonwealth Assisted Living Facility in Christiansburg.  Williams was already a resident when Buhrdorf came to live at the facility, and the staff seated them at the same dinner table.  Buhrdorf once again felt a little adrift in an unfamiliar world and, true to his nature; he was hesitant to open up and talk to his fellow diners.

He maintained his silence for a few weeks until he was spending a quiet evening with some of the other residents.  Williams then started to reminisce and tell war stories about flying his bomber through the German anti-aircraft flak.  Buhrdorf was naturally more than a little nervous to tell his own story, as he was concerned that his fledgling friendships would be snuffed out if he disclosed his service in Nazi Germanies armed forces.  “I was a little bit nervous . . . maybe they don’t know this, and if I open up, then maybe they’ll change their tune,” Buhrdorf told The Washington Post, in an interview.

Buhrdorf overcame his fears and in his soft voice, still colored with a German accent; he told his story to the men around him.  He had been born in Bremen, and in 1939 at the age of 14, he joined the German army though his patriotism was for his beloved country, not the leadership in power.

These bombing raids destroyed his hometown of Bremen, and he was moved to supervise a crew of prisoners of war that were employed in building submarines for the Kriegsmarine (German navy).  He took care of the men that had been placed under his supervision, despite the fact that this would have been frowned upon by his superiors.

He ensured the prisoners were adequately cared for and fed, even though he was aware of, but could do little about, their subversive plot to intentionally build defects into the submarines in an effort to thwart Germany’s war effort.  Buhrdorf remembers how the submarines provided him and his crew of prisoners a safe haven during air raids, when they would take shelter in the torpedo tubes, often sleeping in the tubes.

Buhrdorf then joined the infantry and was posted to the Eastern Front, where he faced the might of Russia. During the retreat of the German army, Buhrdorf was injured when a piece of shrapnel gouged a path across his back, just below his shoulder.

He was eventually captured and taken to a British POW camp off the coast of England, where the conditions were appalling.  He and his clothing were lice-ridden, and the rations consisted mainly of cabbage soup.  He told his audience that he had resorted to seagull eggs, frogs legs, and dandelions to sustain himself.  He spent the rest of the war in this camp.

After the war, the situation in Germany was dire, and he made the decision to join his brothers, who were already living in America.  “I came to America after seeing all the misery, all the ruins. It was such a calamity that there was absolutely no hope of being happy, as you might say,” he said. “There was nothing.”

In 1949, he boarded a DC-6, along with a group of Norwegians, and took off to his new life with his family.  Bolstered by Canadian Club whiskey and the taunts of his fellow travelers, Buhrdorf worked up the courage to ask a pretty girl, sitting up front in the plane, to dance.  To his amazement, she agreed, and he enjoyed a waltz down the gangway of the plane, dancing to the crackling music playing over the aircraft’s speakers.

Arriving in America, he walked down the steps of the plane to see photographers clustered around the gate.  Misunderstanding why they were there, he waved merrily and was embarrassed when his brothers teased him and told him that they were not there for him, but to greet the American actress, Gloria Dehaven, who had been traveling to entertain the troops in a USO show. 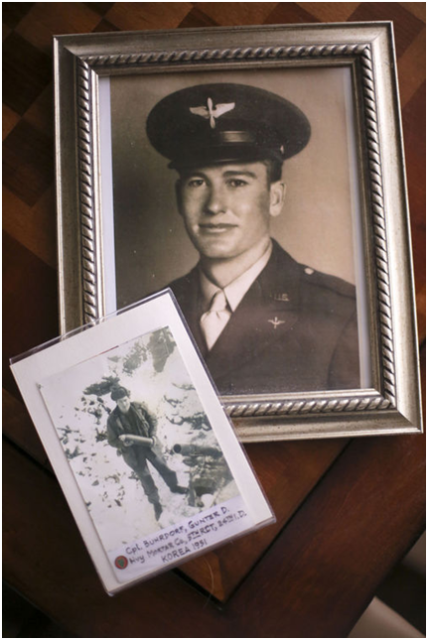 How many immigrants, let alone a man who up until a few months before had been an enemy of the soldiers she was entertaining, could boast of such an introduction to his new country?

Conditions in Germany after the war were very bad and, as a result, countless Germans decided to seek their fortunes elsewhere.  Many Germans had little idea of the atrocities Hitler had ordered, and it was only after the war that Buhrdorf discovered, to his horror, the atrocities that had been committed in his and his countrymen’s names.

The Americans welcomed the Germans, and in a strange way, they did not seem to see them as having fought on the opposite side.  The hatred for the enemy was missing; that was reserved for the Japanese because of the attack on Pearl Harbor.

The only skill that Buhrdorf could offer his adoptive country was soldiering so, on the promise of accelerated citizenship, he joined the US Army.  Less than two years later, even before his citizenship was granted, he was shipped out to fight in Korea.  What an ironical situation – here he was not yet a citizen of the United States but going to fight a war for them when he had been their enemy not so many years before.

So was it possible that these two old war horses actually squared off against each other?  It does not seem likely. Williams flew a B-24 Liberator and dropped his bombs from around 25,000 feet, while Buhrdorf manned an anti-aircraft gun that could only fire to 10,000 feet.

As Williams put it, “He couldn’t reach me. As soon as I found out how high he could reach, I knew he wasn’t the one trying to hit us. But anything we dropped could have hit him.”  While Buhrdorf was fighting on the Eastern Front, it is unlikely, but not altogether impossible, that he came under fire from Williams.

Williams and the rest of the residents listened intently to Buhrdorf’s story, and at the end Williams held out his hand, insisting that they let bygones be bygones.  Buhrdorf clasped it, sealing a friendship that exists today.  Williams pointed out that he had had the easier time during the war – he got to be a pilot and fly the airplane he loved, and things worked out well for him.

Very unusually, Williams flew his Liberator to the European theater from America with his crew of ten men.  They flew 25 missions together, and Williams then flew them safely back home.   This is a feat that Williams is inordinately proud of and takes every opportunity to relate.

Williams, who is deaf in one ear and confined to a wheelchair, and Buhrdorf enjoy an easy camaraderie.  The black and white photographs of them in their wartime uniforms hang next to each other on the Wall of Valor at the Assisted Living Center.

This peaceful acceptance of each other has impressed the staff at the Center, and Greg Crist, senior vice president public affairs at the National Center for Assisted Living, said “It’s inspiring to see that two men are able to put aside any past conflicts from their youth to bond and form a friendship that may not have occurred anywhere else.  It is unique.”

It is satisfying to see that these two elderly gents have the ability to put whatever animosity that they once had for each other aside, and enjoy the winter of their lives together.