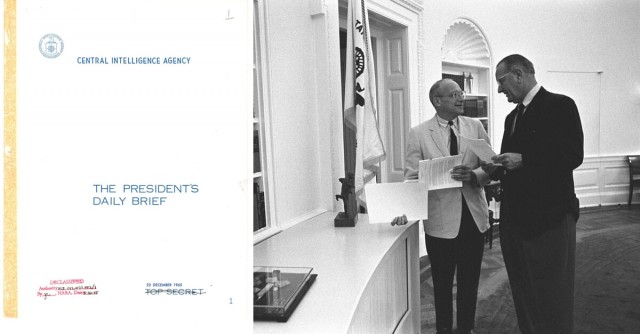 New top secret Central Intelligence Agency (CIA) records have been declassified and reveal more information about the US and Soviet relations during the Cold War.

In 1962 relations between the two countries were at an all-time low and nuclear war was a real threat. The US President at the time John F. Kennedy was passed intelligence by the CIA stating that Communist Cuba had a new nuclear warhead launcher.

These Cold War CIA briefs also reveal that a US spy behind enemy lines in Moscow reported back that the New York City ballet which was performing in Moscow at the time, received rapturous applause from the Russian audience.

All of this intelligence comes from an almost 20,000 page report provided to President Kennedy just a day before the end of the Cuban Missile Crisis.

Some of the pages were marked with ‘For the President’s Eyes Only’, and some of the documents were daily updates provided to the President by the CIA.

The President’s Daily Brief has been provided to the US President every day since the CIA was established. Today President Obama is able to get the brief on his tablet rather than in paper format.

The briefs are top secret updates of highly dangerous and difficult situations that are happening around the world. Now some of these daily briefs are being declassified and shared for the first time, starting with those from the 1960s when Presidents Kennedy and Johnson were in power.

Some of the text remains blocked out and will never be revealed to the general public, and what is shared won’t substantially change history, but it is a good insight into the daily discussions and information the President is privy to.

Political historians say that the documents are interesting since they show the events and information provided to the Presidents, which informed and shaped their decisions during a particularly tense time in international relations during the Cold War and the Vietnam War, The New York Post reports.

In 1963, President Kennedy one day received a brief that stated a Soviet anti-missile was being paraded in Moscow and in another the outcomes of the Japanese election were reported as not affecting the balance of power.

On the day Kennedy was shot, the CIA delivered a second unprecedented briefing but not of intelligence it was a poem that they knew President Kennedy liked.

When President Johnson took office it would have been the first time he had ever seen a daily CIA brief, even though he had served as vice president under Kennedy.