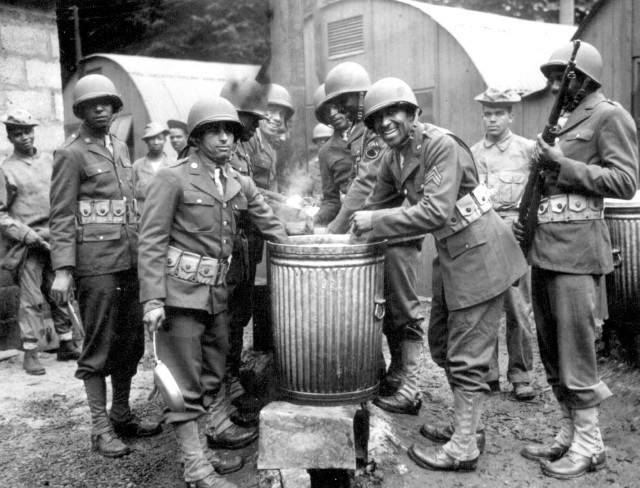 Around 100,000 African American troops were stationed in Britain during the Second World War. The treatment they received from their white comrades in arms was the same as at home in the US; they were segregated and give the labouring tasks such as helping to build barracks, and airfields.

At that time, the black population of Britain numbered less than 10,000 out of a total of 46.5 million. Many British people had never seen a black person, let alone an American. The US troops knew little or nothing about British culture, so they were issued with a handbook.

It told them that the British had a natural reserve, were polite and resilient and were not unfriendly. The British were told (by the Chief of the US Navy) that they should take American troops as they find them, and should not overreact if they were ‘a little bit skittish at first’.

The differences were considerable, and, at first, a lot of British people became concerned that American ways would undermine their culture. Many women, however, liked the straight-speaking, fun-loving GIs and their music, and the fact that the troops always seemed to have money in their pockets – a good deal of which was spent on giving the girls a good time. By 1949, as many as 100,000 British women had married GIs and left their homeland for a new life in America.

The black US troops tended to see a different side to their fellow white GIs, however, an aspect of wartime Britain that is explored in a new book by Linda Hervieux, called ‘Forgotten: The Untold Story of D-Day’s Black Heroes, at Home and at War’.

British people quickly realised that black Americans were being treated as second-class soldiers by their white counterparts. Segregated on the military bases, the black men were repeatedly subjected to racist abuse and violent behaviour in the British pubs, dance-halls and cinemas by white GIs and Military police, and the British public began to resent it.

Their sense of outrage came to a head on June 24, 1943, when a group of white American MPs started abusing black GIs outside a Leicestershire village pub.  Large numbers of British drinkers took sides with the GIs, and a riot ensued. Seven American servicemen were badly injured, and over 30 black GIs were subsequently court-martialled.

The Leicestershire riot acted a catalyst, and during the following eight months there were 56 reported violent incidents involving white and black American troops.