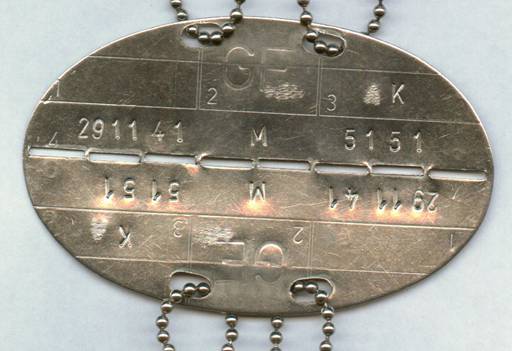 “Dog tags” is the informal term for the identification tags worn by military personnel, because of their resemblance to actual dog tags. The tags are primarily used for the identification of dead and wounded soldiers, and to convey essential basic medical information, such as blood type and history of inoculations, along with religious preference. Dog tags (called “identity discs” in the UK) are usually fabricated from a corrosion-resistant metal although they have been made from whatever was available.

They may contain two copies of the information and be designed to break easily into two pieces; some nations use two identical tags. This allows half the tag (or one of two tags) to be collected from a soldier’s body for notification, while the other half (or other tag) remains with the corpse when battle conditions prevent the body from being immediately recovered.

Dog tags were provided to Chinese soldiers as early as the mid-19th century. During the Taiping revolt (1851–66), both the Imperialists (i.e., the Chinese Imperial Army regular servicemen) and those Taiping rebels wearing a uniform wore a wooden dog tag at the belt, bearing the soldier’s name, age, birthplace, unit, and date of enlistment.

President Thomas Jefferson wrote the first dog licensing law for his home state of Virginia, because his sheep were being killed by dogs. He wanted to identify the dog’s owners and make them pay for the sheep they killed. By the 1850’s most localities had dog licensing laws that required dogs to wear a collar with the owner’s name and license number. Eventually small wooden or metal discs were used and referred to as “dog tags” and that name carried over to their human counterparts.

During the American Civil War from 1861–1865, some soldiers pinned paper notes with their name and home address to the backs of their coats. Other soldiers stenciled identification on their knapsacks or scratched it in the soft lead backing of their army belt buckle.

Manufacturers of identification badges recognized a market and began advertising in periodicals. Their pins were usually shaped to suggest a branch of service, and engraved with the soldier’s name and unit. Machine-stamped tags were also made of brass or lead with a hole and usually had (on one side) an eagle or shield, and such phrases as “War for the Union” or “Liberty, Union, and Equality”. The other side had the soldier’s name and unit, and sometimes a list of battles in which he had participated. 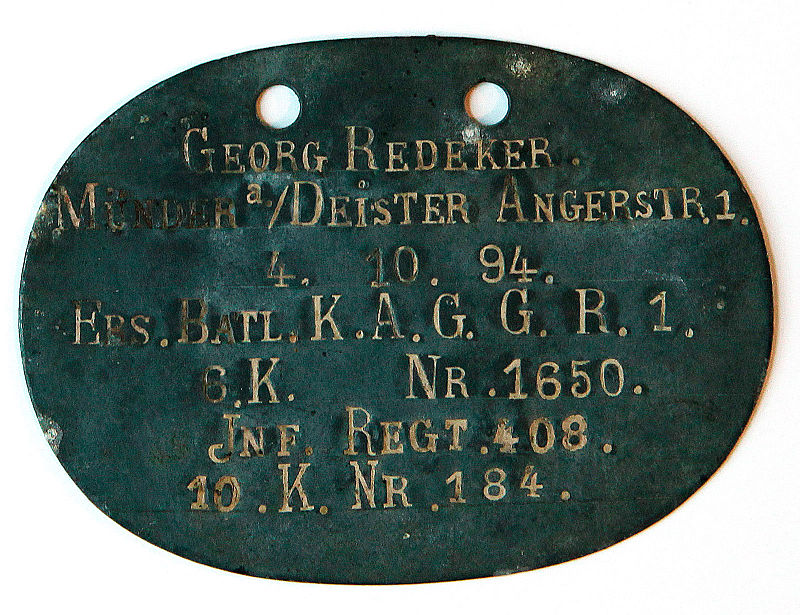 A WWI German army dog tag indicating Name, place of birth, battalion, unit and serial number
The British Army introduced identity discs in place of identity cards in 1907, in the form of aluminium discs, typically made at Regimental depots using machines similar to those common at fun fairs, the details being pressed into the thin metal one letter at a time. British Regimental Identity Disk circa 1907

By 1915 the British Army required all soldiers to wear two official tags, both made of compressed fibre (which were more comfortable to wear in hot climates) carrying identical details, again impressed one character at a time.

The tags, one an octagonal green tag punched with two holes for cords, the other a red circular tag punched once, were suspended from the serviceman’s neck using cord resembling butcher’s twine, being passed through one hole in the octagonal green tag, a much shorter cord used to link the two tags, which could be easily separated by cutting. British Identity Discs 1914-18 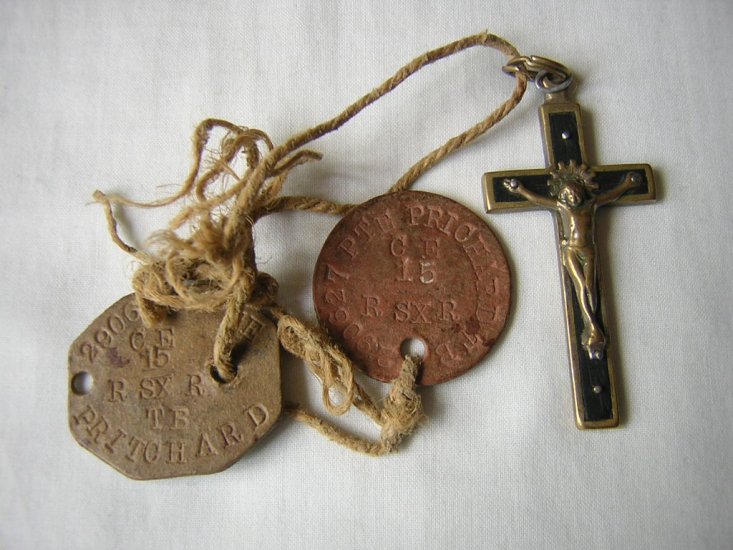 WW1 dog tags to a Pte Pritchard 290627 of the Royal Sussex regiment with the cross of Jesus in good used condition.The cross is brass with good detail and the dog tags show all the details of the user

On discovering a body with both tags the second could be taken to record the death, others subsequently finding the same body knowing the death either had been (or would soon be) reported, the details on the green tag remaining with the body for the benefit of burial parties who whenever possible would prepare markers.

An aluminum identification tag, the size of a silver half dollar and of suitable thickness, stamped with the name, rank, company, regiment, or corps of the wearer, will be worn by each officer and enlisted man of the Army whenever the field kit is worn, the tag to be suspended from the neck, underneath the clothing, by a cord or thong passed through a small hole in the tab. It is prescribed as a part of the uniform and when not worn as directed herein will be habitually kept in the possession of the owner. The tag will be issued by the Quartermaster’s Department gratuitously to enlisted men and at cost price to officers.

The army changed regulations on July 6, 1916, so that all soldiers were issued two tags: one to stay with the body and the other to go to the person in charge of the burial for record-keeping purposes. In 1918, the army adopted and allotted the serial number system, and name and serial numbers were ordered stamped on the identification tags. (Serial number 1 was assigned to enlisted man Arthur B. Crane of Chicago in the course of his fifth enlistment period.) 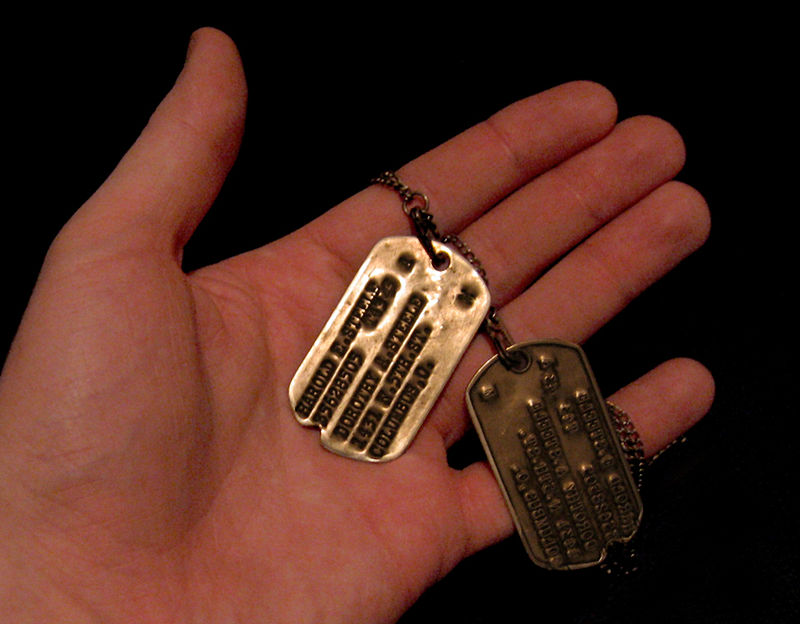 Dog tags of a U.S. Army soldier who served in World War II

There is a recurring myth about the notch situated in one end of the dog tags issued to United States Army personnel during World War II, and up until the Vietnam War era. It was rumored that the notch’s purpose was that, if a soldier found one of his comrades on the battlefield, he could take one tag to the commanding officer and stick the other between the teeth of the soldier to ensure that the tag would remain with the body and be identified.

In reality, the notch was used with the Model 70 Addressograph Hand Identification Imprinting Machine (a pistol-type imprinter used primarily by the Medical Department during World War II). American dogtags of the 1930s through 1970s were produced using the Graphotype system, in which characters are debossed into metal plates. Some tags are still debossed, using earlier equipment, and some are embossed (with raised letters) on computer-controlled equipment.

In the Graphotype process, commonly used commercially from the early 1900s through the 1980s, a debossing machine was used to stamp characters into metal plates; the plates could then be used to repetitively stamp such things as addresses onto paper in the same way that a typewriter functions, except that a single stroke of the printer could produce a block of text rather than requiring each character to be printed individually. The debossing process creates durable, easily legible metal plates, well-suited for military identification tags, leading to adoption of the system by the American military. It was also realized that debossed tags can function the same way the original Graphotype plates do.

The Model 70 took advantage of this fact, and was intended to rapidly print all of the information from a soldier’s dogtag directly onto medical and personnel forms, with a single squeeze of the trigger. However, this requires that the tag being inserted with the proper orientation (stamped characters facing down), and it was believed that battlefield stress could lead to errors. To force proper orientation of the tags, the tags are produced with a notch, and there is a locator tab inside the Model 70 which prevents the printer from operating if the tag is inserted with the notch in the wrong place (as it is if the tag is upside down).

This feature was not as useful in the field as had been hoped, however, due to adverse conditions such as weather, dirt and dust, water, etc. In addition, the Model 70 resembled a pistol, thus attracting the attention of snipers (who might assume that a man carrying a pistol was an officer).[citation needed] As a result, use of the Model 70 hand imprinter by field medics was rapidly abandoned (as were most of the Model 70s themselves), and eventually the specification that tags include the locator notch was removed from production orders. Existing stocks of tags were used until depleted, and in the 1960s it was not uncommon for a soldier to be issued one tag with the notch and one tag without. Notched tags are still in production, to satisfy the needs of hobbyists, film production, etc., while the Model 70 imprinter has become a rare collector’s item.

It appears instructions that would confirm the notch’s mythical use were issued at least unofficially by the Graves Registration Service during the Vietnam War to Army troops headed overseas.

Dog tags are traditionally part of the makeshift battlefield memorials soldiers created for their fallen comrades. The casualty’s rifle with bayonet affixed is stood vertically atop the empty boots, with the helmet over the rifle’s stock. The dog tags hang from the rifle’s handle or trigger guard.

Contrary to popular belief, the “notch” in the WWII dog tag was not designed so the dog tag could be placed in the teeth of a deceased soldier for identification.

Illustration from the Instructions for the Addressograph Model 70