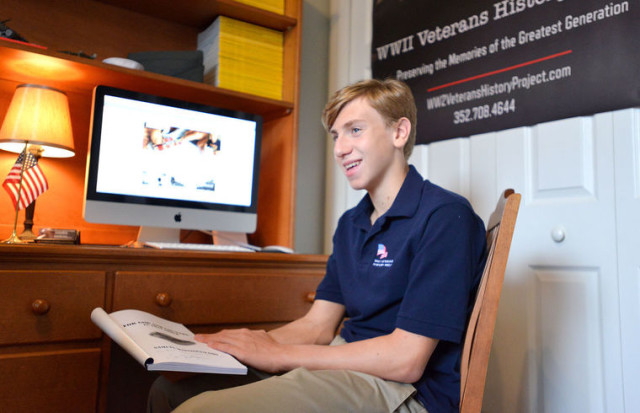 A teenage school student is interviewing World War Two veterans and plans to air the interviews on his local television channel, LakeSumter TV.

Benjamin Mack-Jackson is 13 years old and studies at Lake County Virtual School in California. He says that he understands how much the soldiers of World War Two sacrificed for the freedom of today’s generation and wants to honor their experiences and memory.

Benjamin is a World War Two enthusiast, and his bedroom is covered in memorabilia from the war. His obsession with the war began when he was tasked to do a history project based on World War Two for his history class.

So far, Benjamin has interviewed around 17 veterans, including David Lofgren, who was able to tell him about fighting on the frontline at the Battle of the Bulge and liberating Jews from a Nazi concentration camp.

Benjamin says that he has learnt so much from meeting the veterans and learning about their experience all those years ago. He says that they are all able to remember so many details, even though the war ended 70 years ago.

Most of the veterans are now in their 90s, with the oldest one interviewed being Alvin Hersey, who is 99 years old. He fought in the Battle of the Bulge and was taken as a prisoner of war by the Germans.

Benjamin had found that there were only two pages of his school textbook dedicated to World War Two, and he was very frustrated and wanted to find out more. His mother, Tracy, says that he went to the library and took out every book he could find about the war and also started watching as many documentaries as he could.

Benjamin believes that his interviews are an interactive way to study, and he can get real first-hand information from the men who actually fought on the frontline.

Benjamin works from home and is a virtual student, so while he learns the same curriculum as his fellow high school students of the same age, he is also able to dedicate more time to his special history project.

Tracy and her husband have driven Benjamin all over America to interview the veterans, including to Ocala, The Villages, and Daytona Beach. Even so, they are pleased Benjamin has found such a passion for the war.

Both Benjamin’s great-grandfathers served in World War Two. They have both since died, and Ben says he would have loved to have interviewed them too.