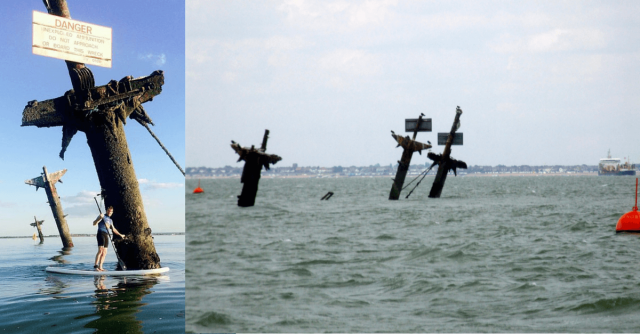 A local Kent man has been criticised for posing in the middle of the Thames estuary next to a World War Two ship wreck that has almost 1500 tonnes of unexploded ordnance still aboard.

The ship wreck is well-known to the locals of the surrounding area and its rusted wreckage can be seen sticking out of the muddy Thames estuary water. The wreck is located just off the coast of Sheerness in Kent.

The Kent man, Shane Skinner is a paddle-boarder who paddled out to the wreck to explore and had friends take pictures of him next to the wreck. He subsequently posted the images online and has since been inundated with criticism since he put the lives of his friends and the local people at risk.

The wreck is that of the SS Richard Montgomery which is surrounded with buoys andwarn of the danger on the wreck.

The British Maritime and Coastguard Agency is now undertaking an investigation into the incident and hopes to bring charges against Shane so as to deter future prospective ‘visitors’ to the wreck.

Shane admits that he and his friends visited the wreck site for a laugh and that it was harmless fun. But over 20,000 people viewed his image that was posted online and have criticised his actions.

Many believe that if the unexploded bombs are detonated it could wipe out the nearby Isle of Sheppey. Locals view Shane’s actions as irresponsible and suggest that the wreck has become an attraction for young vandals who are able to get out to the site. People have been spotted swimming, paddle-boarding and kayaking out to the wreck.

The wreck is located about two miles off the coast line and visitors have to get across a major shipping route that heads straight into central London. However, regardless of these dangers and the warning signs, people are still making the trip and getting up close to the remains of the ship.

The SS Richard Montgomery was an American ship built during World War Two. It was transporting supplies and equipment as part of a larger convoy from the US heading to the UK. It was recorded as carrying about 7000 tonnes of bombs and weaponry, the Mail Online reports.

It had anchored off Sheerness in the Thames Estuary whilst awaiting instructions of where to off-load her cargo, when she became sand-banked on the shallow estuary bed. Her cargo began to be offloaded where she had moored, but the ship’s hull cracked and the remaining cargo was left on board to sink with her.