His family thought he was dead. He was reportedly killed in combat on August 13, 1944 when the U.S. Forces failed in their mission to surround that German forces at the Falaise Gap in France. After 70 years, the fate of U.S. Army Pfc. Lawrence Samuel Gordon was finally revealed.

The casualties of that encounter were accounted for. The 43 remains of the reconnaissance division were identified and returned to their families. They were also buried overseas. However, Gordon’s whereabouts remained a mystery for seven decades.

Forensic DNA experts were tasked to identify the remains of a soldier mistakenly buried as an unknown Nazi in a German cemetery in France. The results have been released and they have positively identified the remains to belong to Gordon. The report, however, was not released by the Joint POW/MIA Accounting Command or JPAC. The agency was tasked in finding and identifying the remains of 83,000 recorded American casualties from the Second World War. The agency received criticisms because of identifying only 80 soldiers since its creation despite its budget of $100 million in 2012. The identification of Gordon was the result of the efforts of volunteers, researchers, forensic scientists who worked only with a budget of $25,000 for the process.

One of the researchers of Gordon’s mysterious whereabouts was Jed Henry, a profession filmmaker. His grandfather served with Gordon under the same unit. Henry was very vocal about his disappointment at working with the authorities of the United States. He said that during the process of searching for and identifying Gordon, they had to work with four countries of different political beliefs, language and system of bureaucracy. Yet through it all the four-man team and the Gordon family were able to convince Canada, France, Germany and the United States to see to it that Gordon received the proper identification and burial that he deserved.

Lawrence Gordon, nephew of the deceased soldier, also had the same sentiments with Henry. He recalled the lack of assistance from the JPAC community despite his persistent inquiries. He was unsatisfied with the lack of support so he decided to work on his own. He worked with a family friend Henry who served as researcher. The nephew said that they had faced many difficulties during the process. 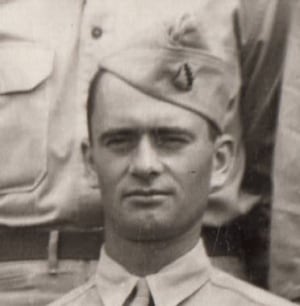 Henry further claimed how Gordon became frustrated with the process. They had done their own private research and submitted their findings yet there still was no positive action from JPAC. They wanted to bring the remains of their uncle back. But their request remained in paperwork.

Gordon and Henry turned to the governments of Germany and France to work on their request. The two countries are responsible for the Mont-de-Huisnes German War Cemetery where they believed that PFC Gordon was buried due to mistaken identity. The request was to exhume the remains in crypt 40, burial chamber 57, coffin number 8209. Both countries agreed. France even tasked the l’Institut National de Police Scientifique (INPS), the national crime lab, to do the DNA tests on the remains. They offered the services at no charge.

In February this year, the INPS report revealed that there was a match of DNA of the remains of the unknown soldier and that of Lawrence S. Gordon.

JPAC remained stubborn to accept the results from the French lab. Gordon and Henry again had the DNA testing at two independent labs in the United States. The labs include Bode Technology Group and the DNA Sequencing Facility of the University of Wisconsin. The former used nuclear DNA from the lab in France for testing.

The vice president of international development, Ed Huffine, announced that they have positively identified the remains to belong to that of Pfc. Gordon. He said that the DNA results are very helpful in the identification of missing servicemen. The DNA testing and successful identification of Pfc. Gordon was the first. But it could be used in a large-scale to other service members.

JPAC usually uses mitochondrial DNA for testing. It is rare but not really unique like nuclear DNA so it is preferential. Before, the agencies only used anthropology-based research for identification. Now, DNA can be used as basis for identifying the servicemen.

The results immediately spelled change. Only this year, Defense Secretary Chuck said that changes are to be made to the JPAC. Servicemen identifications are transferred to the armed forces medical examiner who will focus on using DNA tests.

Secretary Hagel also announced that the agency will do its best to work with families like that of Gordon’s. He also said that they are trying to develop ways to further the public-private partnerships in the identification of the missing. The want to give the non-government organizations the shared responsibility of searching and identifying the missing.

Although the change is a little late for Pfc. Gordon, his nephew and Henry hoped that other families with missing relatives will benefit from the new programs.

Henry further explained the benefit of public-private partnership. The UW and the Bode has greatly reached out to extend help to the family in identifying Pfc. Gordon. If the United States will pursue a testing program, Henry thinks that the government should see an example in the INPS, a French government agency, the UW and the Bode.

JPAC has only recently taken an interest in the case of Pfc. Gordon. The agency has sent representatives to the University of Wisconsin to examine the results of the DNA testing.

Pfc. Gordon will remain in France where a ceremony will be held in his honor. The Gordon family and Henry will see to the ceremony at the end of May. After, the remains will be transported home to the United States via a commercial airlines. Gordon is to be buried near his family in Canada. August 13 will be the 70th anniversary of his death.