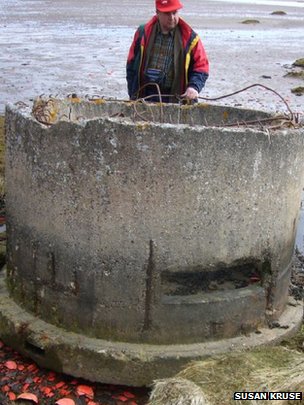 A rare World War II pillbox that could “disappear” was discovered at what once was a former military airfield in the Highlands.

The Pickett-Hamilton fort was designed as a cylindrical pillbox which could “disappear” because it could be raised and lowered from the ground. It was intended to surprise assaulting enemy paratroopers and launch counter attacks. The fort could be lowered to the ground so that it would not affect the aircraft landing and taking off of the runways of the airfield. When raised, the fort would reveal defending soldiers and weaponry.

The BBC News reports that the pillbox once fortified the defenses at Evanton in Ross-shire. After the war, however, it was seen as irrelevant and dumped on the nearby shoreline where it was recently discovered.

The fort found at Evanton was a recent discovery. It has never been recorded by modern-day archaeologists and historians. The known World War II relic is now documented by the Evanton Wartime Remains Project. The project covers over 160 military sites at the Highland airfield as well as the surrounding areas known to have been used during war. The project has been, for years, gathering information from different sources including local people, military maps, archives, aerial photos and other research documents to record the sites, relics and structures which have survived the war.

The project involves the Archaeology for Communities in the Highlands, Inverness Young Archeaologists Club, Kiltearn Primary and Dingwall Academy.

The Pickett-Hamilton pillbox discovered by the project team is described as “rare”.

“Unexpected finds include three unrecorded pillboxes, including a Pickett-Hamilton fort which could be raised and lowered, and a Norcon pillbox, said by one commentator to be possibly the most dangerous, cheap and nasty of all the pillbox designs,” according to a project spokesperson.  The pillbox survived the war still durably structured. The Pickett-Hamilton found at Evanton still has an entrance hatch, hand holds and pipes inside. Aside from the sample found at Hamilton, the Tangmere Military Aviation Museum, located near Chichester in West Sussex, also has one of the Pickett-Hamilton in its complete structure. The said fort was recovered in 1984 at RAF satellite airfield Merston.

According to the museum, the forts in prototypes were constructed in the workshops of racing driver Donald Campbell. He is a friend of the inventor of the fort, Norman Pickett. He died on Coniston Water in 1967 in an accident trying on a water speed record bid.  Campbell was also said to have been at Andover airfield in 1940 observing the trials of the pillboxes.