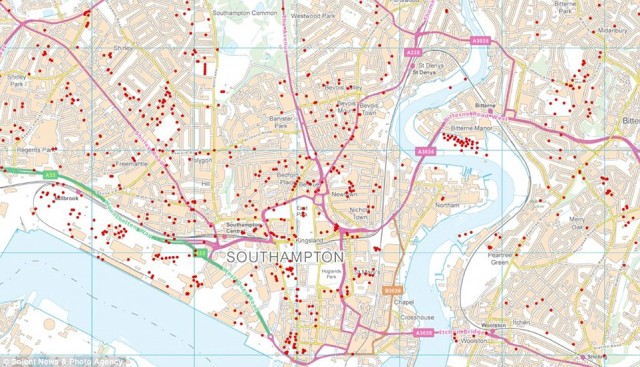 A new Ordnance Survey bombing map produced in the UK has been released showing the exact locations of all the bombs dropped by the German Luftwaffe on November 30 and December 1, 1940 during the Blitz over Southampton in the UK.

Southampton is a southern coastal city in the UK that was a key target for the Nazis during World War Two since it had a large military manufacturing base and was a vital port for the Allies.

Small pinpoints on the map show the huge impact of the bombing since around 700 German bombs were dropped on the city in just two nights in 1940.

The city was left devastated with hundreds of buildings flatten. In total throughout the entire war, Southampton had around 30,000 incendiary devices and around 2,300 bombs dropped on it.

The map has been produced as a graphic and marks 75 years since the Blitz took place. It shows that most of the bombs were targeted at the Northam Bridge area of the city, which was the location of a Spitfire aircraft factory.

The map has taken around three months to produce, whereby the Ordnance Survey office worked with The National Archives and Southampton City Council to research official records from the war and pinpointed each and every bomb.

The Blitz is often associated just with the city of London, but many other towns and cities across the UK were targeted including Coventry, Bristol and Southampton.

Over 25 clusters of bombs can be seen all in the Northam Bridge area, whilst other areas of the city were completely unaffected. This is also a telling sign of the accuracy of the German bombers.

In a two-night Blitz November 30 and December 1, 1940  around 137 people died and more than 1100 homes were destroyed. Some of Southampton’s oldest and most historic buildings were also destroyed.

Other target areas included industrial areas in Woolston, Itchen, and the city centre. At the time the attack and its results were unequalled across the UK – it was the worst air attack so far.

During the war, there were at least 57 bombing raids and 1,500 alerts in the city.

One of the researchers on the project commented that today it is hard for any of us to comprehend the devastation and destruction across the city. The map is hoped to ensure that people can relate to the scale of the bombings and the impact on the towns’ people.