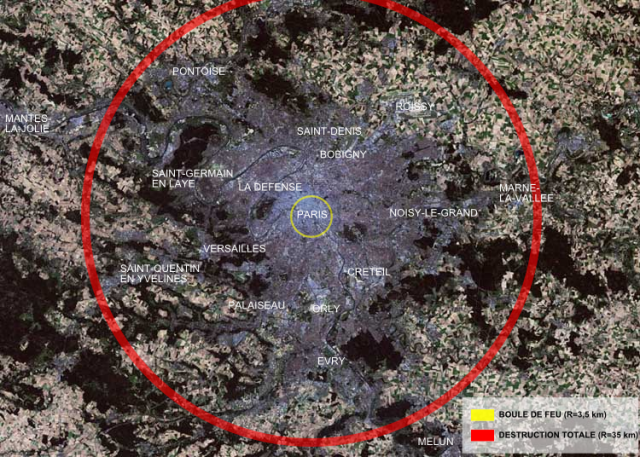 If used on Paris, the city would be wiped out [Via]

Russia is to reveal a monument to its biggest nuclear weapons achievement in the form of a replica of the ‘Tsar Bomba’.

The ‘Tsar Bomba’ was a huge AN-602 hydrogen bomb that the Russians detonated over the Arctic in 1961 during the days of the Cold War.

The bomb was exploded as part of the Soviet Union’s nuclear weapons testing and it created a huge giant mushroom cloud like that over Hiroshima and Nagasaki in Japan but vastly bigger.

The replica monument is to be positioned near the Kremlin in Moscow and is to be opened in September. It is being built as part of a wider exhibition to showcase Russia’s nuclear developments since the end of World War Two.

The bomb was 58 mega-tonnes and was approximately 3000 times more powerful than the atomic bombs the US dropped on Japan in 1945.

The specially-designed, Tupolev Tu-95B bomber, was made to specifically carry the bomb of 26.5 tonnes. It was dropped about 6.5 miles above the Arctic region of Novaya Zemlya.

At the time of the test, Soviet media reported that the bomb’s shockwaves circled the earth three times, with an explosion spanning almost 5kms and the cloud reaching up to 67kms.

When the bomb was released the Tupolev descended around one km because of the impact from the explosion. Even though she had been known as the ‘Tsar Bomba’ she also had a nick name of ‘Kuzma’s Mother’ which means that ‘we’ll teach you a lesson’ and is thought to have been created by the former Soviet leader Nikita Khrushchev.

The replica will feature specially made bomb casings that have been made in a government nuclear research centre in Sarov, the BBC News reports.

The exhibition will be open throughout September and is celebrating 70 years of Russia’s nuclear developments. Other nuclear related items on display will include personal belongings of Soviet scientists, top secret Soviet documents and models of nuclear equipment.