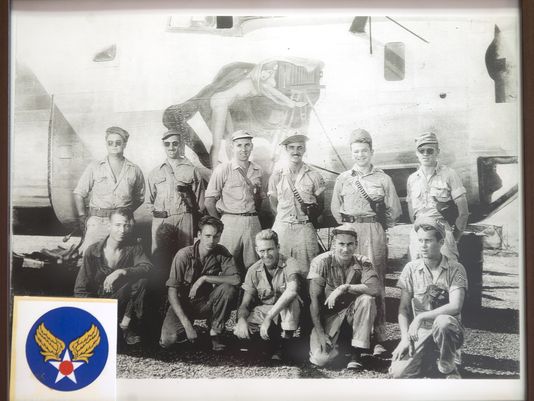 The mystery of a B-24 bomber that was lost during a reconnaissance mission in the Pacific is on the verge of being solved with the combined efforts of a Doctor and a lawyer. Dr. James Bertel and Paul Julian got connected while separately investigating the mystery surrounding the disappearance of ‘The Photo Queen’ bomber nearly 71 years ago. Both Bertel and Julian had an uncle within the crew of the bomber and this family connection along with a shared interest in knowing the fact about the lost bomber brought them closer to work in collaboration.

In July this year, Bertel made the journey to the dense, crocodile infested and full of dangerous insects jungles of New Guinea. A local guide and a whole bag full of gear including antibiotics and water filter accompanied Bertel. He managed to make his way to a grave marked by two coconut trees. Locals had previously told Bertel that during the war some Americans were seen fighting Japanese and got killed. Later on locals buried them in the jungle and marked their graves with two coconut trees. After digging the ground Bertel unearthed at least four bodies of the American soldiers. He hopes to make another trip back to New Guinea next summer with a government funded excavation project for the missing B-24 plane and its 11 crewmembers.

The Photo Queen was on a routine reconnaissance mission over the Pacific when it lost connection and disappeared. The official Military reports suggested that the plane had crashed in the Pacific and that no crewmember survived. But Bertel and Julian’s research found out that this military account is fabricated and is not based on the facts. After the war a number of investigations by Australian and Dutch historians brought the fact to light that the plane was actually forced to land on enemy territory and was never crashed in the sea. The bomber was in fact caught in a powerful typhoon and was swept off course and after a number of failed attempts to connect to the control on ground; it had to land inside enemy territory. The surviving members of the plane were captured and later executed by the Japanese Army, the Courier Post reports.

Dr. Bertel and Julian brought their research to the public eye hoping that government and the US Army will help them unravel the mystery of the photo queen hence rectifying a grave error made during the WWII. Bertel stresses that the families and relatives of those killed in the war deserve to know the last moments of their loved ones.