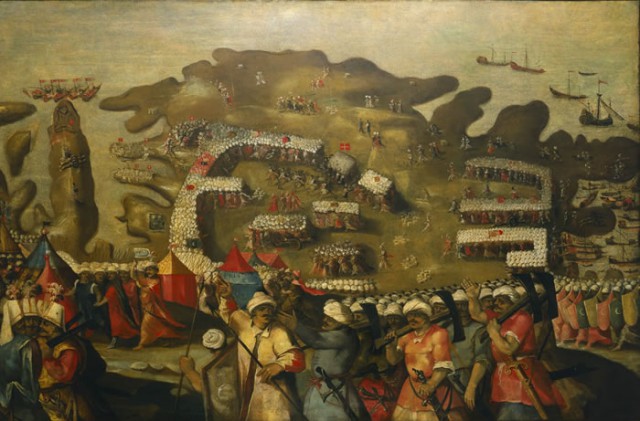 The garrison of St Elmo consisted a hundred knights and some seven hundred soldiers.  Amongst the latter were four hundred Italian mercenaries. Into the ranks of these defenders poured a Turkish bombardment of immense proportions.  Soon, the defenders ranks began to be thinned by the unending artillery barrage, and the fort began to weaken and crumble.  As soon as the artillery ceased firing, the Turks launched wave after wave of soldiers against the Knights of Saint John.  Incredibly, the defenders were able to recover from the mind numbing effects of the artillery barrages and hurl the Ottoman troops from the walls of Saint Elmo.  With a mounting toll of dead and wounded, Valette sent over boatloads of men and supplies from the forts surrounding Grand Harbour.  This constant injection of soldiers and material kept St Elmo alive and allowed it to endure day after day of endless artillery barrages and assaults.  Despite their overwhelming advantage in numbers and weapons, the Ottomans were unable to take the tiny fort.  And then, to the dismay of the defenders, the great corsair Dragut arrived at Malta and added the weight of his military genius to the Ottoman campaign.  Dragut possessed a formidable reputation that allowed him to act without restraint and was often deferred to by Mustapha Pasha and Admiral Piali.  Dragut’s arrival, therefore, added a new dimension to the St Elmo siege.

Under his fierce and professional eye, the Turks concentrated their firepower and began to tear large gaps into the sandstone walls of St Elmo.  When the barrages stopped, waves of Algerians, Iayalrs, Spahis and Dervishes were hurled at the walls.  Yet still the iron clad warriors of Malta stood unrelenting against the assaults of the Turk. Muskets, pikes and swords as well as primitive flamethrowers called trumps and burning hoops that were tossed among the advancing ranks held off the massed assaults of Dragut.

So high was the morale of the defenders, that on one occasion the small garrison of St Emo actually took the offensive against the 40 000 strong Muslim army.  The defenders stealthily left the refuge of the fort and then suddenly burst upon the Ottoman camp.  Panic set in amongst the Turks but Mustapha Pasha summoned his elite corps, the Janissaries, and flung them against the advancing knights.  The Janissaries, iron soldiers who combined discipline, bravery and fanaticism, not only halted the attack but sent the knights reeling back into the safety of Fort St Elmo.  The Janissaries also secured an important ravelin that the Knights had held and from here they were able to pour musket fire into Fort St Elmo virtually unopposed.

Despite this unfavourable turn of events, the Knights and their auxiliaries were grimly determined to hold onto possession of Fort St Elmo.  The longer the fort held out, the greater the delay to the overall conquest of the island itself.  It was imperative that the Turks capture Fort St Elmo and secure their armada in Grand Harbour.  The galleys of Sultan Suleiman could not be left off the coastline indefinitely – the onset of a severe storm could wreck not only the armada of Admiral Piali, but the entire invasion plan as well.  There would be no further Muslim advance across the island until the safe waters of Grand Harbour had been secured for the Sultan’s fleet, and Fort St Elmo was the only obstacle to this.  Knowing this, the Knights of Saint John were grimly determined to hold onto their fort for as long as possible

This is a multi part series: