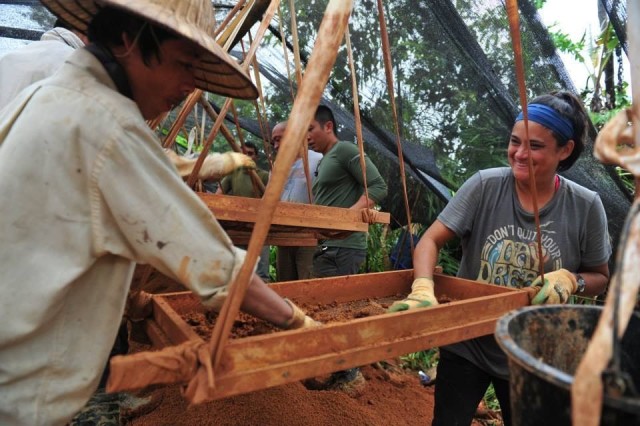 Technical Sergeant Robin Bailon, didn’t think she’d end up where she did. She originally enlisted in the Air Force to help serve her country, but she could not have guessed at the outset what that service would ultimately look like. Sergeant Bailon was able to serve his country in a unique way.

In fact, most people are probably unaware that her role or department even exists. Not that it’s classified – it’s just a little-known project within the U.S. military.

She started out as a flight equipment specialist, but she was soon offered a chance to change jobs and head to Vietnam to search for the remains of American casualties and lost aircraft with the Prisoner of War Accounting Agency, which also searches for soldiers reported MIA, or “missing in action.”

With its offices in Washington D.C., as well as a base in Hawaii, this department has a very specific job: no man left behind. They ensure that the remains of dead American soldiers, as well as American POWs and MIAs, are returned home, or at the very least accounted for.

Bailon jumped at the chance when she heard that the Air Mobility Command had an opening  for a new team member. She had heard from others who had served on the team that the work was interesting, and that it would allow her to use her skills and training in a completely new way.

Her area of expertise is called “life sciences,” and last year she was able to find, isolate, and clear the area around an old crash site that the agency discovered years ago, but was only now able to fully investigate. She had the opportunity to work with experts in a number of different fields, including an explosives expert and a Vietnamese translator, to find the remnants of old American military hardware.

Her area of expertize meant that she was the only member of the team who could positively identify the pieces once they were recovered. She was instrumental to the recovery effort. As Army Captain Jonathan Duncan of the 121st Joint Field Activity recovery team reported, she was absolutely essential to the team. They could not have fulfilled their mission without her familiarity with American military equipment.

Vietnam contains large areas of extremely  difficult terrain, the kind that gave both the French and the U.S. militaries such problems in navigating the land as they tried to occupy the country. Bailon’s team encountered many of the same difficulties, facing mountains, freezing cold, rain, and a host of other  difficulties, which multiplied significantly the difficulty of an already monumental task. The team was committed to their work and they battled on through the difficult terrain.

Bailon reported, however, that her task was completed just after Veteran’s Day, and she said that there could not be a more appropriate time to be doing what she was doing.