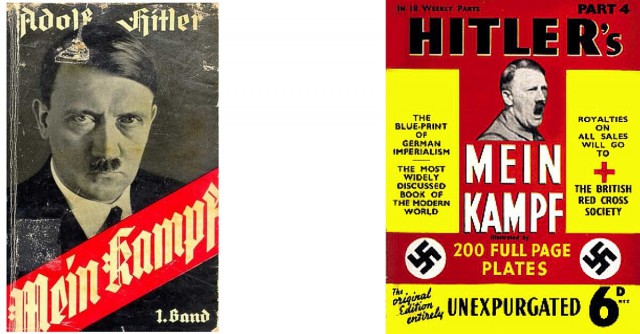 New copies of Hitler’s 1930s manifesto, Mein Kampf, are to go on sale in Germany for the first time since being banned 70 years ago.

The Institute of Contemporary History (IFZ), in Munich, will publish Mein Kampf in two volumes and offer it for sale for €59 in January of 2016, when its copyright expires and the material will belong in the public domain. The new version has been six years in development; it is expected that up to 4000 copies will be printed. It is the first time the book will be published since World War Two ended in 1945.

Hitler wrote ‘Mein Kampf’ in 1924 when he was imprisoned for leading a coup on the Weimar government. There are only a few original copies of Hitler’s manifesto still in existence; of these only two signed copies remain. After the war Bavaria, a region in the south of Germany, was given the rights to the book; they never allowed it to be republished.

Hitler began dictating the book to Hess while imprisoned for what he considered to be “political crimes” following his failed Putsch in Munich in November 1923. Although Hitler received many visitors initially, he soon devoted himself entirely to the book. As he continued, Hitler realized that it would have to be a two-volume work, with the first volume scheduled for release in early 1925. The governor of Landsberg noted at the time that “he [Hitler] hopes the book will run into many editions, thus enabling him to fulfill his financial obligations and to defray the expenses incurred at the time of his trial.”

After Hitler rose to power, the book gained a large amount of popularity. The book was in high demand in libraries and often reviewed and quoted in other publications. Hitler had made about 1.2 million Reichsmarks from the income of his book in 1933. During Hitler’s years in power, the book was given free to every newlywed couple and every soldier fighting at the front. By 1939, the book had sold 5.2 million copies in 11 languages. By the end of the war, about 10 million copies of the book had been sold or distributed in Germany.

At the time of his suicide, Hitler’s official place of residence was in Munich, which led to his entire estate, including all rights to Mein Kampf, changing to the ownership of the state of Bavaria. As per German copyright law, the entire text is scheduled to enter the public domain on 1 January 2016, 70 years after the author’s death

Jewish opponents of the book say that it is dangerous to have it reprinted, but the publishers say it shouldn’t gain a renewed popularity for fascist thinking.  The director of the IFZ claims there is no attraction, to Hitler’s commentary – its approximately 3500 annotations or explanations from experts will serve to explain Hitler’s words and put them into context.