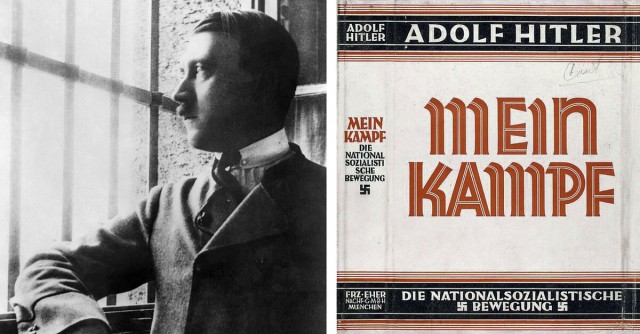 Since the 70 year long copyright on Hitler’s manifesto, ‘Mein Kampf’ expired, demand for the newest first edition has exceeded all expectations.

The German publisher that is set to re-publish the works this year said that it has received orders for more than 15,000 copies, but has an initial print run of just 4,000 copies.

Hitler began dictating the book to Hess while imprisoned for what he considered to be “political crimes” following his failed Putsch in Munich in November 1923. Although Hitler received many visitors initially, he soon devoted himself entirely to the book.

As he continued, Hitler realized that it would have to be a two-volume work, with the first volume scheduled for release in early 1925. The governor of Landsberg noted at the time that “he [Hitler] hopes the book will run into many editions, thus enabling him to fulfill his financial obligations and to defray the expenses incurred at the time of his trial.”.

He writes that there is a global conspiracy by the Jewish people to take over the world. It was used by the Nazis to propagate their ideas and way of life.

fter becoming chancellor of Germany in 1933, Hitler began to distance himself from the book and dismissed it as “fantasies behind bars” that were little more than a series of articles for the Völkischer Beobachter and later told Hans Frank that “If I had had any idea in 1924 that I would have become Reich chancellor, I never would have written the book.”

The new edition has had its 2000 pages annotated so that explanation and historical context can be applied to the work.

The publisher of the new edition is the Munich Institute for Contemporary History said that it has received requests for translations into other languages such as French, Italian and English, as well as Chinese, Korean, Turkish and Polish.

Germans are divided over whether the works should be republished, as the country continues to come to terms with its past. Many Jewish leaders have stated that they believe the book should continue to be banned.

In response, the publisher says that its newly added annotations have been included so that Hitler’s claims can be proved wrong.

When the original version was published in the 1930s, it was a bestseller and sold around 12 million copies. When the war ended the book was banned by the Allied powers.

The publisher says that it hopes a new edition will prevent it being a symbol and something for neo-Nazis to admire.