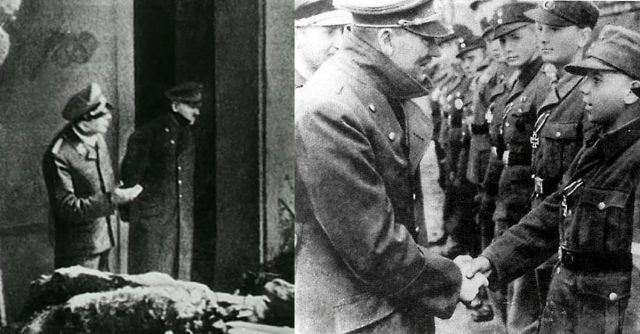 Towards the end of Hitler’s life some believe his erratic behavior and physical appearance was caused by Parkinson’s disease.

A new study into neurological diseases reports that Hitler may have become reckless and violent due to the degenerative disease.

Evidence from documents and accounts at the time showed that Hitler had developed a tremor in his hands and many now believe that Parkinson’s would have caused this as well as his irrational decision making.

The study was conducted by a team of researchers at the University of Pittsburgh and its findings were subsequently published in medical journal, World Neurosurgery.

The results of the study claim that from analyzing video footage through the last 10 to 12 years of his life there is a noticeable deterioration of Hitler’s motor function and by the time he committed suicide there was a severe tremor in both of his hands.

A separate study has also suggested that Hitler was addicted to drugs. The study as part of a National Geographic programme said that Hitler had manic depression and he used drugs to help normalise himself. Many believe that he was actually bipolar and he took drugs in order to manage it.

Historians have also reported that Hitler had a doctor inject him with glands from young bulls in order to increase his libido when he was in a relationship with Eva Braun, since she was much younger than him.

Other symptoms of Parkinson’s disease are a slow walking pace, a slight bend in the posture, difficulty focusing, lethargy and lack of motivation.

If Hitler did have Parkinson’s disease many of the researchers behind these studies believe that it may have caused him to make rash or incorrect decisions during the war, such as invading Russia too early in 1941 and the lack of defense at Normandy when the Allies undertook the D-Day landings.

Many other traits have been pinned to Parkinson’s disease including Hitler’s volatile personality, and his characteristic of no remorse or sympathy for others, the Mail Online reports.

Hitler had shown traits of volatility long before the mid-1930s as well, so Parkinson’s disease may have exacerbated what was already there in his personality.