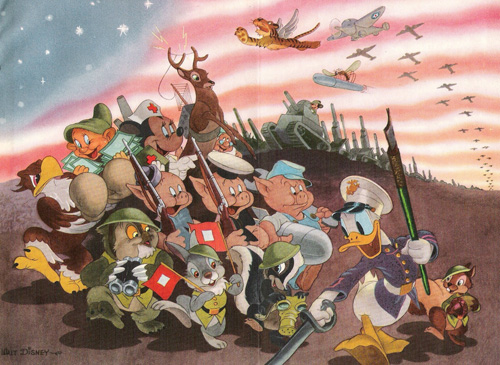 Few remember Disney characters during the war, but children’s favourites Donald Duck and Mickey Mouse played a role in the US Government’s education and communications programmes to the general public during war time.

Commando Duck was a film made by Disney showing Donald Duck fighting the enemy. Donald Duck was said to represent the average American man who was frustrated and wanted to take fighting the Nazis on himself, and even more so than Mickey Mouse.

In Commando Duck, Donald was the face of the home front in the US, while Mickey Mouse was the warden.

The documentary explores how Disney made a series of films mainly to help the general public understand how they could help the war effort from home.

Some of the films showed how to collect war bonds, while others showed how Nazi supporters were indoctrinated in to the Third Reich’s regime.

The programme has been developed to commemorate 70 years since the end of World War Two and to investigate why the US Government felt it needed to turn to Disney to help with its home-grown war time propaganda. The programme will interview historians and feature archive audio of the original voice of Donald Duck.

The Spirit Of 43, was another of the films made and presented Donald Duck praising the benefits of taxes, while The Fuhrer’s Face portrayed Donald Duck having a nightmare that he was working at a Nazi artillery factory. During Commando Duck the cartoon duck destroyed a Japanese command base.

Specialists in the history of Disney say that Mickey Mouse had been the studio’s original hero and what the entire company was built on, so there was reluctance to tarnish that image. It was therefore decided that Donald Duck would become the face of World War Two. They also say that there was no other character better equipped to fight Hitler than Donald Duck.

The man who provided Donald’s original voice, Clarence Nash, also says that Donald was a typical American and could voice his opinions very vocally, The Telegraph reports.

Shortly after the movie, The Spirit of 43, was shown polls showed that around 37 per cent of American citizens felt more inspired to pay taxes.