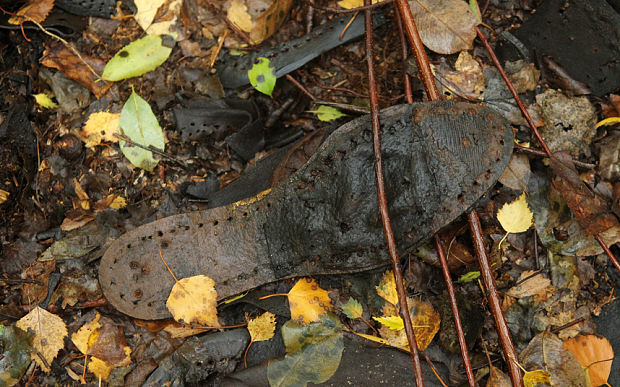 In a forgotten part of the forest near the once-dreaded Stutthof Nazi concentration camp are scattered hundreds of pairs of discarded shoes, some of them obviously belonging to children. Piled on top of each other almost as far as the eye can see, the shoes cover hundreds of yards of the forest.

These shoes have finally been discovered after decades of going unnoticed. The shoes and the other items found—including belts, clothing, and parts of uniforms—are relics of the Jewish and Polish victims of the concentration camp.

The Stutthof camp lies in northern Poland, which was once part of the Nazi regime. It is estimated to have been responsible for at least 85,000 deaths. The camp was well-known for the barbaric treatment of its prisoners – forcing them into slave labor and conducting tests for turning the human fat of its victims into bars of soap.

Whenever new prisoners arrived at the camp, Nazi soldiers would strip them of their shoes, clothes, and other belongings and force them to wear wooden clogs on their feet. The prisoner’s shoes would then be sold to the German population. It is a mystery why these particular shoes and other articles were discarded in the forest.

Another mystery is why this forest of shoes has remained undiscovered for so many years. Danuta Drywa, the head of archives at the museum inside the camp, admits, “I’ve been working here thirty years and none of the employees have ever heard of these items lying in the forest near the museum.” She theorizes that the items may have been tossed into a rubbish heap in the forest, which has now flattened over the years.

Another possible explanation is that the forest may have once been part of the camp’s premises. The working area of the camp would regularly expand or contract based on the amount of work required by the manufacturers that used prison labor, The Telegraph reports.

Regarding the articles, Ms. Drywa added, “To define exactly what kind of shoes they are, how old they are and what country they came from will need specialized testing.”