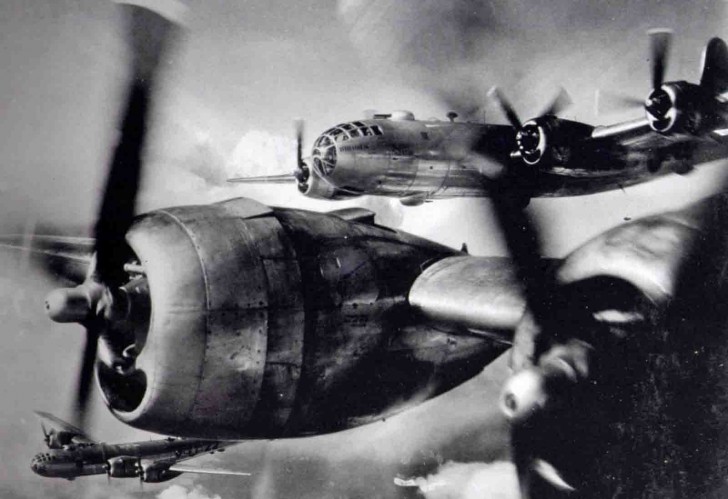 The most amazing story.

Henry Eugene “Red” Erwin, Sr., (May 8, 1921 – January 16, 2002) was a United States Army Air Forces airman and a recipient of the U.S. military’s highest decoration—the Medal of Honor—for his actions in World War II. He earned the award as a staff sergeant and radio operator aboard a B-29 Superfortress in the Asia-Pacific theater. During a 1945 bombing mission over Koriyama, Japan, a phosphorus bomb prematurely exploded in his aircraft and seriously wounded him. As smoke filled the plane, he picked up the burning device and carried it through the aircraft to the cockpit where he tossed it out a window. Although he suffered severe burns, he successfully saved his plane by disposing of the smoke-generating bomb.
Military service
Born on May 8, 1921, in Adamsville, Alabama, Erwin joined the Army Reserve from nearby Bessemer on July 27, 1942. Called to active duty as an aviation cadet in the Army Air Forces on February 3, 1943, he trained as a pilot in Ocala, Florida, but washed out due to “flying deficiency”. He was instead transferred to technical school at Keesler Air Force Base, Mississippi, as a private first class in July of that year. He completed further radio operator and radio mechanic training in Sioux Falls, South Dakota, and Madison, Wisconsin, until his graduation in 1944.

Assigned to the 52nd Bombardment Squadron, 29th Bombardment Group, 20th Air Force, in Dalhart, Texas, Erwin and his unit left for the Asia-Pacific theater in early 1945.From February 25 to April 1 of that year, they participated in a series of un-escorted bombing strikes against cities in the heart of Japan. For these missions, Erwin, by then a staff sergeant, received two Air Medals.

Medal of Honor action
On April 12, 1945, Erwin, called “Red” by his crewmates, was serving as the radio operator aboard a B-29 Superfortress named City of Los Angeles, piloted by Captain George Simeral. The plane was in formation for a low-level attack on a chemical plant at Koriyama, 120 miles (190 km) north of Tokyo, on their 11th combat mission. Along with their primary jobs, the twelve B-29 crew members had additional duties to perform. Erwin’s was to drop phosphorus smoke bombs through a chute in the aircraft’s floor when the lead plane reached a designated assembly area. He was given the signal to drop the bombs when the aircraft was just off the south coast of Japan and under attack by anti-aircraft fire and Japanese fighters.

Erwin pulled the pin and released a bomb into the chute, but the fuse malfunctioned and ignited the phosphorus prematurely, burning at 1,100 degrees. The canister flew back up the chute and into Erwin’s face, blinding him, searing off one ear and obliterating his nose. Smoke immediately filled the aircraft, making it impossible for the pilot to see his instrument panel. 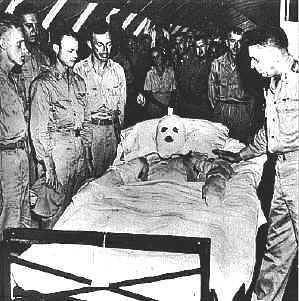 The pilots could not see. The plane began a dive. It was certain that death would come, but would it be from the certain crash or the explosion from the munitions? Then the crew saw what had to have seemed to them an apparition as Irwin, totally aflame, located the burning phosphorus bomb and grabbed it with his right hand! Holding the white-hot canister against his rib cage, he somehow made his way towards a plane window by the navigator’s station. The navigator’s table blocked his progress and the seconds it took to raise it must have seemed like an eternity. Fellow crewmen remember Erwin saying: “Excuse me.” as he stumbled past them into the cockpit to throw the bomb out the window.

Erwin was afraid the bomb would burn through the metal floor into the bomb bay. Completely blind, he picked it up and feeling his way, crawled around the gun turret and headed for the copilot’s window. His face and arms were covered with ignited phosphorus and his path was blocked by the navigator’s folding table, hinged to the wall but down and locked. The navigator had left his table to make a sighting. Erwin couldn’t release the table’s latches with one hand, so he grabbed the white-hot bomb between his bare right arm and his ribcage. In the few seconds it took to raise the table, the phosphorus burned through his flesh to the bone. His body on fire, he stumbled into the cockpit, threw the bomb out the window and collapsed between the pilot’s seats.

The smoke cleared enough for Simeral to pull the B-29 out of a dive at 300 feet (91 m) above the water and turn toward Iwo Jima, where Erwin could be given emergency treatment. His crew members extinguished his burning clothes and administered first aid, but whenever Erwin’s burns were uncovered, phosphorus embedded in his skin would begin to smolder. Although in excruciating pain, he remained conscious throughout the flight and spoke only to inquire about the safety of the crew. Once at Iwo Jima, medical personnel didn’t believe he would survive. 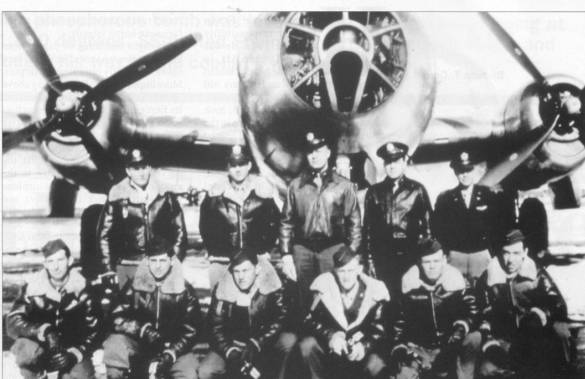 Erwin is 2nd from the right, front row, with his B-29 crewmates 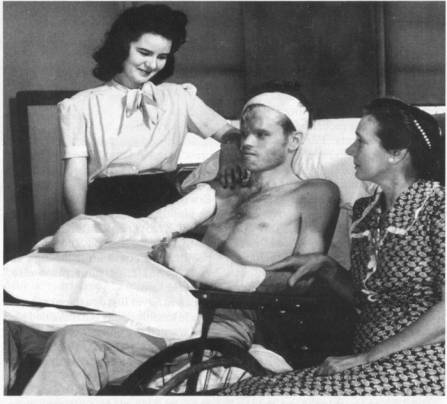 Henry Erwin with his wife Betty and his mother.

Army Air Force officials, led by Major General Curtis LeMay and Brigadier General Lauris Norstad, approved Erwin’s award of the Medal of Honor in a matter of hours, so a presentation could be made while he still lived. A medal was flown from Hawaii to Guam and presented to him in the hospital there.

However, Erwin survived his burns. He was flown back to the United States, and after 30 months and 41 surgeries, his eyesight was restored and he regained use of one arm. He was given a disability discharge as a master sergeant in October 1947. In addition to the Medal of Honor and two Air Medals received earlier in 1945, he was also awarded the Purple Heart, the World War II Victory Medal, the American Campaign Medal, three Good Conduct Medals, the Asiatic-Pacific Campaign Medal with two bronze campaign stars (for participation in the Air Offensive Japan and Western Pacific campaigns), and the Distinguished Unit Citation Emblem.

Erwin in 1995 at a ceremony commemorating the 50th anniversary of the end of World War II
For 37 years, Erwin served as a benefits counselor at the veterans’ hospital in Birmingham, Alabama. In 1951, his story was included in the movie The Wild Blue Yonder; Erwin was portrayed by Dave Sharpe.

Erwin died at his home on January 16, 2002, and was buried at Elmwood Cemetery in Birmingham, Alabama. His son, Hank Erwin, became an Alabama state senator. 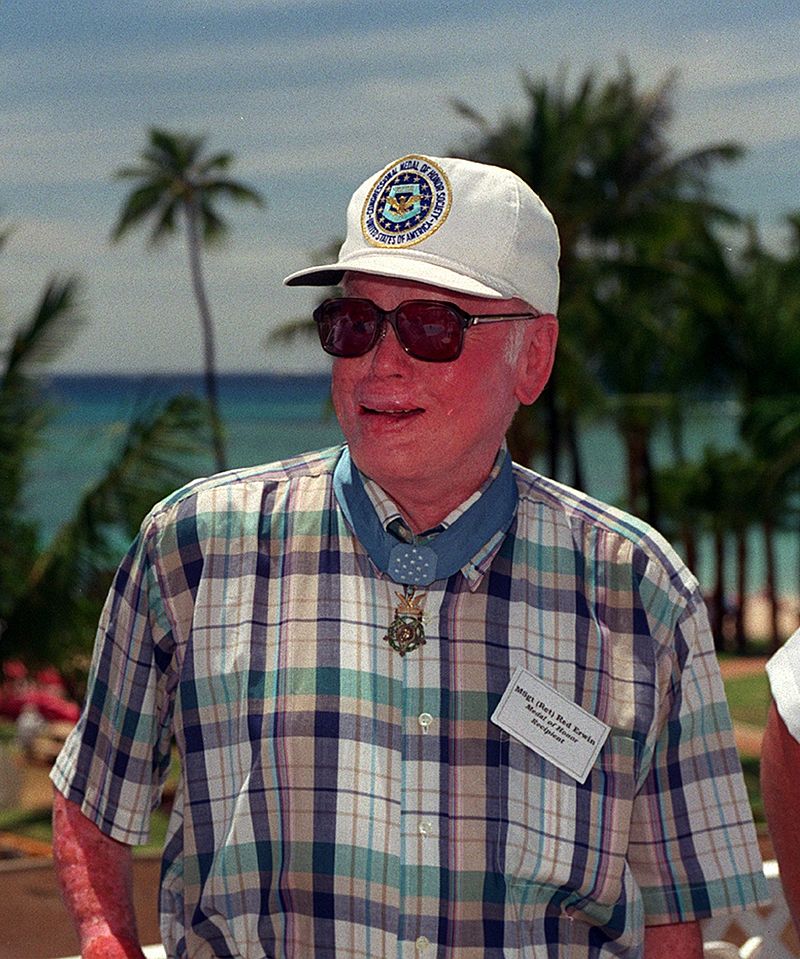 He was the radio operator of a B-29 airplane leading a group formation to attack Koriyama, Japan. He was charged with the additional duty of dropping phosphoresce smoke bombs to aid in assembling the group when the launching point was reached. Upon entering the assembly area, aircraft fire and enemy fighter opposition was encountered. Among the phosphoresce bombs launched by S/Sgt. Erwin, 1 proved faulty, exploding in the launching chute, and shot back into the interior of the aircraft, striking him in the face. The burning phosphoresce obliterated his nose and completely blinded him. Smoke filled the plane, obscuring the vision of the pilot. S/Sgt. Erwin realized that the aircraft and crew would be lost if the burning bomb remained in the plane. Without regard for his own safety, he picked it up and feeling his way, instinctively, crawled around the gun turret and headed for the copilot’s window. He found the navigator’s table obstructing his passage. Grasping the burning bomb between his forearm and body, he unleashed the spring lock and raised the table. Struggling through the narrow passage he stumbled forward into the smoke-filled pilot’s compartment. Groping with his burning hands, he located the window and threw the bomb out. Completely aflame, he fell back upon the floor. The smoke cleared, the pilot, at 300 feet, pulled the plane out of its dive. S/Sgt. Erwin’s gallantry and heroism above and beyond the call of duty saved the lives of his comrades.