The B-17 Flying Fortress was a few years away from becoming the iconic warplane of the American air force in WWII, when six planes took off from Langley Field on February 16, 1938 for what would be seen as a milestone intercontinental mission.

The distinctive roar of the B-17 plane’s Cyclone 9 engines (which was able to generate 22,500 horsepower collectively) was so loud that spectators couldn’t help but look up and see the plane in flight. Since the first B-17 arrived at Langley almost a year before in 1936, the 2nd Bombardment Group had become a pioneer for long-distance flight training which began with a non-stop flight that spanned 1,700 miles across 20 American cities in May of 1937.

On February 16, 1938, the destination of the massive plans were said to be even more ambitious than the 4,216-mile flight from Langley to Panama that the B-10B bombers made in 1937. The B-17’s destination was to Buenos Aires, Argentina. A few months before, officials in Washington were concerned about the growing influence in Latina America from the Germans and Italians. The US watched with apprehension as three Italian bombers who were commanded by Bruno Mussolini-the youngest son of the Italian dictator-visited Brazil.

Franklin Roosevelt approved the B-17 flight commanded by Lieutenant Colonel Robert Olds and crewed by such soon-to-be prominent officers as 1st Lt. Curtis E. LeMay, who would become internationally known as the influential Chief of Staff of the U.S. Air Force in 1961. The mission stopped at Miami, Panama, and Lima, Peru. The bombers arrived at El Palomar Military Air Base in Argentina on February 17 and they conducted a fly over for the inauguration of President Roberto M. Artiz three days later. They returned to Langley from Santiago, Chile, Lima and Panama. This completed nearly an 11-hour flight direct from the Canal Zone on Feb. 27.

The 11,952 mile trip earned the Flying Fortress and the 2nd Bombardment Group extensive favorable attention from the press in both Latin America and at home. The Daily Press reports it also won the 1938 Mackay Trophy as the Air Corps’ “most meritorious flight of the year.” “This flight of over 10,000 miles was accomplished with a high degree of skill in pilotage, navigation and maintenance proficiency,” Secretary of War Harry H. Woodring noted.

It also demonstrated to the world the potential of a warplane that would play a defining role in the Allied victory over Germany and Japan during World War II. 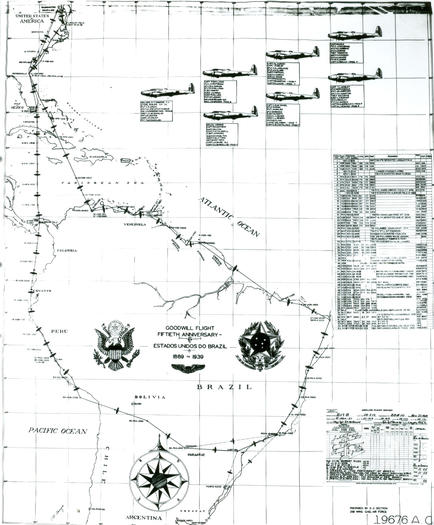