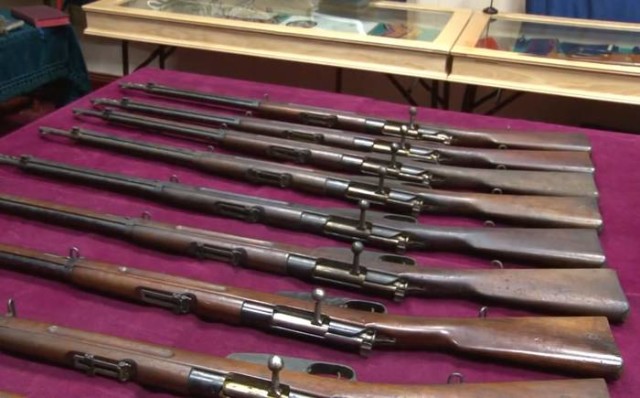 Members of the Orange Order have discovered 10 antique rifles that have been stashed away in a cupboard for over 100 years. The cupboard where the rifles were concealed is located in a neglected room of Clifton Street Orange Hall in north Belfast.

The members were in the process of clearing out the cupboard when they came across the rifles and ammunition. They were expecting to find stationery and banners inside. One of the Orange Order members, Ronnie McDowell, said they were initially panicked by their discovery:

“We were worried at first, as it is not every day that you open a cupboard and you see rifles and ammunition staring back at you. Finding out they are antique weapons with an antique calibre is great excitement.”

“All the weapons date from before World War One and the circumstances in which they were found indicate that they had not been disturbed for many decades. Orange Order members facilitated a search of the hall to ensure that no other weapons were present.

“Police are satisfied that the Orange Order members contacted them immediately on making the discovery and that none of the existing members were aware of the existence of these weapons.”

Each of the 10 rifles are stamped with the words “Ulster Volunteer Force” . This paramilitary force was set up prior to the First World War, to resist any attempts to take Ireland out of the United Kingdom. The force had tens of thousands of members and they trained to defend any attempt to establish a separate Irish State. However, the outbreak of WWI prevented any confrontation over the issue of Irish Independence.

In 1914, the UVF, almost to a man, enlisted in the British Army and they served with great distinction in the trenches, including the Somme. Many former UVF men were decorated for their bravery during the War.

It is thought that the weapons were part of a 1914 shipment of 25,000 rifles that were smuggled into Larne on board the Clyde Valley coal ship (pictured above). Closer analysis of the 10 rifles confirmed that they were manufactured in Austria in 1904 and formed part of a hoard of weapons from the 1914 Larne gunrunning operation. Once they reached the shore it is believed that the guns were dispersed; some were used to arm the Ulster Volunteer Force while others were hidden by unionists.

The 10 rifles are now back at Orange Hall and are on public display in its museum.