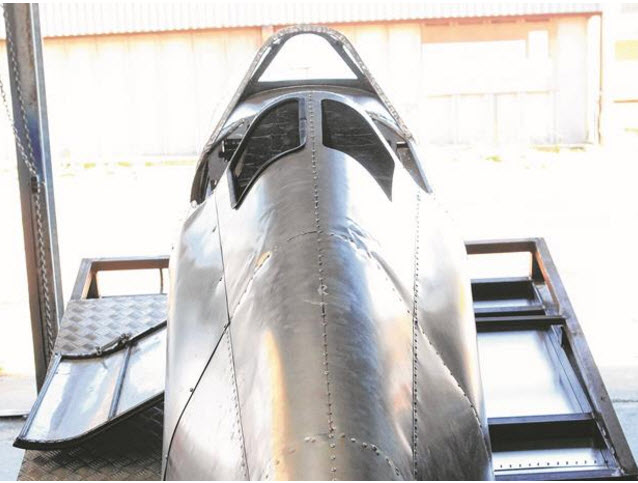 Few aircraft have achieved the iconic status enjoyed by the British Second World War Supermarine Spitfire, the aircraft which, alongside the Hawker Hurricane, took part in the Battle of Britain in July 1940. The Spitfire went on to become the mainstay of the Royal Air Force’s Fighter Command, and in total, some 22,000 aircraft were built before production finally ceased on 20th February 1948, almost twelve years after the first Spitfire left the Southampton factory.

These aircraft were fast. Fitted at first with the successful Rolls-Royce Merlin engines, and later with the Rolls-Royce Griffon, a Spitfire could attain a maximum speed of 454 miles per hour and climb to 43500 feet.  Armed with Four 20mm Mk 5 Hispano-Suiza cannons and three 500lb bombs, it was a formidable opponent.

Spitfires began their operational service with the RAF in May 1940, when they were active in France, preventing Nazi bombers from attacking the evacuating British forces at Dunkirk. They were later used as night fighters, and as photographic reconnaissance aircraft – something that continued throughout the war.

During the Battle of Britain, Hurricanes were used to attack Luftwaffe bombers, and Spitfires dealt with the escorting fighters. Hurricanes accounted for a greater number of aircraft, but fewer Spitfires were lost in battle. Overall, the Spitfire’s kill ratio was better.

Spitfires continued in service with the RAF until 1954, and with other air forces around the world well into the early 1990s. There are currently around 50 Spitfires in flying condition, most of them in private hands. Only one Second World War aircraft survives, and is kept at an RAF museum in Shropshire.

The romance of the Spitfire refuses to die, and a husband and wife in Sheppey, Kent, are keeping it alive in an unusual way. Bob and Vicki Watson have already hand-built an almost full-size replica of a 1916 First World War Bristol M1C bomber, and now they are completing a half-size Spitfire.

Looking identical to the real thing, and accurately constructed from aluminium, the replicas are not designed to fly.  Complete with hydraulic controls and full instrument panels, the planes will be used as flight simulators at air shows and exhibitions around the UK. They are even equipped with a laser and can “shoot down” enemy fighters and will feature realistic sound effects.

Bob first had the idea when he sat in a simulator at an air show. He was disappointed with the simulator’s box-like appearance, and the lack of reality. Bob and Vicki’s aircraft look real, and have hydraulically operated controls – they are the nearest you can get to the real thing without actually leaving the ground.