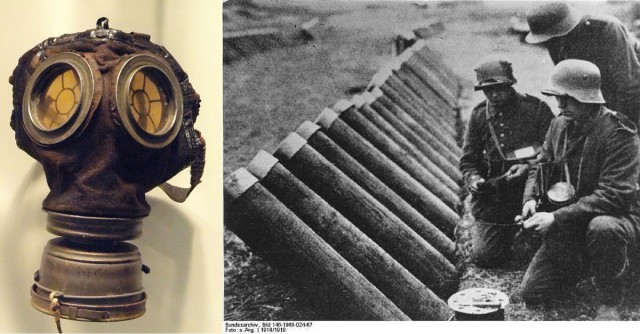 Mustard gas was a major weapon that was first used in World War I.  It was easy to use but left terrible marks and reminders on the victims.  Now the fighting in Syria has shown that the people there have begun to use the chemical again.

One agent has been identified as being used in some of the chemicals was the gas: bis-2-chloroethyl sulfide, also known as Yperite.  The gas got the name when it was used near the Belgian city in Ypres in July 1917 by the German army.

The gas was already being used in experimental tests nearly two years previous to the first attack on April 22, 1915.  The German group who was testing the gas dubbed the mustard gas “LOST” in a reference to the chemists who made up the compound.  Due to the deadly effects of this gas, there were gasmasks made to try to protect the men.  However, the gas proved deadly and went right through the masks and immediately began attacking the skin.  French chemists developed a newer, effective type that is said to have helped in the Battle of the Marne in 1918.

Millions of people were left dead during WWI, so in comparison, there were few casualties attributed to mustard gas.  It was not used that often and did not kill the enemy in droves.  Instead, the gas would leave life-threatening and lifelong issues for the men who got too close to it.

According to the French chemist, Jean-Claude Bernier, this gas is a yellow, oily substance that smells like garlic or mustard.  It does not need to be inhaled to do damage, as it finds its way to exposed skin and can remain active for several weeks, leaving its victim in agony.

The gas causes the skin to break out into blisters, irritates the eyes, and can even cause the eyelids to swell up, possibly blinding the victims temporarily.  The worst reaction is the internal and external hemorrhaging of the lungs.  Victims tend to die within four to five weeks after being exposed; they develop pulmonary edema because the liquid accumulates in the respiratory system.

There are two ways mustard gas can be used – it can be shot from a cannon, or it can be dropped from aircraft.  These techniques were used many times throughout the war.

After World War I, there were several other countries who used the gas. One of them was Russia in 1919.  It was used in Morocco by the French during the years of 1923 to 1926, and also in Libya when the Italians used it in 1930.  Other places that saw its use were Xinjiang, China when the Japanese used it in 1934, and Ethiopia by the Italians between the years of 1935 to 1940.

In 1943 during an air attack at Bari in Italy, a US Liberty Ship that was carrying Mustard gas shells was hit by a Luftwaffe attack. At least 83 military victims died of exposure to the gas.