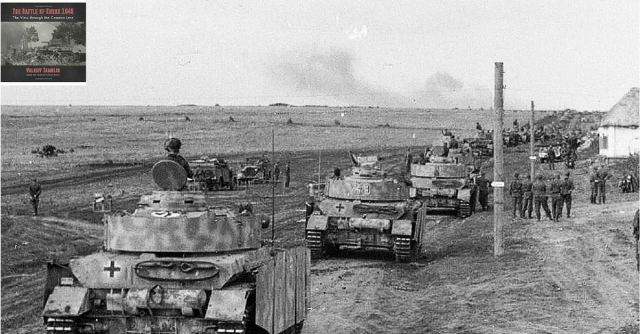 Put your feet up and chillax chums because a serious candidate for ‘book of the year’ is in and we aren’t yet half way through it.

I accept I am biased in favour of well made photographic archive books but even they can be bounced off the Richter Scale every so often by a book that is so classy it puts others to shame. This book by ValeriyZamulin is exactly what I am talking about.

Everyone knows Kursk, the king of battles with it’s etched on the brain vistas of burning panzers on a fireysavannah of death and destruction.  There was much, much more to it, of course, and Mr Zamulin follows the optimum path by building a narrative of what was quite a complex battle; to explain it through the eyes and lenses of Soviet and German photographers. The result is nothing short of majestic.

I could wax lyrical about the pictures until the cows come home, but the truth is the real glory of this book is in the captioning and careful attribution of images to a wide range of sources. When you see the captured German images on display here it begs the question just how much is there in the Russian state archives for us to marvel at? But don’t let these wonderful German photographs detract from the power and the glory of the small army of Russian press and military snappers at work.  There are works of genius here.  Thankfully after we’ve taken it all in, the author provides us with a biographical section listing a huge number of top brass, rank and file and the photographers who made the Battle of Kursk what it is in our consciousness.  Getting the detail right is the seal on a genuinely great book and after several perusals I don’t think I’ve found anything to quibble over.

The book was published in Russia over a year ago and this volume has been edited and translated by Stuart Britton, someone of considerable knowledge and experience in this field. It is nice in some ways to know for all the current ripples in relations between the Russian state and western nations that a little harmony can be reached through books like this one.

Years ago when I was working for the music paper Melody Maker we got into a reciprocal deal providing a library in Leningrad with copies of our paper in exchange for cultural and, to be fair, propaganda magazines from the old USSR.

They were always a hoot to read, but the photography had something about it that presented a hint of the style and artistry of photographers in the Soviet Union. That kind of quality and immense ability was not new and you can see in this book where the pinnacle of it was reached, along perhaps with the imagery of the cosmonauts who thrilled the world over half a century ago.

We used to snigger at Zenith cameras and other shoddy copies of German photographic products the Soviets used to market, but a bad workman always blames his tools and there is no poor workmanship in the photography here. The nationality of the actual cameras the Russians were using may be a moot point, but you cannot mask true skill whatever the kit being used.

1943 was a disastrous year for the Third Reich. A quarter of a million men were left behind as prisoners in North Africa. Italy was knocked out the war and the second front was imminent. German cities were being pounded as Arthur Harris lived up to his promise of them reaping a whirlwind.  But it was in the Soviet Union that the longest nails were being hammered into the coffin of Nazi aggression.

The Battle of Kursk was massive but it was but one step on the road to the Brandenburg Gate. The man who photographed that classic image of the frontovicki unfurling the Soviet flag in Berlin was at Kursk, too, and his pictures are on some of the four hundred odd pages of images we have here. EvgeniiAnan’evichKhaldei is just one of the stars of this masterpiece.

The book weighs as much as a wheel from a T34 and you won’t be able to prop it on your lap for very long. But it is as rich as it is heavy and Mr Zamulin has given us something we can really get to grips with. He makes Kursk more real, more personal and incredibly vivid. I love this book. It is inspirational and perhaps one day I will put the knowledge I have gained from it to good use. Save yourselves time and don’t wait for Christmas lists. I guarantee, you will not be disappointed. 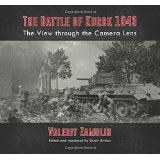 THE BATTLE OF KURSK 1943
The View Through the Camera Lens
By Valeriy Zamulin
Edited and translated by Stuart Britton
Helion& Company
ISBN: 978-1-909982-85-7