This book by Nick Thomas recalls the life of the singularly brilliant George Beurling, the youthful Canadian fighter ace of World War II renowned for his experiences during the defence of Malta where he amassed an enviable total of victories over German and Italian opponents.

A recent TV documentary attempted to convey Beurling’s idiosyncratic style – a man sometimes branded as a lone wolf when in fact he was just a lot quicker at the game than many of his comrades. Our hero is remembered for his remarkable eyesight that allowed him to spot distant enemies none of the men flying him with had even registered. He had learned to be a crack shot and worked hard at improving his deflection shooting.  If you had seen the England rugby union team win the Six Nations recently you might recognise the methodology of the England kicker as he prepared to convert, picturing the arc of the ball in flight before he kicked it. George Beurling was economical with ammunition and very precise about his attacking methods. To me he seems more akin to a Great War ace such as a Boelcke or a McCudden rather than any of his well-known contemporaries from WW2.

Beurling had difficulties with authority and convention and his tardy attitude to uniform and the niceties of RAF officialdom worked against him at times. It seems incredible that he was a pilot in the British air force at all, given a lack of formal education that saw him rejected back home in Canada. But necessity is the mother of invention and the RAF were pleased to have an enthusiastic man who had learned to fly at his own expense.

Beurling really was one of the great aces only really happy when he was flying. His skill was matched by great courage and resilience and he continued to fly regardless of injuries.  Mr Thomas takes us through his aerial victories in detail and we can follow every manoeuvre as he closes in for the kill. Some of it is a bit gory and we learn how Beurling’s exploits became essential stuff for a competitive Canadian media keen to wring every last sale out of our hero. Attention was lavished upon him and we see how Beurling was pounced on by anyone with vested interests as he became a useful tool for politicians, hacks and the brass of the Royal Canadian Air Force. There are similarities in his tale with others including the men who raised the Stars and Stripes on Iwo Jima and the Dambuster Guy Gibson. All these men were diminished in some way when they were manipulated in an alien environment away from what they had come to know best and finding a way back often ended in tragedy.

George Beurling was a fighter pilot. It was all he knew and after World War II he found himself looking for a return to his own version of reality flying for the new Israeli Air Force against aggressive Arab neighbours. It cost him his life, although this was the result of an accident on his way out to join the fight.

A sad ending is not all we are left with but like those Great War aces Beurling really does fit the convenient image of brilliance and futility. Perhaps this is a bit too deep but his loss is tragic in my view and we should mourn him. He was just twenty-six when he died and it is important to remember his brief period of greatness occurred when he was just twenty-one years old.  He really was a very special fighter pilot.

Mr Thomas tells his story well. The book cracks along and like a lot of aviation histories the text is supplemented with a great deal of information about the principal subject’s contemporaries. This all helps build a detailed look at the man and I suppose this is essential to help bolster a story of someone so young. The author has only so much to play with and he really makes the most of everything in his arsenal.

I enjoyed reading this book. Right since the age of Chaz Bowyer, aviator biographies have had a very similar format and style and there seems little point in tinkering with the methodology. I have read a few that have helped cure any hints of insomnia I might have, but this one did not have such an effect. To grab a simplistic one liner and say Barnes brands the book ‘not boring’ doesn’t do it justice.  There is a lot going on here and the breathless descriptions of air combat and rescues at sea really work for me.  Mr Thomas has done a first rate job and I hope his book does well. He has latched on to a man who deserved having a balanced and respectful biography for the modern reader. This is that book.

It will do much for patriotic Canadians as well, but we should all admire George Frederick Beurling wherever we happen to reside. He was the real deal. 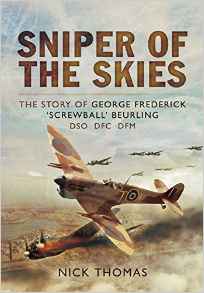