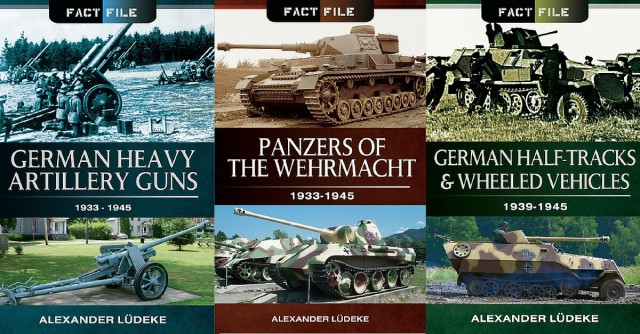 As we have been discussing Christmas in recent missives it seems sensible to highlight some neat little books from Pen & Sword by Alexander Ludecke that make ideal stocking fillers.

These paperbacks fall in to the Fact File range from this publisher and while I haven’t seen any previous outings the three we have here are really very nice for what they achieve within the format.

This time round we have German tanks, heavy artillery and half-tracks to entertain us.

All three come with a good mix of text, archive photographs and some nice original artwork by Vincent Bourguignon accompanied by a degree of technical information.

Panzers of the Wehrmacht includes all the usual suspects and also takes a look at some of the design concepts and prototypes that never made it on to the production lines. Tank books are always a nightmare because they are, like music and football, open to intense subjectivity; but I have to say that Mr Ludecke really goes for it within the space.  I put 2015 down as a bit of a highlight year for German armour in my bit of the world because I got to see a running Tiger, Panzer III and 38T. Hopefully I will add a Panther to the list some time soon.

I have always loved the German half-tracks ever since I built my first Airfix Sd.Kfz 7 bought from Woolworths in sunny Stoke Newington a million years ago.

Of all the military vehicles I have seen I am always drawn to the things Hanomags, Demags, I am not fussed. For me they are the quintessential MV and they put a smile on my face. German armoured cars are also pretty cool and I would love to see any of the big eight wheelers, not that many survive. Other wheeled vehicles hold less fascination, but there are always exceptions.

Artillery is not my strongest point and this book helps explain a few things  – which is precisely the point of it. Guns and projectile launchers of all shapes ansd sizes are included from Panzerfausts to colossal siege guns.  I have a lot of fun rummaging around in old bunkers with my mates and it is good to see what went into them.

I don’t mind saying I think these books are ideal for people new to our military world. They certainly whet the appetite for armour, MVs in general and artillery. I did the tried and tested thing and gave them to my son to look at with the closed question “would you have liked these when you were a lad?” and his answer was an emphatic “yes”. I think that just about covers it.  I am not so young and I like them a lot. Good stuff.

All from Pen & Sword Military.