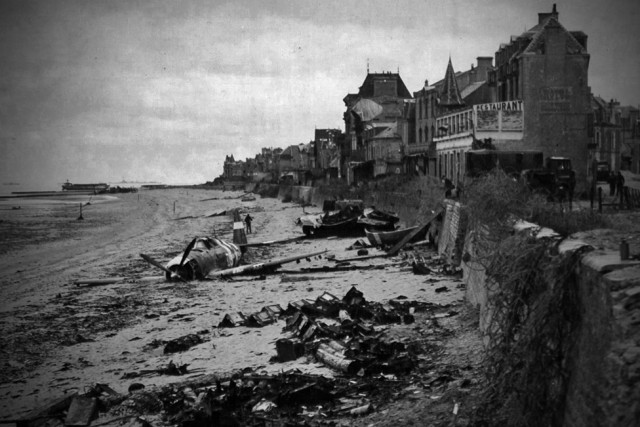 On D-Day+6, 12 June 1944, the Allied forces have settled on the Normandy Beach heads, with artificial Sea Ports and Advanced Landing Grounds (ALG’s). See here unique photos from Gen. Hap Arnold´s private album as he meets with the Generals Eisenhower, Spaatz and Bradley on the first liberated soil of France.

On this photo, we see a low fly pass of a C-47 that snatches an Assault Glider Waco CG-4A. With 15 people onboard, the ensuing rocket start of the Glider must have been an exciting event, a roller coaster that was catapulted from 0 to 100 mph in only 2,5 seconds. That is a better acceleration than the fastest Ferrari could ever do! The shock load was taken by the flexible cable that stretched and compensated for the difference of speed of both aircraft. The glider concept was tricky at times , especially at landing, yet the air lifting capacity of the C-47 was improved with 60 % ( 24 paratroopers and 15 soldiers in the glider)

The versatile C-47 was not only used for the cargo haul of food, fuel and ammo, she also did an epic job with the massive para droppings and glider towing flights over Normandy, that started in the early hours of 6 June 1944. In the ‘heat of the night’ , it was a huge fleet of C-47’s that would launch the biggest combined army/ air/ naval invasion operation in all human history. See my blog of last weekend (13 June 2015) about the installation of Advanced Landing Grounds , that facilitated the landing of the C-47 / Dakota in Normandy, only 3 days after that invasion had started. From there , the aircraft played also a role as a flying ambulance, evacuating 10’s of thousands of wounded soldiers back to UK hospitals and saving countless numbers of lives. 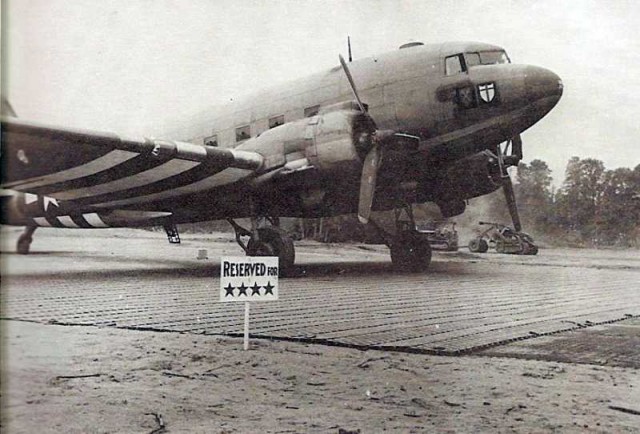 On D-Day+6, the situation on the Omaha Beach head was so well secured, that the US Top Brass decided to meet and greet on the ALG near Saint Laurant sur Mer, that was described last week. The Generals came in their personal C-47 transports. By lack of any Valet Parking Services, they had a reserved parking space. Reserved for **** was clearly not to be occupied by the lesser Dakota Gods that flew in for all sorts of war duties. 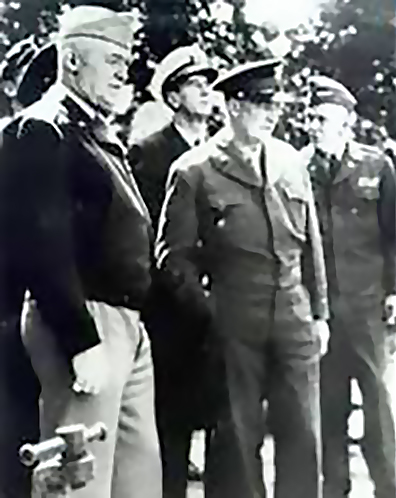 After the publication of my previous post a week ago, the grandson of General “Hap” Arnold (seen on this photo with General Eisenhower on that first gathering in France) contacted me and offered 3 photos from his Family Album, that I was permitted to publish. Courtesy “The Robert and Kathleen Arnold Collection”. 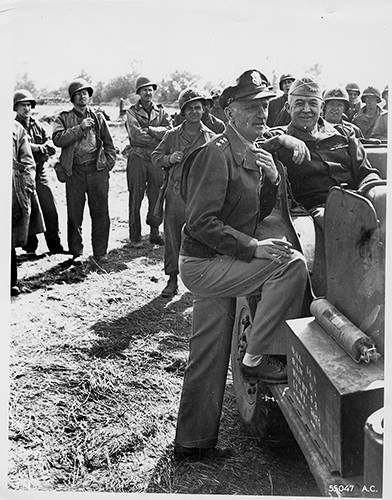 A very sharp photo from the same meeting on the Normandy ALG. Here’s Hap with Tooey Spaatz, then head of all US Air Forces in Europe and his very close friend. ( Photo and Text from Robert Bruce Arnold) 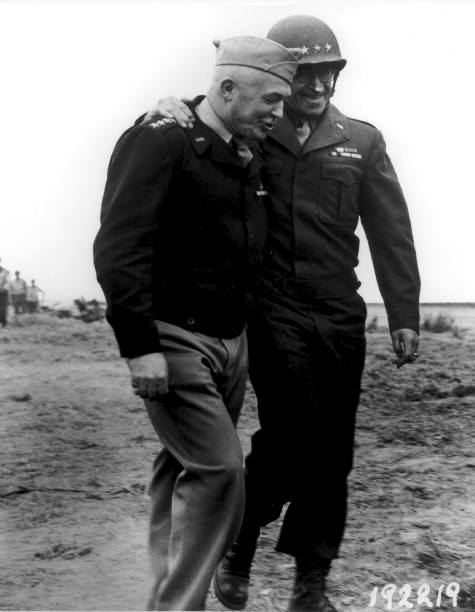 The final photo. Robert Bruce Arnold wrote me: “I spoke to the pilot of the C-47 that flew him in that day years ago. Gone now, sadly. Here’s the last one. This is Hap with Omar Bradley on Omaha Beach, same day as the other 2 photos”.

Thanks Robert , for sharing those historical photos with all of us, we love to see this little “unofficial” glimpse from the Glorious Days that took place on the Beaches of Normandy, now 71 years ago. 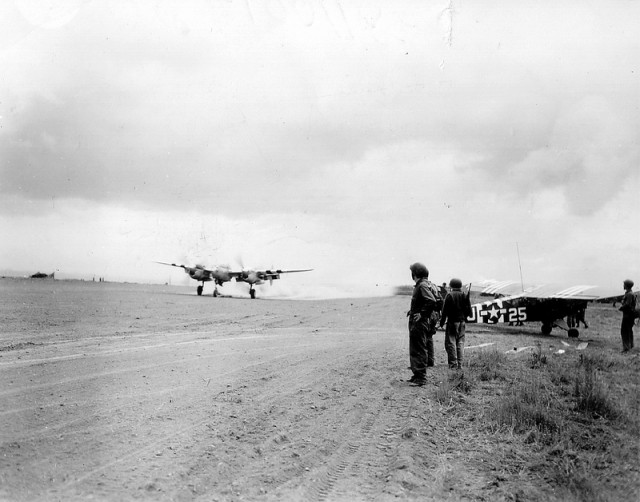 In Normandy, there were dozens of ALG’s constructed for the close air support to all Allied Forces that fought on the 5 Beach heads. The Lockheed P-38 Lightning was among the first fighters to land on the flattened corn fields just next t0 the Beaches, Even before the (Hessian or PSP) Matting of the soil was performed ( which was needed to carry the C-47’s 13 tons of max. weight), the Lightnings and at right, a Piper L-4 / J-3/ Grasshopper Light Observation aircraft, could land and give their support within 2 days after D-Day, one of those features that were never anticipated by the Germans.

Their Tank divisions moved in for an intended mopping up of the beach heads, but the Allied instant mass supply of soldiers and heavy weapons as tanks, howitzers in just a few days completely overwhelmed the enemy. Their fighting spirit remained high, but there was never any serious change that they could push the Allied armies back into the sea.

If you are interested in more such stories of the venerable Douglas DC-3/ C-47/ Dakota, may I recommend you my book “The Dakota Hunter”, 320 pages of adventurous tales, that I experienced in 20 years of travel and expeditions, in search of that Dakota. I encountered them at the last frontiers, from Alaska to the Amazon, from the Bolivian Alti Plano to Madagascar and beyond. Illustrated with 250 never before published photos, this book is surely to become a must read for any aviation buff, interested in the (wartime) history of the Dakota, but also its post war career with crashed, abandoned and operational DC-3’s that still fly to remote communities in the far outbacks of this world.

View my website www.dc3dakotahunter.com where you can take a sneak preview into the book and where you can order directly at Amazon USA/ UK. Also avialable in limited series autographed version.
You can follow or friend me at www.facebook.com/hans.wiesman, more interesting posts and photos on my FB page.