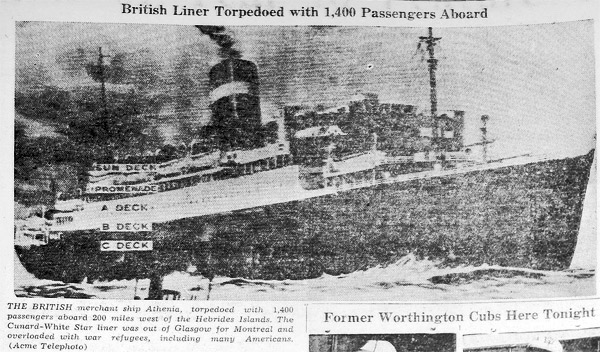 Early Monday morning, Sept. 4, 1939, the American ambassador to Great Britain, Joseph P. Kennedy, was awakened by an assistant with the news that a British passenger ship carrying several hundred Americans from England to Canada had been torpedoed and was sinking in the North Atlantic. This tragedy is the central event of my forthcoming historical novel WITHOUT WARNING.

Joe Kennedy was personally opposed to the war that England had declared against Germany less than 24 hours earlier. He knew President Franklin D. Roosevelt was sympathetic to the British cause, although Roosevelt had declared America would remain neutral in the European conflict.

Whatever concerns Kennedy might have had about the implications of such an attack, the ambassador went to work immediately, sending the following cable at 1:50 a.m. (London time) to Washington, D.C.
“Foreign Office has just telephoned that it is releasing to press report SS ATHENIA of Donaldson Line torpedoed 200 miles off Malin head with 1400 passengers aboard. S.O.S. received. Ship sinking fast.”

Other cables from Kennedy followed as information became available, tracing the piecemeal unfolding of the story.

6 a.m., Sept. 4: “Admiralty unable as yet to indicate whether ATHENIA has sunk or rescue arrangements. 101 American citizens embarked in her at Liverpool. Some embarked Glasgow but number not yet ascertained. Have been in touch with Consul there who will advise as early as possible.”

9:05 a.m., Sept. 4: “Have talked with the head of the Admiralty personally. They will have no further information until 12:00 o’clock our time when the first destroyer will have reached the scene of the catastrophe. Will of course keep you advised of all details and the Admiralty will give them to me as quickly as they arrive.”

An hour later, Kennedy cabled seven passenger names to be deleted from the first Liverpool list, and added six new names to that list. He quickly followed those messages with the names of 65 American who boarded Athenia in Belfast.

11 a.m., Sept. 4: “All on ATHENIA rescued except those killed by explosion. Admiralty advises me survivors picked up by other ships. List of casualties later. Thank God.”

A long communique issued by the British Admiralty and forwarded by Kennedy followed this cable. In it the British confirmed 311 Americans had boarded Athenia. The communique also claimed Germany had violated the London Naval Treaty of 1930 by its U-boat attack on Athenia, and in effect had declared unrestricted submarine warfare on allied shipping. Though dispassionate in its language, the message seemed calculated to inflame U.S. officials against the Nazi government.

6 p.m., Sept. 4: “Admiralty now says KNUTE NELSON carrying 800 and Wenner-Gren’s yacht SOUTHERN CROSS has 200. They have no advices (sic) from the destroyers and there will be a delay in trying to check list of those saved with sailing list so it may be some time before we know actually who is lost.”

9 p.m., Sept. 4: “The Admiralty has informed the Embassy regarding the ATHENIA as follows: Survivors in one of the rescuing ships state that submarine was clearly seen and have no doubt that ship was torpedoed. From evidence up to date about 1000 have been saved out of a possible 1400, including crew. Evey (sic) effort is being made to find out if any United States citizens are killed or injured. The Admiralty state that no British mines were laid in the vicinity. Evidence of [Athenia’s] Chief Officer is that ship was torpedoed without warning. Submarine fired a round at ship on surfacing.”

Thus Kennedy’s eventful Monday ended with the ambassador unable to sort out the fates of more than 300 Americans who had been aboard the first British ship to be sunk in World War II. It would take nearly two more weeks to compile a final accounting of the living and dead.