Here are the top ten American aces based on their recorded kills or enemy planes that they shot down. 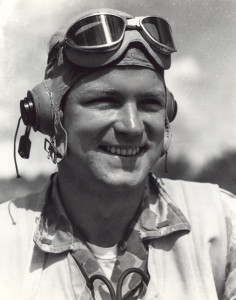 As Hanson’s posthumous Medal of Honor citation states without reserve, he was a bold, fearless, and aggressive fighter pilot who shot down a total of 25 enemy aircraft. Hanson, who had spent most of his youth in India as the son of Methodist missionaries, got his wings and a Marine Corps commission in February 1943, at the age of 23.

In the next year, before being shot down by Japanese flak on February 23, 1944, a day before his birthday, Hanson took out 25 Japanese aircraft. In one mission, he shot down four Mitsubishi A6M Zeros. In a six-day stretch, he shot 20 enemy planes out of the sky. 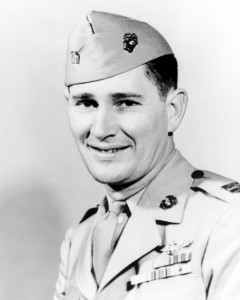 Foss, with 26 confirmed kills, ranks number nine on the list of U.S. fighter aces of World War II, but he holds the honor of being the Marine’s number one ace of the war. Foss worked harder than most to become a pilot, helping run the family farm after his father died, working side jobs to get through high school, college, and flight training, and having to fight the Navy and Marines’ age restriction to becoming a fighter pilot at the age of 26.

Foss, serving with the VMF-121 Marine fighter squadron, led eight Grumman F4F Wildcat fighters, which became known as Foss’s Flying Circus. His squadron was crucial to the U.S. victory over Japan at Guadalcanal, where his actions earned him the Medal of Honor. He later became governor of South Dakota. 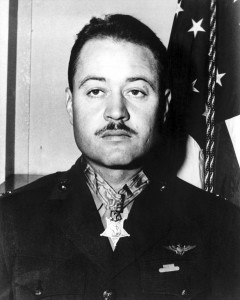 Medal of Honor and Navy Cross recipient Gregory “Pappy” Boyington also had 26 confirmed enemy craft shot down during duty with the U.S. Marines in World War II. However, interestingly enough and perhaps why Foss is credited as the top Marine fighter pilot of the War, Boyington also served with the 1st American Volunteer Group, known as the Flying Tigers, fighting Japan for the Republic of China before the U.S. entered the war. As a Flying Tiger, he shot down two confirmed enemy aircraft.

Boyington was a pilot for the Marines, then went to fight in China, and then joined the Marines again to fight for the U.S. in the Pacific. The Navy and Marines were in need of experienced pilots and Boyington earned his nickname “Pappy” as he was around a decade older than most of his fellow fighter pilots. 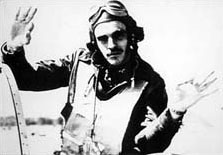 Preddy, the first U.S. Army Air Force pilot on our list comes in at number seven with 26 kills. Preddy served in the defense of Darwin, Australia, damaging two Japanese aircraft. He was transferred to Europe where he became the top U.S. ace flying a P-51 Mustang.

In one day, Preddy shot down six German Luftwaffe fighters. On Christmas Day, 1944, while chasing a Focke-Wulf Fw 190, just above the ground, Preddy was accidentally shot by U.S. anti-aircraft fire and killed. His brother, William, who was also a pilot, was killed almost four months later and buried alongside him. 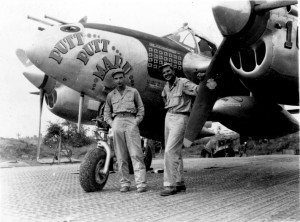 With 27 kills, MacDonald rings in at number six all around and number three in the pacific theater of U.S. fighter aces. MacDonald joined the U.S. Army Air Corps in 1938 and was stationed at Pearl Harbor when the Japanese attacked on December 7th, 1941.

MacDonald flew a P-38 Lighting, the same kind of versatile, long-range plane sent on the mission to shoot down the plane of the notorious Japanese Admiral Yamamoto.

Johnson was the first U.S. fighter pilot operating in Europe to beat the U.S. Word War I ace record set by Eddie Rickenbacker of 26 kills. It was his final mission on May 8th, 1944 that he broke this record and achieved his final total of 27.

Johnson was an Oklahoma Boy Scout who had wanted to become a fighter pilot since the age of eight. He developed a reputation as a lone wolf who would break away from his squadron to engage German fighters. His squadron commander was the next highest ace on our list, Francis Gabreski. 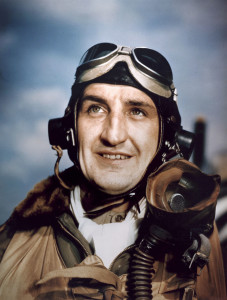 With 28 confirmed kills in World War II, Gabreski was the top U.S. ace in the European Theatre. More than that, he became one of seven U.S. fighter pilots to achieve ace status in two wars after combat missions in jet fighters in Korea.

The son of Polish immigrants, Gabreski suggested to the U.S. Army Air Force that he spend time with the British Royal Air Force’s Polish Fighter Squadrons, who had gained much experience and had a lot to offer the relatively inexperienced U.S. fighter pilots. He flew 20 missions with the Poles and even helped bring a couple of their pilots into the USAAF when they were still short on experienced pilots. 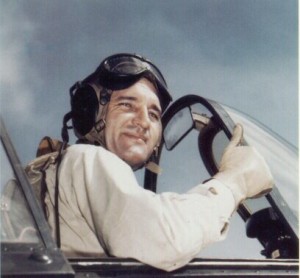 McCambell was the top U.S. Navy fighter ace of World War Two with 34 enemy aircraft shot down. The Alabama-born Medal of Honor recipient flew Grumman F6F Hellcats and in one plane alone scored 23.5 of his victories.

McCambell also holds the all-around U.S. record for number of kills in one day at nine. He achieved another seven kills in one day during the Battle of the Philippine Sea on June 19th, 1944, the aerial arena of which was dubbed by U.S. pilots as the Great Marianas Turkey Shoot, due to the lopsided thrashing they gave Japanese pilots. 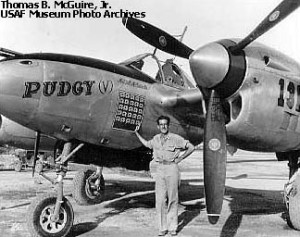 McGuire, just shy of the top spot on the U.S. fighter ace list with 38 kills flew in the 475th Fighter Group, commanded by fellow ace Charles M. MacDonald for 20 months beginning in late 1943. The Group was famous for their squadrons of P-38 Lightings, the pilots of which were among the most successful U.S. fighter aces of the war.

As stated in his Medal of Honor citation, McGuire became well known for gallantly assisting his comrades. In one incident, McGuire saw seven Japanese Zero fighters chasing a damaged P-38 and swooped in to help. He shot down three of the Zeros but was shot down himself. He survived the incident but was killed when his plane stalled and flipped during a very tricky, low altitude evasive maneuver on January 7th, 1945. 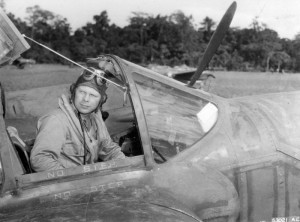 With 40 confirmed enemy aircraft shot down, Major Bong is the U.S. fighter ace of aces. By mid-1944, Bong had been promoted to V Fighter Command staff and wasn’t required to fly combat missions, but did so anyways and soon earned the Medal of Honor. His assigned fighter design was the P-38 Lightning, which he scored all his kills in.

Bong, who admitted to bad gunnery, compensated with daring and pulling in as close as he could to a target before firing. And it was only pilots with the most daring selected by the U.S. to test the turbojet airplanes set to redefine flight for the rest of the century.

On August 6th, 1945, while testing the first operational jet plane for the U.S., the Lockheed P-80 Shooting Star, the fuel pump malfunctioned and Bong was killed. His death was front page news, right under the lead story of the atomic bomb dropped on Hiroshima.