World War Two required the production of weapons on a massive scale. The war was also a time when weapons research and development took center stage. The strangest and most outrageous designs were tested and sometimes even brought into production.

Here is a list of what we think are the strangest weapons of WWII. The V-3 (Vergeltungswaffe 3) was a German World War II supergun working on the multi-charge principle whereby secondary propellant charges are fired to add velocity to a projectile.

The weapon was planned to be used to bombard London from two large bunkers in the Pas-de-Calais region of northern France, but they were rendered unusable by Allied bombing raids before completion. Two similar guns were used to bombard Luxembourg from December 1944 to February 1945.

The V-3 was also known as the Hochdruckpumpe (“High Pressure Pump,” HDP for short), which was a code name intended to hide the real purpose of the project. It was also known as Fleißiges Lieschen (“Busy Lizzie”).

Only two V3s were built and only one small version saw action against Luxembourg during the battle of the Bulge. Schwerer Gustav (English: Heavy Gustaf or Great Gustaf) was the name of a German 80 cm railway gun. It was developed in the late 1930s by Krupp as siege artillery for the explicit purpose of destroying the main forts of the French Maginot Line, the strongest fortifications then in existence. The fully assembled gun weighed nearly 1,350 tonnes, and could fire shells weighing seven tonnes to a range of 47 kilometres (29 mi).

The gun was designed in preparation for the Battle of France, but was not ready for action when the battle began, and in any case the Wehrmacht’s Blitzkrieg offensive through Belgium rapidly outflanked and isolated the Maginot Line’s World War I-era static defenses, forcing them to surrender uneventfully and making their destruction unnecessary. Gustav was later employed in the Soviet Union at the siege of Sevastopol during Operation Barbarossa, where among other things, it destroyed a munitions depot buried in the bedrock under a bay.

The gun was moved to Leningrad, and may have been intended to be used in the Warsaw Uprising like other German heavy siege pieces, but the rebellion was crushed before it could be prepared to fire. Gustav was destroyed near the end of the war in 1945 to avoid capture by the Red Army.

It was the largest-calibre rifled weapon ever used in combat, the heaviest mobile artillery piece ever built in terms of overall weight, and fired the heaviest shells of any artillery piece.[1] It is only surpassed in calibre by the British Mallet’s Mortar and the American Little David mortar (both 36 inch; 914 mm)

After France had fallen in the summer of 1940, Prime Minister Winston Churchill promised to “set Europe Ablaze”. The SOE (Special Operations Executive) was founded and was equipped with an assortment of highly experimental weapons and gadgets. Among them was the exploding RAT.

Rat carcasses were filled with plastic explosives, and were to be distributed near German boiler rooms, where it was expected they would be disposed of by burning, with the subsequent explosion having a chance of causing a boiler explosion.

The explosive rats never saw use, as the first shipment was intercepted by the Germans; however, the resulting search for more booby trapped rats consumed enough German resources for the SOE to conclude that the operation was a success.

The Japanese developed a special aircraft called the Ohka for use in kamikaze attacks.  This “piloted bomb” would be attached to the belly of a carrier plane, then released upon reaching the target area.

The pilot would steer the aircraft as it glided toward the target; then rocket engines would be ignited to speed up the aircraft in order to hit the target with force. Anti-tank dogs were dogs taught to carry explosives to tanks, armored vehicles and other military targets. They were intensively trained by the Soviet and Russian military forces between 1930 and 1996 and used in 1941–1942 against German tanks in World War II.

Although the original dog training routine was to leave the bomb and retreat so that the bomb would be detonated by the timer, this routine failed and was replaced by an impact detonation procedure which killed the dog in the process.

The U.S. military trained anti-tank dogs in 1943 for use against fortifications, but never deployed them. Dogs strapped with explosives were unsuccessfully used by Iraqi insurgents in the 2000s. 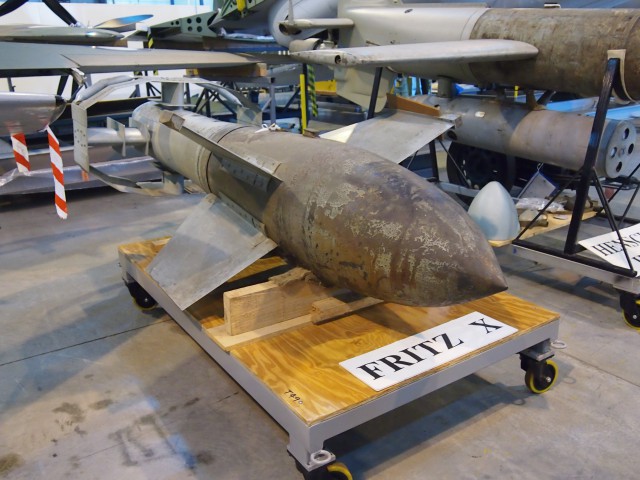 Fritz-X was a radio-controlled bomb developed by the Nazis to destroy naval vessels. It had specially-made wings and tail that could be remotely adjusted to guide the bomb to its target. A drawback, however, was that the deploying aircraft had to remain directly over the target in order to send signals to the bomb, which left the planes exposed to anti-aircraft fire and subject to heavy losses.  Another radio-controlled German bomb was the Henschel HS 293, which would glide to its target.

Fritz-X was first deployed on 21 July 1943 in a raid on Augusta harbor in Sicily. A number of additional attacks around Sicily and Messina followed, though no confirmed hits were made and it appears the Allies were unaware that the large bombs being dropped were radio-guided weapons.

On 9 September, the Luftwaffe achieved their greatest success with the weapon. AThe Italian battleship Roma, flagship of the Italian fleet, received two hits and one near miss, and sank after her magazines exploded. 1,255 men, including Admiral Carlo Bergamini, died. Her sister ship, Italia, was also damaged but reached Tunisia. The unrotated projectile, or UP, was a short range rocket-firing anti-aircraft weapon developed for the Royal Navy to supplement the 2 pounder pom-pom gun due to a lack of close-range anti-aircraft weapons. It was used extensively by British ships during the early days of World War II. The UP was also used in ground-based single and 128-round launchers known as “Z batteries”.

The name “unrotated projectile” comes from the fact that the projectile was not spin-stabilized. The weapon had 20 smoothbore tubes, fired ten at a time.

A small cordite charge was used to ignite a rocket motor which propelled the fin-stabilized 7-inch (18 cm) diameter rocket out of the tube to a distance of about 1,000 feet (300 m), where it exploded and released an 8.4 ounces (240 g) mine attached to three parachutes by 400 feet (120 m) of wire.

The idea was that an aeroplane hitting the wire would draw the mine towards itself where it would detonate. The X class was a World War II midget submarine class built for the Royal Navy during 1943–44.

Once the attack was over, the X-Craft would rendezvous with the towing submarine and then be towed home. The range was limited primarily by the endurance and determination of their crews but was thought to be up to 14 days in the craft or 1,500 miles distance after suitable training.

Actual range of the X-Craft itself was 500 nmi surfaced and 82 nmi at 2 knots submerged.