War is often associated with cutting-edge technologies, which have altered history by changing the outcome of many conflicts. The invention of the bayonet, aerial combat, and the nuclear bomb are just some examples. As impressive as those weapons were, there have been many other inventions that were complete and utter failures.

Arguably at the top of that list of failures is a device whose test left generals and ordinary citizens running for their lives while a dog chased an errant rocket down the test site.

This device was called the Panjandrum and it was one of the worst ‘fails’ in modern military history. It was built by the British during World War II in the hopes of breaking down the German forces on the beaches of Normandy, during D-Day.

The weapon called for a bunch of rockets to be installed on two large wheels that were joined by a drum-like axle packed with explosives. The rockets would then detonate at the intended target, or at least that was the idea.

The Panjandrum was projected to break through the concrete Atlantic Wall in order to create a gap wide enough for tanks to penetrate. The theory seemed flawless and the weapon was thought to be feasible and an effective. It would allow the British to storm the beach without sending a large numbers of soldiers to face lethal enemy fire. However, a plan and execution are two very different things in war. 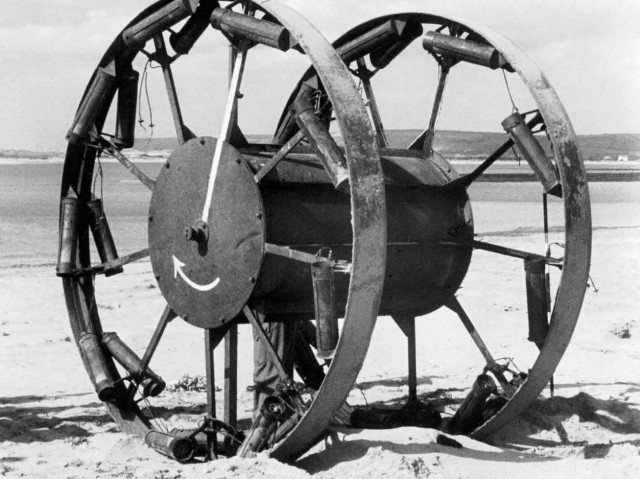 Initially the notion for this weapon came from C.R. Finch-Noyes, a British wing commander, who had designed other weapons used in World War II. He came up with the predecessor to the “Dambuster” that was used to attack German dams in 1943. The Directorate of Miscellaneous Weapons Development, which was affiliated with the British Navy, actually built the Panjandrum.

The device’s name was a reference to the “Grand Panjandrum,” a character dreamed up by 18th century British dramatist Samuel Foote. In 1943 after the Directorate built the first official prototype of the Panjandrum in London, it was shipped to a village located near the sea in southern England for testing. The beaches there resembled the one that would be stormed on D-Day, which made for a good testing field.

The Panjandrum was equipped with two 10-foot wheels made of steel and inset with 70 slow-burning cordite rockets. Fortunately, for the test the engineers, they packed the drum axel with sand instead of explosives. The test was intended to highlight some of the potential flaws in the weapon, and it did just that, proving that the Panjandrum would be extremely difficult to control.

A giant two-wheeled weapon flying around shooting off rockets uncontrollably was not going to be effective. It would pose as much as danger to British troops and the Germans.

The project leader, Nevil Shute Norway (an Australian aeronautical engineer and novelist) knew there needed to be more efforts put forth to find a solution. He installed a third wheel on the Panjandrum in hopes of creating more stability, but the idea was ineffective.

The next idea was a huge steering system using cables, but even that was unable to accommodate for the changing rolling resistance from the sand on the beach, which meant that one wheel was always operating at a faster rate and the machine was therefore uneven and erratic. As the weapon would increase in speed (it could reach 60 mph), the problem only got worse. Panjandrum after an unsuccessful test [Via]

Finally, after many months of tweaking, the Directorate decided it was ready to conduct a more high-profile test. It was January 1944 and the military brass was on site. The start was promising as the rockets began firing; it was rolling straight, and actively gaining speed. However, the test went south quickly. According to two witnesses, the old problems soon reared their ugly heads.

As the rockets continued to fire the Panjandrum spun erratically, and people (generals included) went running for cover. The cameraman was almost bowled over, and eventually the machine disintegrated. The dog of one of the army officers, present, chased down one of the rockets strewn on the beach.

A fail of that proportion was clear and irrefutable proof that this idea was not a good one. There was no way it could effectively plow through the Atlantic Wall. It meant back to the drawing board to figure out a new way to defeat the Germans.

In 2009, on the 65th anniversary of D-Day, a fireworks company exhibited a smaller version of the device that they had replicated. One major difference was the machine was loaded with fireworks instead of explosives.

In fact, it was used at the same beach as the failed test that had taken place decades earlier. The mini Panjandrum went straight, but only for about 50 meters before breaking down 450 meters premature of the intended distance.

Some theories are intended to stay theories, because some ideas simply don’t work. Fortunately the ineffectiveness of the Panjandrum was found out before the Allies stormed those Normandy beaches.

In 2009, for the 65th Commemoration of D-Day it was rebuild for the Appledore Book Festival which launched this WWII D-Day attack prototype. Unfortunately that launch turned out to be a disappointment too as the replica only managed to travel 50 out of the intended 500 meters.

Short clip of the replica Panjandrum:

The only real achievement of this weapon was the appearance in one of the episodes of Dad’s Army: