The George Cross remains one of the highest military honors that can be given in the United Kingdom.  Second only to the Victoria Cross, it was created in 1940 at the height of the German blitz on London a manner to recognize the great civilian courage it took to endure those dark days.  As such, it has a particular civilian emphasis while still being given to members of the military for actions that don’t quite fit a traditional military honor.

It is a high honor for an individual to receive the George Cross and an even more fascinating award when you consider it was given to an entire island nation at once.  For this is the story of the people of Malta, the island nation that defied the Fuhrer.

The Island Fortress of Malta

Granted, Malta was not its own sovereign state at the time, but the people of Malta certainly comprised a nation by any definition.  Malta has long been at the crossroads of history given its unique position in the Mediterranean and has been the target of heroes and despots alike.  Only 122 square miles in size, this small piece of real estate would prove to play a role disproportionate to its size in the course of human events.

Unfortunately for this particular generation, that significance put them squarely in the sights of Adolf Hitler.  Since June of 1940, the island nation would find itself under almost constant attack from both German and Italian Air Forces.  Resupply and reinforcement from the air was understandably difficult and German U-boats wreaked havoc on attempts to resupply by sea.

While the people of Malta endured these early years of war with grit and fortitude, their most harrowing season would come in 1942.  Starting in January and going on through July, it was reported that there was only one 24 hour period where bombs did not fall on Malta.  Dreaming of an invasion, Hitler ordered the island to be “neutralized” at all costs.  Hitler planned to starve the people of the island while simultaneously pounding them with death from above.  And while these heavy costs were paid in full by the people of Malta, they did not relent.

The people of Malta spent so much time underground in shelters, ancient catacombs, and bunkers that disease began to run rife through the community.  Digging in became a way of life as the German onslaught persisted.  Food became desperately short and one survivor recounted that transportation became a major problem because all the horses had been eaten.  When you consider the size of the island, it is not hard to imagine that literally every square mile of the island was touched in some way by the terror of the Luftwaffe.  The people of Malta had every reason to relent and give up, but history would prove them not so easy to break. 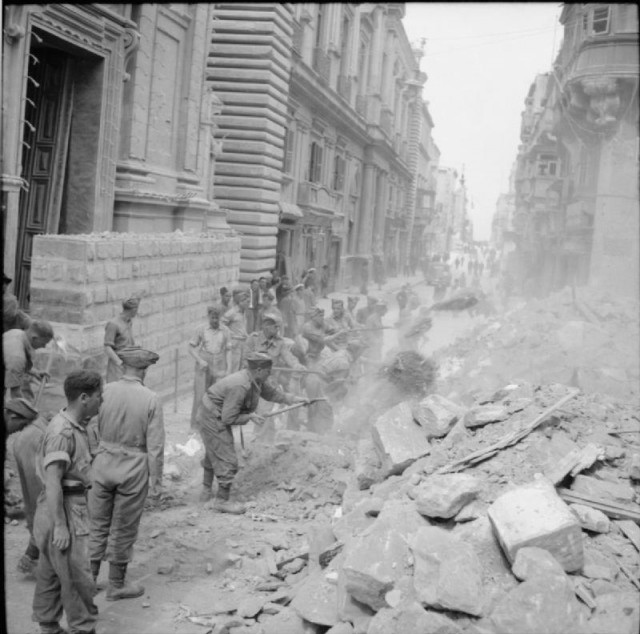 King George awarded the George Cross to the people of Malta at the height of the siege in April of 1942.  He stated that it was “to bear witness to a heroism and a devotion that will long be famous in history.”  The resistance of the people of Malta was not just a feel good story about endurance, but a military feat of immense strategic significance.  Had the Axis powers taken Malta it would have significantly altered the tactical landscape of the Mediterranean and prove to be a costly invasion for the Allies to take it back.

With the Germans starting to take heavy losses in North Africa, attention diverted away from Malta and the siege effectively ended by November of 1942.  From this point forward, Malta would play a heavy offensive role.  From the strategic island location halfway between North Africa and Italy, the Royal Air Force began to pound Axis naval forces and shipping.  After all, it only seems fair that the Axis forces in North Africa feel the pain of hunger as their much-needed supplies from Europe were sent to the bottom of the Mediterranean.

By May of 1943, Air Forces launching from Malta had sunk 230 Axis ships in just 164 days which would prove to be the highest Allied sinking rate of the entire war.  The last German air raid on Malta took place on July 20th, 1943 in which would be the 3,340th attack since June of 1940.  Malta would go on to provide strategic air cover to forces massing for the invasion of Sicily.  And with the fall of Italy, war would finally take place from a distance for the people of this tiny island nation who just a short timer earlier were on the brink of starvation.

If you ever wonder what the George Cross means to the people of Malta, you need but look at their flag for an answer.  For in the top left corner of the flag, you see the George Cross itself.  To have had that honor awarded during the height of the siege gave the people of Malta a source of pride and the reminder that the world was watching their fortitude.  It let them know that although they are surrounded by the enemy, they are not forgotten.

A modern ferry would get you to Malta from Sicily in less than a couple of hours and yet the entire might of the German and Italian forces couldn’t take it. A remarkable story of resilience in the face of an enemy who conquered a continent.   There wasn’t man, woman, or child who could escape the harsh realities of life on that island and for that, an entire nation so rightly deserved the George Cross.