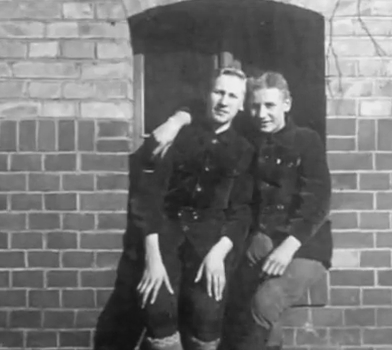 Heinz Siegfried Heydrich  was the son of Richard Bruno Heydrich and the younger brother of SS General Reinhard Heydrich. After the death of his brother, Heinz Heydrich helped Jews escape the Holocaust.

Heinz Heydrich was born in Halle an der Saale to composer Richard Bruno Heydrich and his wife Elisabeth Anna Maria Amalia Krantz. Her father was Eugen Krantz, director of the Dresden Royal Conservatory.The Heydrich family were well-to-do Catholics. The father, Richard Bruno Heydrich, was an opera singer, the founder of a music conservatory in Halle, and a German Nationalist who instilled patriotic ideas in the minds of his three children. The Heydrich household was very strict and the children were frequently disciplined. As a youth, Heydrich engaged his older brother, Reinhard Heydrich, in mock fencing duels.

Career in the SS

Heinz Heydrich was a lieutenant in the S.S. Originally, he was very proud of his Nazi association and his older brother’s position within this unique organisation. He was a journalist by trade, and published the party newspaper. He continued his active association with the S.S. until June of 1942.

Early in June, Heinz’s older brother Reinhard died, asassinated by resistence-members in Czechosolvakia. His car was ambushed at a blind corner in a road and he was mortally wounded, dying a few days later in hospital. It was this event that changed everything. Almost overnight, Heinz received a bundle of Reinhard’s personal papers and files…included in these were detailed plans about the “Final Solution”, in which Reinhard had been heavily involved.

Next morning his wife noticed that her husband had sat up all night burning the documents from the package. Heinz, on leave from the front, could not be engaged in conversation, his wife remembered; he seemed to be elsewhere mentally, and like stone. The files in the package were probably Reinhard Heydrich’s personal files, from which Heinz Heydrich understood for the first time in all its enormity the systematic extermination of the Jews, the so-called Final Solution. Thereafter, Heinz Heydrich helped many Jews escape by forging identity documents and printing them on Die Panzerfaust presses. 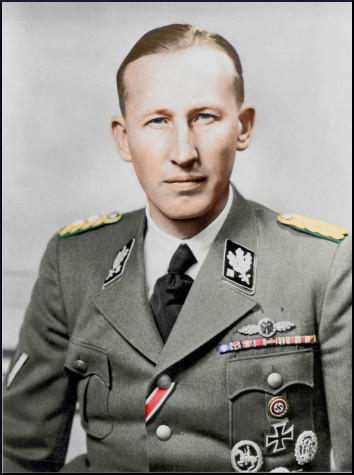 Realising fully for the first time what he’d signed up for when he joined the S.S., Heinz was horrified. He burnt most of the papers in disgust.

Soon after this event, Heinz began to realise that he was in a truly unique position. Being the brother of a prominent S.S. general (albeit, a dead one), and being the editor of the party newspaper meant that he had a lot of influence. He used this to help as many Jews as possible escape from Germany. As a writer and editor of the party newspaper, Heinz had access to a commercial printing-press. He used this to print fake travel-documents which he signed and forged and stamped, and gave to Jewish families, so that they could escape from occupied Europe to countries of safety.

When in November 1944 an economic commission headed by a State Attorney investigated the editorial staff of Panzerfaust, Heinz Heydrich thought he had been discovered and shot himself in order to protect his family from the Gestapo. Ironically, the attorney knew nothing about the forgeries, and was only trying to find out the reason for shortages in paper supplies. Heinz Heydrich is buried in the Soldatenfriedhof (soldiers cemetery) Riesenburg, according to the Deutsche Dienststelle (WASt).

Heinz Heydrich had five children. His oldest, Peter Thomas Heydrich (1931–2003), was a well-known German cabaret singer, and wrote a book about his childhood, father, and uncle. In the book, Peter Heydrich describes how, as a youth, he enjoyed the fame of being a “crown prince,” the nephew of Reinhard Heydrich. During boyhood, he thought of his uncle as a successful sportsman and a sensitive musician. In Prague, Peter observed that his uncle had become a “high animal.” Peter derived many privileges from being Reinhard Heydrich’s nephew. Even after the war, Peter still felt some pride in the familial relationship, if not so openly. But finally, Peter Heydrich had to admit that Reinhard Heydrich was a protean schemer, who planned and executed the Holocaust and other crimes.