What most of us remember about World War II from history classes boils down to who fought who, the Holocaust, the Nazis and how almost all participant countries sacrificed their economies and their people’s lives for winning the war.

I’m pretty sure they don’t tell kids in any school in the world about these 5 unbelievable true stories about WWII.

Teachers usually stick to their schedule, but you would’ve paid more attention in class if they were talking about these insane stories that will give you goosebumps.

Few people would connect broomsticks, witches, and crop-sprayers to a feared group of female Russian pilots. The women pilots were members of the 588th Night Bomber Regiment of World War II. Even today not many people know about these female pilots who did so much to support their male comrades by the accurate bombing of German troops.

These women were usually aged 17 to 26 years of age used to fly on night-time bombing missions. When approaching their target, they would idle their engines and glide into their bombing points.

This largely silent approach gave off a “whooshing” sound as they went by, causing the Germans to liken it to the sound of the broomsticks of witches and thus arose the name of “Nachthexen’ – Night Witches!

These girl-pilots harassed the Germans to such an extent that they were both hated and feared by them. It was said that any German pilot who managed to bring down one of the planes of a Night Witch would automatically be awarded the Iron Cross. It is no wonder that these intrepid girl-pilots bore the name ‘Night Witches’ with pride!

Right before the end of World War II, the Germans sent all of their secret weapons in a submarine to Japan. The Nazis had apparently never heard that you don’t send all your secrets together.

A significant amount of uranium was among those weapons, so the Nazi and Japs decided to use it to make a radioactive bomb constructed especially for the west coast of the United States.

With a kamikaze submarine, a plan, and an idea, but they lacked the uranium they needed. You are probably wondering why. Well, the Americans had intercepted the German submarine on its way to Japan.

While it isn’t actually documented, it has been rumored that the uranium owned by the Nazis was used in the atomic bomb that was dropped by Americans on Hiroshima. The Japanese didn’t give up without the uranium; they felt they could use the kamikaze submarine could still do damage.

If the Japanese had only been as organized and as precise as the German military, they probably would have been successful. Just two days before the submarines were going to strike the Panama Canal, the Japanese surrendered.

The submarines ended up being destroyed by the U.S. Navy for a happy ending. 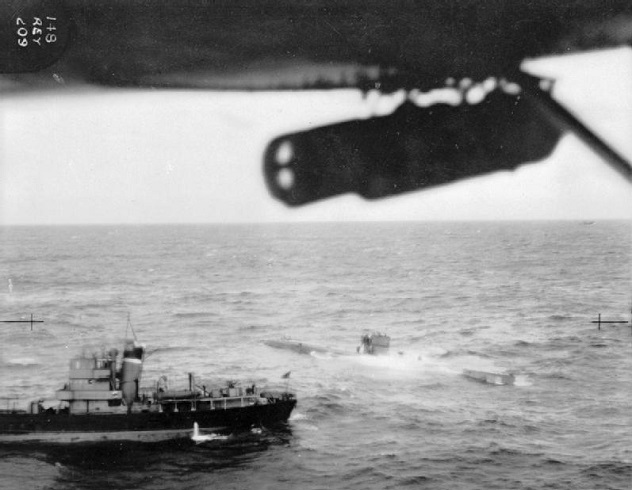 In 1941, the submarine U-570 went into service for the German Navy. It was based in Norway and was under the command of Captain-Lieutenant Hans-Joachim Rahmlow. Though an experienced naval officer, this was Rahmlow’s first time to captain a submarine.

On August 23, the B-Dienst intercepted British communications regarding a large group of Allied merchant ships off Iceland. Sixteen U-boats were ordered to sink them all, and the following morning, the U-570 set off to do just that – her very first war patrol.

By August 27, the U-570 had been in rough seas for several days and everyone was suffering from seasickness. Some were so badly ill that they became completely bedridden. Desperate for some respite, Rahmlow ordered the submarine close to the surface, which was against regulations and contrary to his training.

In the clear waters off Allied-occupied Iceland, it was clearly visible from the air. Which was how British Sergeant Leslie “Les” Bathy Mitchell of 269 Squadron spotted it, however, his attempt to throw depth charges failed, as his bomb-racks jammed and wouldn’t release. Furious, he called out the U-boat’s position.

Captain Rahmlow wasn’t aware of this. At 10:50 AM, the U-570 breached the surface… right below 269 Squadron Leader James Thompson. Once he got over his shock, Thompson circled back and flew low as he made a beeline toward the submarine. Rahmlow had just stepped onto the bridge when he heard the plane’s engine through the submarine’s hull. He ordered the vessel to dive, but it was too late.

Thompson released four 250-pound depth charges, and this time, the mechanism did not jam – they plunged into the water at an angle of 30° to the vessel’s rear. The U-570 sped forward as it dived, avoiding a direct hit. Thompson’s last depth charge also missed… but it didn’t matter. It detonated some 10 yards away from the submarine. The combined force of the explosions slammed into the U-570, but the last one did the trick.

The submarine almost rolled over then settled. The vessels power failed, and this was followed by water leaking into the vessel. In the engine room, acid leaked from battery cells and mixed with water, formed a gas.

Thinking it was chlorine (it wasn’t), the engineers panicked. Rahmlow ordered them to surface while signaling the crew to don life-jackets and get up to the conning tower. Thompson thought they were trying to man their deck guns, so he made another pass and began firing, but stopped when he saw them wave a white flag. Having trained them for months, Vera Atkins sent 400 agents out into the field. She taught them the skills they needed and came up with a believable account for every detail surrounding their new identities.

When the war came to an end in 1945 with more than 100 agents missing, it became her personal mission to find these missing women on her own. She did so by convincing others to let her join the British War Crimes Commission.

Because of her reputation for ruthless interrogation skills, one of her reports indicates that she had Auschwitz’s commandant giving his admission to his horrible crimes one morning before lunchtime.

She participated in several investigations and used the information to help with her own search for her missing spies. She incorporated sketches from an artist who had lived through multiple concentration camps, scanned the lists of names carved on the walls of jail cells, and intercepted letters as part of her efforts.

After her return to the U.S., Atkins decided to focus on memorializing and publicizing her agents who remained missing. She even made brief appearances in some movies made about the lives of the spies.

Being a secretive woman, no movie has been made about Atkins and her role with the spies or her loyalty to those missing agents.

The One Man Diamond Heist The Netherlands became the victim of Nazi occupation during May 1940. After invading, the Germans had their eyes set on a diamond cache that was held in Amsterdam.

Lt. Col. Monty Chidson, a real spy who was working in Den Haag, a Dutch city, decided he would steal the diamonds if a German invasion occurred to keep the Nazis from taking the precious jewels.

Only with a diamond market key and a few clues for opening the vault, he made his way to Amsterdam and entered the abandoned market. He spent the next 24 hours trying to get into the safe as Germans got closer.

After hearing people near the market, he finally cracked the vault and escaped with the diamonds.

He got them back to England so they could be given back to the royal family and exiled Dutch government.

The Man Who Was Awarded 2 Victoria Crosses

When you have thrown on your first Victoria Cross, you have entered an elite fraternity in the history of war that commands the respect of all those to ever wear a uniform.  When you have earned your second and lived to tell about it, you are suddenly the only combat soldier to have ever done so.

Only three men in history have earned a second VC. The other two who managed this feat were medical officers: Col A Martin-Leake, who received the decoration in the Boer War and the First World War; and Capt N G Chavasse, who was killed in France in 1917. Chavasse’s family was related to Upham’s.

As such, the world should pause for a moment and take in the unsurpassed gallantry displayed by the man from New Zealand that the Germans couldn’t seem to keep down.

Charles Upham picked up his first Victoria Cross in Crete in 1941 where his citation contained so many individual acts of gallantry it is hard to pick out the one that put him over the top.

His second Victoria Cross would come during the First Battle of El Alamein in 1942 that would end with him bleeding out, unable to move, and subsequently captured by the Germans.

As a POW, he made so many attempts to escape that he was finally interned at Colditz Castle for the remainder of the war.

When he would emerge in 1945, he would do so as the only man to receive two Victoria Crosses in the war – a source of great pride for New Zealand.