The advance on Berlin in early 1945 didn’t only mark the final stage of World War Two in Europe. It also saw the first open expression of the tensions between the Soviets and the Western allies, tensions which would soon evolve into the Cold War. 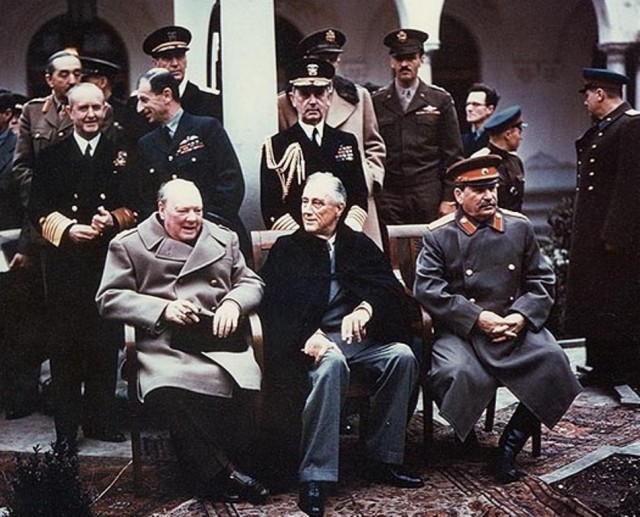 There had always been tensions in the alliance between the Western powers, in particular, Britain and America, and the Soviet Union. Conservative, Capitalist and pro-democratic politicians in the West fervently disagreed with the Communist dictatorship in the East.

British Prime Minister Winston Churchill had been a fervent anti-Communist since the early days of the USSR and had taken a leading role in the 1919 intervention that tried to suppress the nascent Communist nation. He even considered re-arming Germany once Hitler was gone, to oppose Russia. Hitler’s dreams of bringing Britain into an alliance against the Russians were not as unrealistic as they now seem in retrospect.

Stalin, meanwhile, was ambitious to expand the influence of his state and its ideology.

2. The Face of Agreement Capturing the German capital of Berlin would be of enormous symbolic and political importance. Stalin wanted his forces to do it, while Churchill wanted to stop them.

Despite this, the American General Eisenhower recognised that there was more to gain through cooperating with Stalin. The two, therefore, agreed to a plan where their forces would meet near Dresden, with Russia pulling its main effort away from Berlin, which it would not attack until May.

Believing that the Allied agreement was a trick, Stalin immediately ordered two rival field marshals, Koniev and Zhukov, to advance on Berlin. Both developed plans of attack, but Zhukov was closer, and so was given the order to make the main assault. Maintaining the competition between the two for political reasons, Stalin gave Koniev permission to also launch an attack.

There was now a race for Berlin within the Soviet camp, as well as against the Allies. On 16th of  April, the attack on Berlin began.

Among the western allies, the British General Montgomery had the most momentum, but his proposal for a fast advance on Berlin was rejected by Eisenhower. Up until this point, much of the Allied resources had been poured into supporting the British. Now they were shifted to American troops.

On the 15th of April, American forces under Lieutenant-General Simpson crossed the Elbe. Only the  German 12th Army under General Wenck stood between them and Berlin, but Eisenhower ordered Simpson to hold back until they had linked up with the Soviets at Dresden.

The next morning, Zhukov’s assault began.

The Germans prepared to defend Berlin. Hitler removed Himmler as head of the Vistula army group,  replacing him with Colonel-General Heinrici, an expert in defensive warfare.

Outside Berlin, Heinrici pulled his men back so that Zhukov’s bombardment missed them, then dug them in on Seelow Heights, blocking the main road. The Germans were halted, and a furious Stalin ordered Koniev to advance on Berlin.

The capital was caught in a pincer movement between Zhukov and Koniev.

6. Meeting at the Elbe

Meanwhile, both Soviet field marshals sent troops to meet Simpson at the Elbe, to make a show of keeping the Allied agreement and so preventing an American advance into Berlin. Given the deep suspicion with which the Germans viewed Communist Russia, and the atrocities on the Eastern Front, it was likely that the Americans would face far less resistance and have an easier time advancing into the doomed city.

When the forces met at the Elbe on 25th of April, they found that there were no Germans facing them. Wenck had been pulled back to help defend Berlin.

Propaganda minister Goebbels labeled the city “Fortress Berlin”, but it was not much of a fortress. Its defenders were 90,000 children of the Hitler Youth and old men of the Volkssturm, Germany’s equivalent of the Home Guard.

Top Nazis such as Göring, Himmler, and Speer fled the city. Himmler was later sacked for reaching out to the British and Americans about making peace, and he too fled. Hitler even sacked Göring, his designated successor, for trying to take over command.

Seeing his fortress collapsing around him, Hitler committed suicide on the 30th of April.

By now, the Soviets had won the race, but the competition between Koniev and Zhukov was still on. With victory clearly theirs to take, Koniev was ordered to halt so Zhukov’s men would have the honor of taking the Reichstag and raising the Red Flag over it.

That order must have stung for Koniev, who had come from behind to become a frontrunner in the race. But, in the end, it would be Zhukov’s undoing. The boost to his reputation made him so popular that Stalin saw him as a threat, and banished him the following year.

An estimated 200,000 Germans and 150,000 Russians died in the fall of Berlin, but the carnage was not over. Even as Germany’s surrender was being negotiated, Soviet troops went on a rampage. As soldiers have done throughout history upon capturing an enemy settlement, they looted, drank and took out both their anger and their pride on the innocent occupants. An estimated 100,000 women were raped, and many of them shot afterward. In one district alone, 215 women committed suicide to avoid this fate.

Though the Soviets had taken Berlin, it would not be entirely theirs. At the Yalta conference in February, the Allies had agreed to divide the city between them. America, Britain, and France soon brought their areas together to form West Berlin, an island off the west amid the Soviet-controlled sea of East Germany.

With the Second World War over, the Cold War began. Russia had already won the first battle – the race to Berlin. The city was also to play a very important role in the Cold War, and the fall of the Berlin Wall in the city effectively ended this ideological and strategic conflict.