The US Air Force’s B-29 Kee Bird was a Superfortress class aircraft. This craft belonged to the 46th Reconnaissance Squadron. This craft was stranded following an emergency landing in Greenland, in the northwest area. It was in this location taking part in a Cold War mission, secretly spying. The emergency landing happened on February 21st, 1947.

Luckily, an evacuation was carried out successfully, and the entire crew managed to get to safety. The Kee Bird, however, was left in the Arctic Tundra at the site where it had landed. The aircraft sat there undisturbed for many years. It wasn’t until 1994 that a mission (privately funded) was set up to try to make repairs and return it.

July 1994 saw a group of specialist aircraft restorers (Kee Bird Limited Liability Co.) arrive at the aircraft’s resting place. This team was led by Darryl Greenamyer. The Kee Bird was still intact, following its crash landing; having landed on a lake that was frozen.

The U.S Air Force had relinquished any claim it may have had to the B-29 and the team of restorers believed they could restore the craft to a condition that was would render it able to fly, fly it off the lake and then ferry it back to Thule (Greenland) where more specialized repairs could take place before moving it back to the United States.

The team flew to the Kee Bird’s location with their many specialist tools and equipment and spent the next few months transporting extra parts they felt were needed (engines, propellers, tires and more).
The engine and propellers were replaced successfully by the team; the tires were replaced, and they gained access to the Kee Birds controls. Unfortunately, the weather conditions meant their plans had to be halted, and so the team left the site.

Using a shuttle plane, the team departed the U.S. Armed Services base at Thule and flew in tools and equipment to the Kee Bird. Over the summer months, the team transported four re-manufactured engines, four new propellers, an engine hoist, and new tires, as well as a small bulldozer, to the remote site.

The team successfully replaced the engines and propellers, mounted the new tires, and resurfaced the aircraft’s control surfaces. Although the plane was nearly ready to fly, Greenamyer’s team was compelled by weather to leave the site.

In May 1995, Greenamyer returned with additional personnel. The repairs begun in 1994 were completed, and the aircraft prepared to take off from the frozen lake on 21 May 1995. A crude runway was carved out of the snow on the ice using the small bulldozer that had been ferried to the site.

It wasn’t until May 1995 when Darryl returned with help; they started by completing the original repairs that had been started on their last visit and prepared for takeoff. A bulldozer carved a makeshift runway in the snow. The engines started, and the craft was ready for takeoff; however whilst moving towards the runway a gasoline leak occurred (stemming from the auxiliary power units fuel tank). The gasoline leaked into the fuselage which started a fire that quickly spread to the rest of the craft. 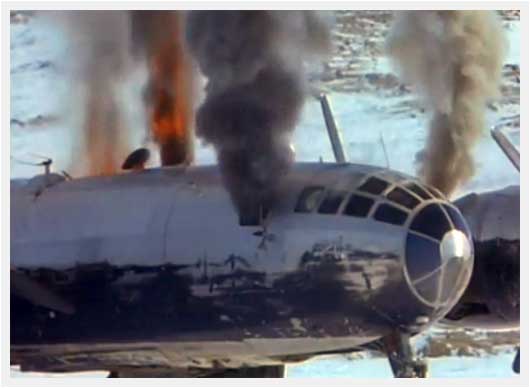 Attempts to put the fire out failed and the fire spread through to the entire fuselage; it destroyed the surfaces on the tail and fuselage. The rescue attempt was abandoned, and the general consensus was that the B-29 would sink in the lake once it thawed in the spring.
The aircraft still sits on the surface of the lake, on an ice shelf (as of 2008)