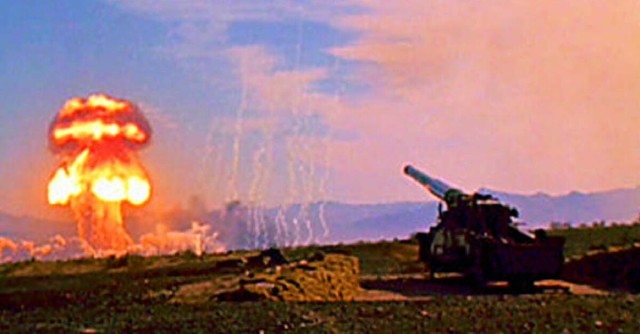 In the early 1950s, nuclear weapons development and nuclear testing was a key priority for the US and the Soviet Union. It was a race to see who could develop the most devastating nuclear devices to showcase each country’s power.

In the US, Operation Upshot-Knothole was central to the Department of Defense’s nuclear weapons programme. The operation tested 11 nuclear weapons of various sizes and impact in Nevada, north of Las Vegas.

One of those tests was for Shot Grable. It was transportable artillery and could fire 800 lb. shells seven miles. What made this device different was that the shells used gave a massive boost to the explosion – comparable to 15,000 tonnes of explosives.

The Department’s test site had been set up to have everyday objects and equipment present so that each bomb’s impact in a real life situation could be ascertained. The site had trees, cars and trucks, homes and buildings, railways, trains, and bridges. All of these would be placed at different distances from the bomb’s detonation point to see how far the explosion could reach and its impact at varying distances.

Before Shot Grable was tested a regular 27 kiloton nuclear bomb called Shot Encore was tested in the same area and was dropped at just under 3000 feet.

Shot Grable was fired on May 25th, 1953 and exploded with accuracy at around 500 ft. above the ground and, to great surprise, caused much more damage than Encore because of its subsequent post-explosion very destructive waveform called a “precursor.”.

A precursor is a very strong dynamic wind which emanated from the explosion because of the bomb’s oblique angle of approach and its high horizontal speed. It swept across the test site, causing far more destruction than expected from this smaller nuclear bomb.

Objects that were in the way of the explosion were ripped to pieces and flung hundreds of feet from their original position. While Encore’s explosion had a similar impact, it did not have the same effect on the objects, leaving them standing in the place they were positioned before the blast.

With such a powerful weapon in their hands, the US produced twenty Shot Grable cannons and eight missiles. As nuclear technology developed, the Shot Grable was superseded by newer, improved technology and weaponry.

By the early 1990s, the Cold War had come to an end, and the US and the Soviet Union signed agreements to ensure their nuclear arsenals would be reduced, thus posing no threat to either country.