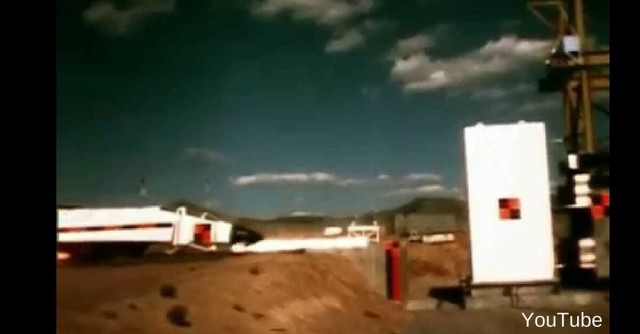 The US Government wanted to test what would happen if a plane crashed into the concrete walls of a nuclear power station. For this they used an F-4 Phantom jet, a two seater jet that, fully loaded, weighs up to 41,500 lb.

The Phantom was bolted to a two rail rocket sled to prevent it from taking off as it races towards the wall at almost 500 Mph.

A fully functional F4  was used in the impact test.Only the gears and flaps at the main wings were partly removed and replaced by a carriage structure and sleds. The target wall was a reinforced concrete block measuring 23ft square and having a thickness of 12ft.

The plane completely disintegrates on impact, it just turns into dust as it hits the wall but more importantly, the wall that is designed to move and absorb the impact, has done very well proving it can protect a nuclear power station.

More importantly, the wall that is designed to move and absorb the impact, has done it’s job, proving it can protect a nuclear power station.